Starting with leading indicators, the latest Conference Board table is a sea of green:

Global money supply suggests a flattening out of industrial output in mid-year, but at good growth levels:

In short, the global picture looking out on the horizon is good.

However, with coincident data, things look different. Economic surprises have tumbled of late: 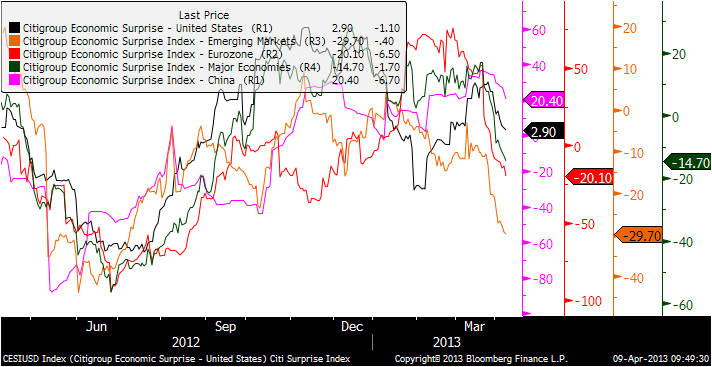 What is notable is that equities have diverged over the last 6 months, whilst relative weakness in commodities has been more in line with the trend in economic surprises. It suggests equities may be overdue a correction.

If we aggregate 10 year treasury yields, Euro-USD, the CCI Commodities and MSCI World Equities indices, then the collective trend changes over the last 12 months appear like this:

We see a notable downtrend in pro-risk since the start of February but with equities diverging. To be specific, it is the US and Japanese stock indices that have diverged, as we see corrections more clearly over the last couple of months in the Hang Seng, STI, Dax, FTSE. And a result of outperformance in US and Japanese stocks is more expensive valuations, with both now having p/es of around 17 (compared to the other country indices listed which are between 11 and 14 p/e). So are US and Japanese stocks due a period of underperformance, a belated correction? Or do the two biggest QE programmes in the world make for a difference that will endure until those policies are reigned in?

There is a potential topping pattern in the Dow Jones currently, as shown by the historical mirror below: 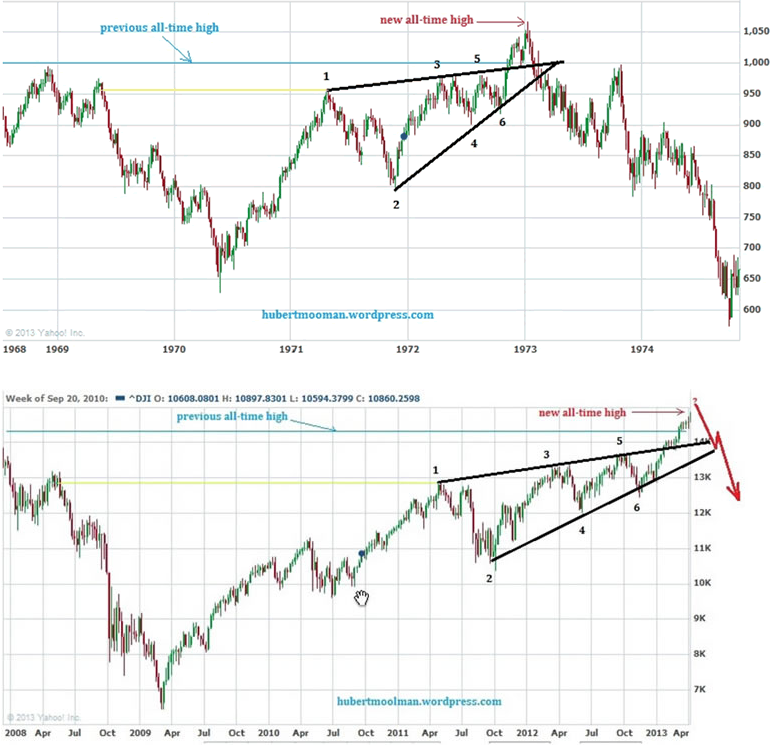 The overthrow out of the wedge could be reversed. Monday’s action – when gold toppled 10% – added to the likelihood of this topping pattern. However, yesterday we saw a partial retrace. The trend in economic surprises suggests they are overdue a proper pullback, however on the flip side the geomagnetism trend has resumed upwards. If I remove lunar phasing and show the short term geomagnetic trend only versus the SP500 it looks like this:

A correction has given way to a new uptrend which currently extends out to mid-May. This could imply that the pro-risk chart aggregate above is due a turn into a new uptrend, in line.

If equities were to make a proper pullback, then the question is whether commodities would outperform, as they historically tend to as late cyclicals. Below we see this occurring in both 2000 and 2008. 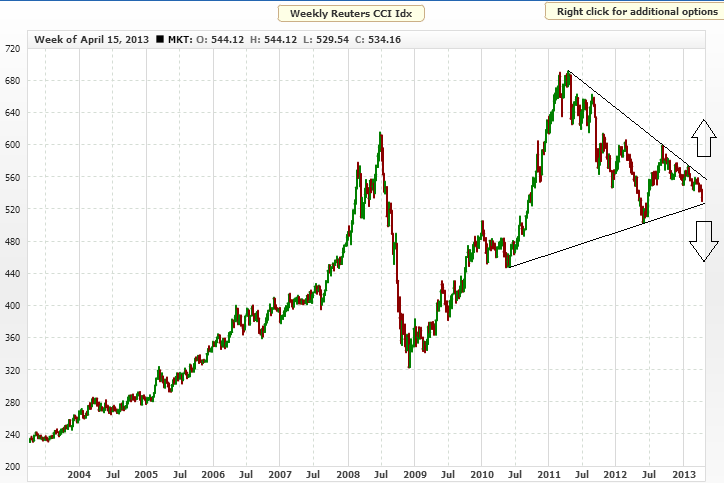 The breakdown in precious metals has pulled it to the support line, which makes the next move in commodities the key.

So imagine commodities made their secular peak in 2011 and the sharp breakdown in gold is to be followed by general steep commodity falls that take the CCI into a breakdown. Resource stocks would get hit hard, and we would see a pullback in equities accordingly. Equities would fall, commodities would fall harder, treasuries would be a likely beneficiary. However, I can’t square this scenario with the positive picture in leading indicators. Unless we see a rapid deterioration in the general picture of growth ahead then I see it as more likely that commodities will hold up, and at worse continue to build out the triangle sideways. To add to this, from my recent post on money velocity, we see a potential bottoming out in progress in money velocity and treasury yields, that I suggest could have begun in 2012. We similarly see a potential bottoming out  in UK gilt and Geman bund yields below, as of mid-2012:

If the wall of parked money begins to circulate a little in the economy, based on a more entrenched picture of growth, then we ought to see a pick up in pro-risk asset inflation and a pick up in price inflation. So I continue to watch leading indicators for evidence that growth is becoming entrenched or for evidence that we are cycling down into danger again, to be met by another central bank response. Right now the evidence is for the former, and so I have my doubts that the commodities secular bull is quite over. Below we see the secular bull progression in commodities since around 2000, in terms of relative expensiveness versus other assets: 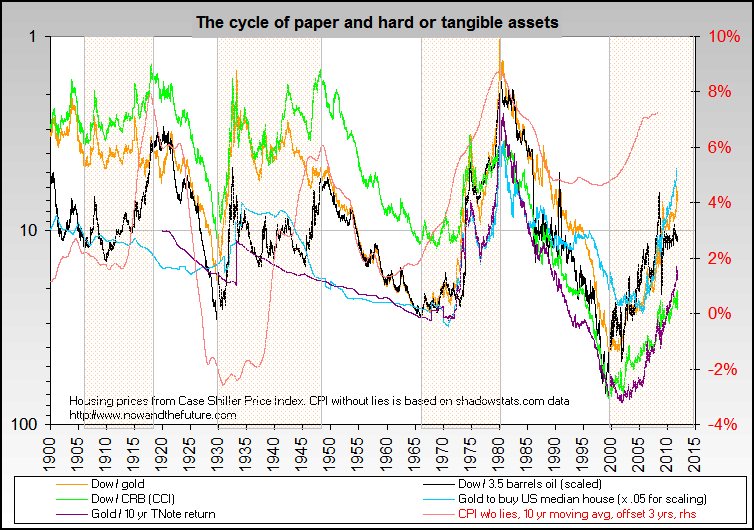 It is clear that there has been a large relative repricing of commodities in that period, but it is also clear by the various measures that we have not seen levels reached in the 10s, 40s or 70s. That said, we saw a much more extended repricing of equities into 2000. So my question would be: has the exponential rate of technological evolution brought about a change whereby we see future Dow-gold ratio tops and bottoms at ever higher levels (as human progress is captured in equities)? Or is this offset by increasing scarcity of commodities and increasing demand (more humans chasing fewer resources), which means the secular commodities bull still has work to be done to drag those ratios to normal historic levels?

Below we see the Dow-gold ratio and the author (not me) questions whether what we just saw in gold was the equivalent of a 1987 event for stocks, namely a crash that appeared to spell the end of the bull market in stocks and a breakout for gold, but was swiftly reversed.

If that is so, then we should see buyers step back in on precious metals and retake the breakdown level of 1550 in due course.

As things stand this is a correction that does not violate the secular bull market. UBS echo Chris Puplava’s view that the correction in gold will turn out the start of a new up phase:

And a reminder of real yields globally is still a positive environment for gold:

However, I maintain the picture for gold – and commodities – is very much in the balance. As you know I can write a broad-based case for commodities having peaked in 2011, aligned with a sunspot maximum in 2012, as well as a broad-based case for the secular commodities peak being ahead, in line with a sunspot maximum in late 2013. The breakdown in gold adds weight to the former. Piece by piece we will see the clear winner, and right now I look to see if buyers step in on gold to reveal a weak-hand shake-out whilst retaining its log support and whether commodities attract interest here to prevent a CCI breakdown. Sunspots have picked up, but not to new highs, and so it remains in the balance as to whether the solar maximum was in Feb 2012 or is ahead.

If gold did make its secular peak in 2011, then we could point to similar technical shaping at the end of the last secular bull:

Since that chart was produced, gold dropped to a low of 1320, which would be equivalent to around 350 in 1981. Looking at what happened next in the 1980s, gold was then not far off a bounce, which retraced half the falls before failing again.

In summary, I still think it remains in the balance as to whether the secular bull market in commodities and gold is still in play and has one final (biggest) leg up still to come. Since selling my stock indices longs, my positions consist of short treasuries, long multiple commodities, and long gold, silver and gold miners. I doubled up on these last three into the sharp falls. My exposure is significant, and it is going to get expensive if the secular bull market is over and more falls are ahead. However, if this was the last correction before a bull market finale, then those positions would conversely turn out highly profitable. It’s a risky business, but I am leaning towards staying put and watching developments for further clues, rather than lightening up.

50 thoughts on “State Of The Markets”