A potential low was formed overnight in precious metals. I suggest a snapback has good odds, as yesterday’s action produced yet more extreme oversold and overbearish flags, such as this: 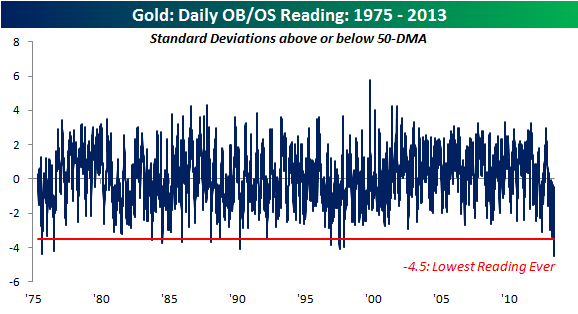 Daily Sentiment Index for gold and silver was down to 7 out of 100 at the start of the day, so I expect finished close to zero. Bullish percent for gold miners ended a second day at zero.

It’s akin to a stretched elastic band. Doesn’t mean it can’t go lower yet, but if so the relief rally would likely be bigger and faster. An obvious target for a relief rally would be the scene of the breakdown, which in gold would be around 1550. However, it would take a fairy powerful snapback to get us there and I doubt such a strong relief rally would occur if this is a new secular bear. So is it?

Many times I have documented reasons why gold is around the end of its secular bull: expensive value ratios versus stocks and real estate, solar cycle timings, bottoming out of real estate and (potentially) treasury yields, stock index p/es and p/bs having in various countries reached secular extreme lows. But this overall secular transition takes time and working out the timeline of developments is difficult.

We now see a potential bottoming in the stocks/gold ratio: 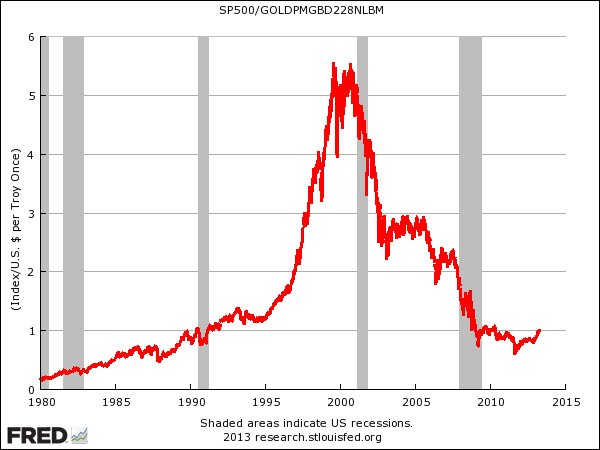 We also have the CCI equally weighted commodities index now at the bottom of its large triangle. Further falls in commodities here would ensure a break down and pass another piece of evidence to the secular-bull-already-peaked camp. I believe the action for the remainder of this week is going to be telling. Either buyers step in significantly in gold (central banks or large investment funds buy it up) and drag precious metals back up, to eventually reveal it was a last shake-out of weak hands before a parabolic finale – or – buying interest is weak and by the end of the week precious metals have tumbled further to levels whereby the secular bull cannot be recaptured any time soon. Ironically that would be a parabolic finale, only the wrong way up.

So no time to delay, in my opinion. If you were in gold, like me, prior to the falls, then you either attack for a snapback or defend and close out or sit aside and do nothing until the dust settles. I’m sure you already made your choice, but for me if this is a new secular bear then I don’t want positions stranded further up and nor do I want to take a loss. I attack on weakness and sell into strength, and that works for me. Interestingly, yesterday was the biggest one day traffic for my site since I launched it. I imagine many were scrambling for info and ideas as they were holding precious metals and surprised by the action.

If it turns out gold did make a secular peak in 2011, then it did not make a typical parabolic secular top, but silver did. Gold instead rather made a topping range from then until last week, which is the other typical market top, if internals or indicators negatively diverge. Perhaps there were such divergences in that ‘fear’ susbided over this period, as the Eurozone finally got to grips with its debt issues, the US dollar potentially bottomed out, inflation did not materialise as expected – all reasons for/against gold.

If it didn’t make its secular top yet, then can we find other reasons for it to now do so? Gold performs well in an evironment of negative real interest rates, so if rates and yields are maintained negigible but inflation picks up it could reassert itself. For inflation to pick up it needs commodities as a whole to recapture money flows, which could occur if growth can be maintained and money velocity picks up. Leading indicators currently suggest this could occur, but there is some demand-supply slack to overcome. Another support for gold is central bank balance sheets and money supply, which can dilute currency in relation to gold. Below we see global money supply growth correlating with gold’s performance:

And here we see recent growth in the money supply around the world. Only the US has weakened, but collectively the global trend is still up. It would take a reversal in policy to change this. Could such a policy change be about to happen? Potentially, if growth and jobs pick up and become more entrenched. However, right now, we are seeing doubling up in efforts in Japan, and no change elsewhere.

Central bank balance sheets show a similar apparent correlation with gold’s trend, and again, it would take a reversal in policies, an reduction in or end to QE to change the balance sheet trend. Once again, maybe gold’s decline is telegraphing this, but right now we are seeing more QE in Japan rather than less.

Of course it is not set in stone that gold should rise in line with balance sheets and money supply. Measured against other commodities, gold is overpriced and has advanced too far too fast. In short, there are multiple ways to value gold, and some argue for a (protracted) decline, some argue for further upside, but the bottom line is this. As things stand right now, gold is perceived as unattractive, because central bank policies have not (this far) brought about raging inflation, weak growth low rates and low fear is the general global situation, which persuades investors into stocks and real estate, particularly as both are historically cheap relative to gold, and there has been a build up in inventories in most commodities.  So it depends on what happens next, or what is perceived to happen next. Will commodities outperform as late cyclicals if stocks make a top here? Is there to be a solar max later this year which inspires speculation and inflation? Is money velocity about to pick up in a meaningful way as growth becomes entrenched, leading to inflationary froth? Or is growth to weaken again leading central banks to even greater stimulus, which inspires money into gold again? Or is moderate growth and low inflation to be the norm ahead, with central banks gradually easing off and a new K-spring already underway with momentum in stocks and real estate?

If gold still has unfinished business in any of these areas, then I suggest we should see swift repairs and solid buying interest, to reveal it was a last shake out of weak hands. If not we should see a weak response to the precious metals rout and the CCI commodities index breaking from its large triangle. An important few days.