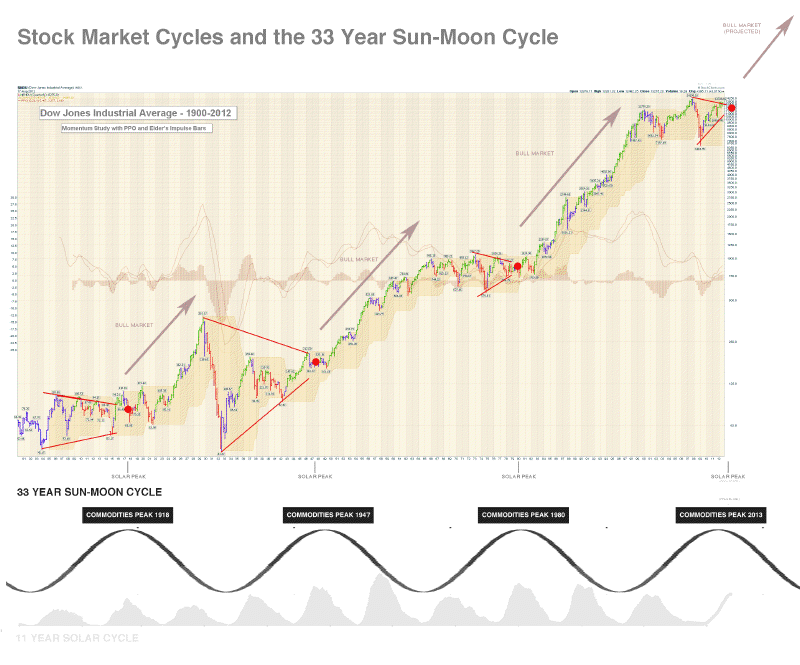 Firstly, from Robert Bowden, a long term chart of the Dow and the lunisolar 33-year cycle. Great work from Robert, I would just repeat my 1930s tweak, that the secular bear sideways range contraction would take place after 1937 rather than after 1929. Regardless, in each instance the market coiled into the solar peak in red and there was a great buying point for equities following.

The second chart was provided by Mike, and is from NowandFutures. This long term chart for commodities fits very well with the long term equities chart above, showing the inverse secular relationship between the two. Nowandfutures have identified a ~30 years cycle in commodity peaks and by including their Elliott Wave count we already peaked.

Bring together this chart with the above equities chart, and multiple charts from my Forecast 2013 series, the evidence is pretty compelling that we are at a secular inflection point, in the long term view. If I was a very long term investor, I could sell out of commodities and bonds and buy equities and not look again for 10 years, and only a new paradigm would prevent that from returning handsomely. As I have argued, I don’t believe we have a new paradigm at this point in human history. We have thus far seen typical secular development and indicators suggest we are in the area of what should be a typical secular inversion.

However, as a secular inversion is a messy affair over a window of a few years, and I am a medium term trader whose main focus is to make a strong return each calendar year, getting the timing of when to enter and exit which asset class is crucial. So, my arguments for a commodities peak ahead next year, rather than already achieved in 2011, can be summarised like this:

1. Solar cycles are the underlying. The ~30 year cycle NowandFutures have identified is in fact 3 solar cycles or one lunisolar cycle. Maximum human excitability occurs around solar maximums which is revealed in my own charts by secular stocks peaks and secular commodities peaks all occurring close to solar maximums, as well as inflation peaks i.e. peak speculation and buying. The solar maximum ahead next year therefore suggests 2013 for a commodities peak rather than 2011.

2. Previous secular commodities peaks have all occurred with a subsequent shadow peak, or bounce, around 3 years later (as the demand-supply balance is not transformed overnight). 1980s secular peak, 1983 bounce (all lower highs). 1947 secular peak, 1950 bounce (just oil made a higher high). 1917 secular peak, 1920 bounce (just oil made a higher high). In each case, when the economy gained some momentum after the secular peak, commodities joined in the pro-risk party for a last push, but by that point, the best investment was equities, which were already in new secular bull momentum. Exrapolating, we should see a secular commodities peak in 2013, and a shadow bounce around 2016.

3. Secular asset peaks normally end with a parabolic mania, a blow-off top. In this K-winter since 2000, the leading asset has been gold, and gold has yet to make such a parabolic. Furthermore, the technical shaping of gold suggests that it has just broken upwards out of a 9-month coiling from 2011 to 2012, which should power it to new highs. Could it do so alone, without other commodities? It’s not impossible, but as I showed in my forecast series, there is feedback looping between commodities and normally close correlations in performance. Commodities:stocks and commodities:bonds ratios are supportive for a final mania in oil and gold, and Goldmans have just upped their forecast for commodities for the next 12 months for an 18% collective rise.

5. I’m not a big fan of Elliott Waves because a variety of interpretations can be applied to any chart under consideration. Of all the market disciplines (and I have been open to all) I find them one of the least predictive. However, I generally subscribe to the idea that markets move in waves and that there is some logic to a 5-wave or 3-wave count. I can see a 5-wave count on the CCI commodities index since 2000. I think the 1970s 5-wave count above is less compelling and more of a retrofit. In short, I accept the 5 waves since 2000 to 2011 is a warning, but it would not be alien for commodities to make a new high next year and an alternative count applied. It comes down to weightings. I give more weighting to solar cycles, gold technicals, asset ratios, real interest rate trends, food price inflation, central bank reflationary actions and so on, than to Elliott Wave counts.

In summary, more evidence in the above charts that we are at a secular inversion point in history. I believe the Nowandfutures chart needs a little tweaking to make accurate, and as it is a long term chart, that tweaking makes all the difference, namely from 2011 to 2013 for a commodities peak. A prudent investor might choose to sit out what is a messy, tricky period to time in terms of which assets when. However, if there is a commodities parabolic ahead, that is a great opportunity for a trader, and I believe there is. Drawing together multiple disciplines, I believe the probability lies with the peak ahead. If I am wrong, then nearer term clues will start to appear in favour of the alternative, and my approach as always is to keep analysing day by day to see if this is so. In recent months however, the nearer term clues have grown more in favour of a peak ahead, than in the past, thanks to renewed QE and Chinese infrastructure programmes, grains making new highs feeding into food price inflation ahead, bullish technicals in precious metals, renewed US dollar weakness, and improving leading indicators.