…for US equities? As we stand, the SP100 already made new highs. Apple has since broken upwards to new highs. The Nasdaq, Dow and SP500 are all back at their March 2012 highs (the SP500 including dividends is now at an all time high). Either it’s time to get out of all US stock indices longs, or the melt up is just about to begin. In stark contrast to the US stock indices predicament, the Chinese stock index is at 3-4 year lows. 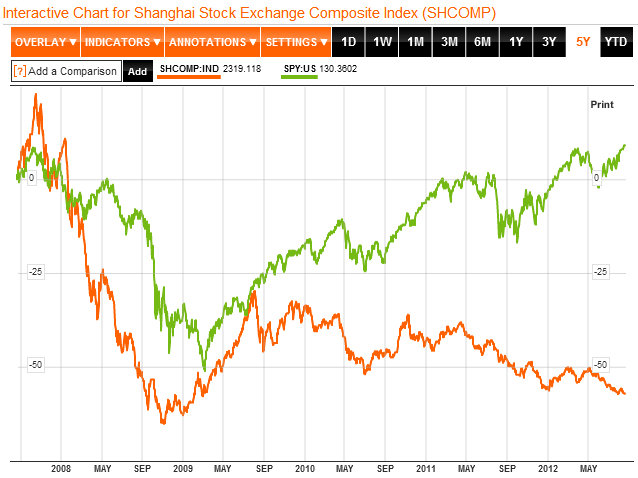 Supportive of US equities breaking upwards from their March highs, we have (i) global and US economic surprises still in an uptrend, (ii) Spanish and Italian CDSs still in a downtrend, (iii) money exiting US treasuries as 10 year yields have risen from 1.4 to 1.8 in just 3 weeks, and (iv) ECRI US leading indicators trending upwards, almost back to positive:

Turning to global leading indicators, this last week’s data from the Conference Board delivered positive readings looking forward for USA and Spain, but badly negative readings for Japan and Korea. So it is unlikely that US and European equity advances are based solely on hope for QE in those two regions. This East-West divergence is likely to be resolved one way or the other: Asia and emerging economies turn up, or US and European equities top out. So which is it to be?

I deliberated on Friday at the new moon about whether to take some profits, but decided against. Geomagnetism is currently tame and it means the lunar-geomagnetic model currently has a mild uptrend into mid-September (all models upated this morning). Furthermore, the occasions historically when lunar phasing tends to fail in trading  are usually when there is a strong up or down trend. Clearly lunar phasing is not the only influence on trader sentiment, so in times of strong momentum one way or the other lunar phasing may be overridden. The current crawling up the upper bollinger band on US indices is reminiscent of the strong uptrends of the last two years that followed mid year consolidations. So I am suggesting there is a chance we are in a similar sweet spot for stocks.

What if global leading indicators didn’t turn up? Is it possible we could still see my forecast come good of an overthrow peak in equities in late 2012 and then a secular peak in commodities in 2013? Something like in 2007-8 where stocks first outperformed and then peaked whilst commodities took over and peaked longer and higher?:

Well, looking back to the last secular commodities peak of 1980, both stocks and commodities did make such moves even though leading indicators had been trending downwards for some months. In other words, speculation drove them on despite the worsening fundamentals, and this fits with my theory that increasing sunspots into the solar peak brings about speculative climaxes in risk taking and buying.

Getting technical again, US stock indices do not yet show overbought or overbullish readings. Were they to reach those levels, I would be much keener to offload some longs and take profits. The Euro is also showing signs of solidifying its base above 1.2 versus the US dollar. Gold is similarly building up its base and as can be seen below could be close to a break out of horizontal resistance, having successfully broken and backtested falling resistance.

In summary, at the moment the general overall picture is supportive of my forecast and my long pro-risk positions. Whilst there remain issues and areas of doubt – as there always are – I feel comfortable sticking with my trades as they are for now and continuing to watch indicators and data for further developments. We are at another siginificant point however, in whether US stock indices (and gold) can breakout or are sold back. Whilst a failure (in both) would be a set back for the bulls, it may mean more time is required, rather than it isn’t going to happen. But for equities bears this is the last stand and if this is to be a major double top then we should look for overbought and overbullish readings coming to pass as well as increased negative divergences supporting the exiting of longs.