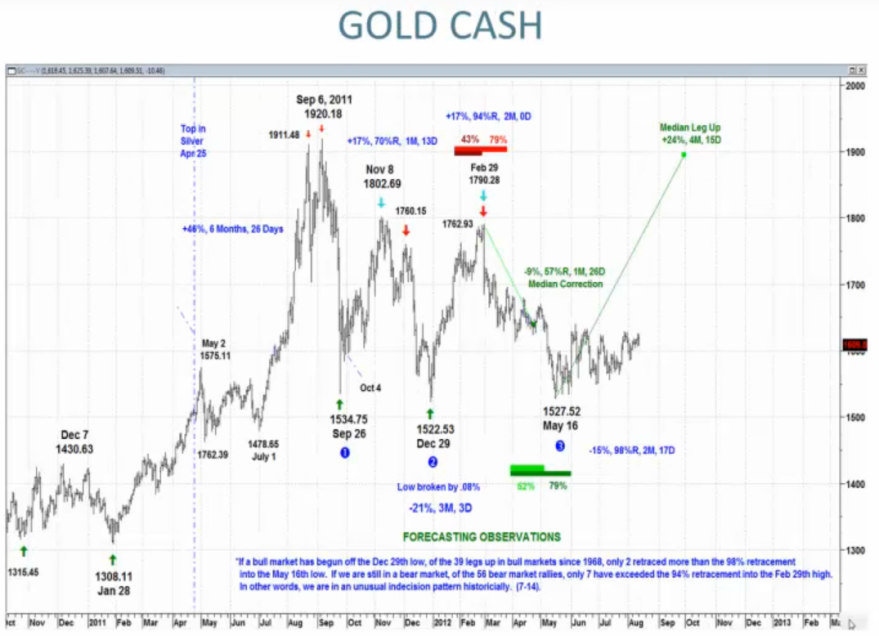 These are Gann Global’s projections using Gann methodology (mirrors in time, historical rhymes). Stocks to melt up into October 2012: 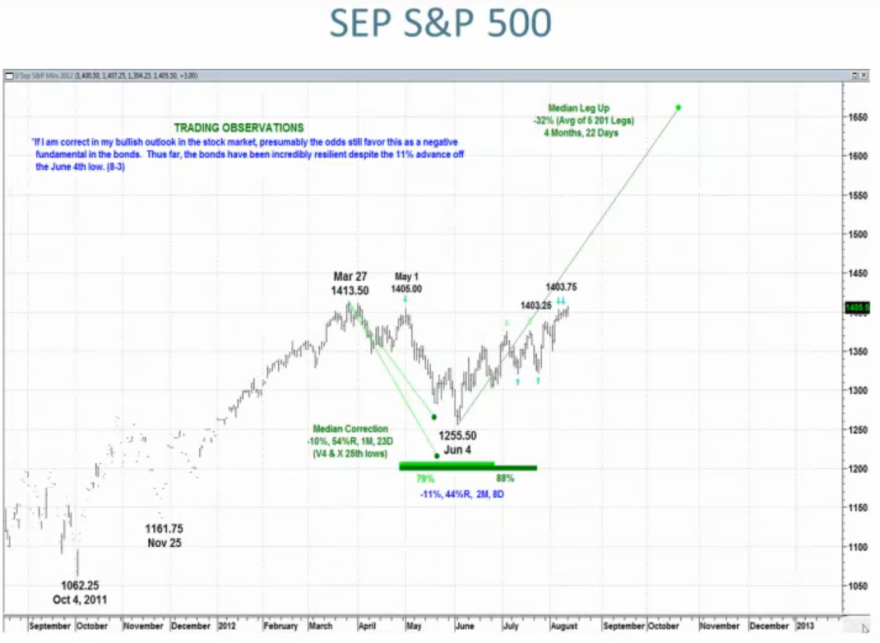 Commodities to make a parabolic move to new highs into late 2013:

Gold to climb back to its previous highs by this September / October:

They also forecast that grains will now make a consolidation and retreat a little before advancing again to new highs, plus that treasuries have begun a new sustaining declining trend. This week’s action in treasuries and yields has the hallmarks of a significant trend change, but let’s not forget the Fed continue to tinker with this market.

In short, Gann Global are largely in agreement with my own predictions, and the other analysts that I read and respect are generally also more with than against. Marc Faber predicts that stocks may run up here to 1450-1500 before turning in the Fall/Autumn. Chris Ciovacco believes stocks are technically bullish and highlights the risk of a melt up. The Puplava brothers at PFS point to the rotation into pro-risk sectors, the lack of recession evidence, the intermediate term indicators for precious metals and the pick up in economic surprises as supportive for another pro-risk rally. Scott Grannis suggests the divergence between stocks and treasury yields is now being resolved in favour of stocks, and that the key risk is that we see better economic outcomes ahead than priced into treasuries. Tiho’s continued bearishness aside, I largely have those that I respect in tune with my own forecasts, and clearly I don’t consider that a contrarian alignment.

There are several crunch points in the remainder of August which will help determine overall momentum pro-risk or pro-safety. The resolution of the large multi-month triangle on gold. ECB intervention and/or Fed announcement of action at the Jackson Hole meeting 31 August. Whether the Euro can base here above 1.20, and by association pull the US dollar back. Whether leading indicators can pick up and fill in the missing macro support for pro-risk, and in particular whether China can either pick up or deliver stimulus, reflected in the key resistance tests shown below for Hong Kong and China stocks.

In the very short term I remain as per my last post – holding my positions until the end of this week, into the new moon. At the time of writing stocks have made little movement since my last post. Chris Puplava highlights today’s Philly Fed news as a likely mover, expected to the upside. Rob Hanna’s study suggests that these last few days of tight range historically resolve to the upside. I personally believe that with the Nasdaq, Apple, SP500 and Dow all within touching distance of their previous 2012 highs, they will go tag those highs. If that were to occur, then we would be looking at the bears’ last stand. However, there is a weekly Demark sell signal on the SP500 and with lunar down pressure erupting as of next week, I am open to the possibility that stocks may consolidate before attacking those highs. But let’s see the action today and tomorrow. As before, I will notify if I take some profits.

In a nutshell, I have significant long positions in precious metals, energy and agricultural commodities, as well as global stock indices. I have a smaller position in short treasuries. I expect to peel out of stock indices first, expecting them to top in late 2012 / the turn of 2013, and then to peel out of commodities into a parabolic finale into mid 2013. I expect to hold short treasuries for the longer term.

Precious metals are the key laggard in my account currently, but I expect them to eventually become the best performer, looking out into 2013.

Natural Gas was for a long time the dog of the account, and my aggregate position is still under water, but in 2012, having exhausted buyer interest, it finally turned as it reached historic extreme cheapness versus oil and the stocks of gas started to come back towards historical averages (second chart below):

Crude oil inventories have also begun to move back towards the historical average range and together with the shortage in emergency supplies this has given oil a rewnewed thrust in recent sessions: 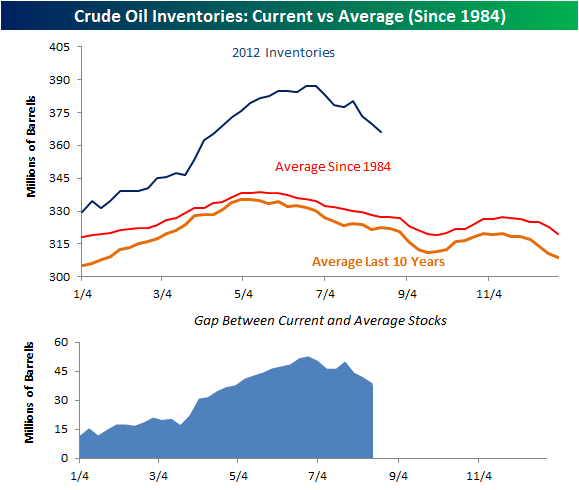