Yesterday was an up day for bonds, commodities, gold/miners, and equities, i.e. both pro-risk and anti-risk. Confused?

Retail sales came in weak, not just for last month, but for the revised previous month too. The string of poor economic data, in line with leading indicator forecasts of growth having peaked out, has resulted in progressive revisions to Q4 2013 GDP estimates – here is Barclays: 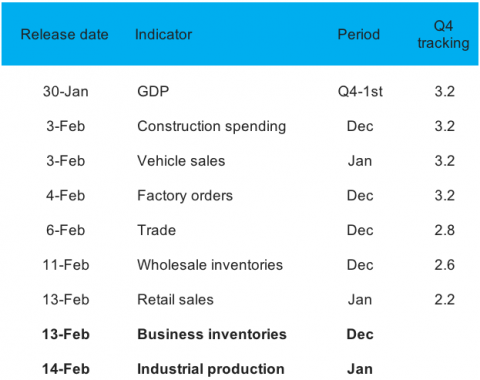 The latest picture for the Q4 earnings season shows blended revenue growth at just 0.8%, and of those companies who have given forward guidance for Q1 2014, 80% have given negative rather than positive guidance.

Last year’s multiple-expansion rally in equities was justified on the stock market front-running a return to ‘normal’ economic growth and earnings growth, as well as the underpinning of ‘Fed policy trumps all’. With QE now being wound down, economic data worsening rather than improving, and earnings still disappointing both in terms of revenues and forward guidance, the case for anti-risk is strengthening, and the rally in stocks suspect.

Yesterday ahead of US stock market open, futures were down and equities around the world were struggling to attract buyers, then the retail sales data hit and the scene was set for a bearish US session. But the opposite occurred: a ‘stick save’ as short stops were run and bulls delivered a trend day up. We saw this occurring in January:

Eventually this gave way to the high volume decline days.

Yesterday’s volume was again weak, relative to the declines leading into the 6 day rally: 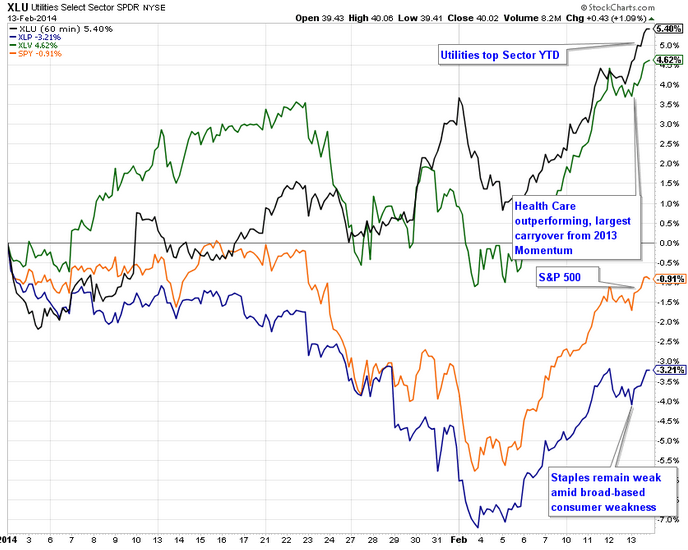 From a bullish perspective, small caps outperformed yesterday and advance-declines continue to be strong: 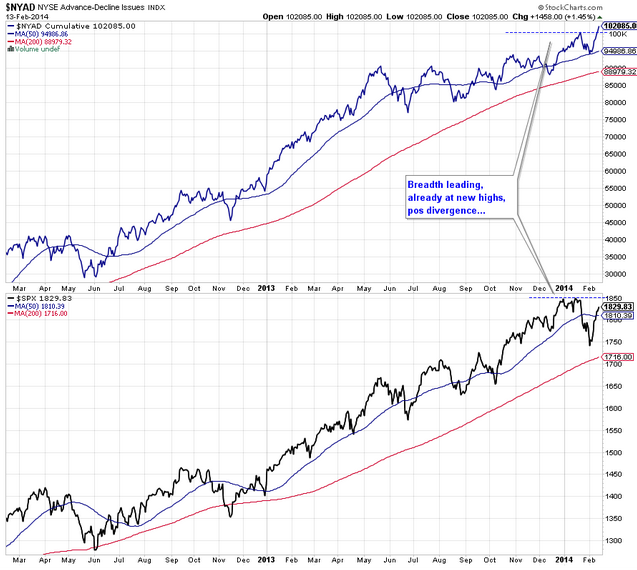 Today is the full moon, which could spell an inversion in equities. The Nasdaq 100 joined the Nasdaq Composite yesterday in making marginal new highs, but it did so on a divergence in breadth (as measured by % above 200MA). So I now watch to see whether the other US indices follow suit or all roll over from here. If the latter, then it could turn out to be the sweet spot of the top of the ‘second chance’, namely the optimal time to short, but if the former, it would open up the prospect of a longer topping process in equities. That makes it a fairly delicate position. If you have been reading my recent posts, then I have a multi-angled case for equities to roll over from here, and the developments behind the price action (volume, defensive asset flows, economic data, etc) have strengthened that case rather than weakening it. So I continue to gradually add shorts into this rally and rebuild towards my intended ‘full’ short position, until the ‘clues’ change.

The case for commodities making a late cyclical charge now looks more compelling, with new broad momentum in the class, and siginificant breakouts. Commodities typically top out after equities and once the economy has begun to weaken, sucking the remaining life out of it. On the chart below we can see the last two such occurrences. In 2007 commodities broke out of their consolidation and into a steep rally as equities topped, and I expect similar developments this time. We have been seeing the US dollar weaken on the down days for equities, which should accelerate commodities as equities fall.