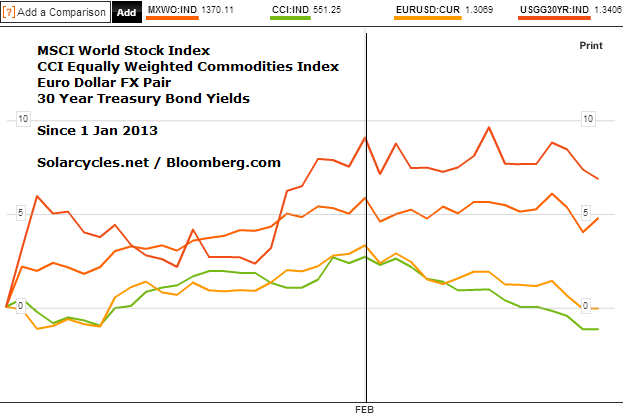 …I will be in a motorhome, touring NZ North Island, so internet access is going to be occasional and fleeting. So an update and roundup on the markets below, and I will post in the comments beneath it anything important in that period. After New Zealand it’s Abu Dhabi for a week, the last stop on the trip, before returning to Europe.

Let’s start with gold. Major extreme readings were reached last week in oversold and overbearish measures, in both gold and gold miners, many more extreme than in the 2008 sharp falls. I won’t reproduce them here, as many blogs and sites have shown them, but it was sufficiently extreme for me to add to both gold and miners last week as declared. Gold has since rallied away from those extremes and therefore in price, and whilst I don’t know how it will shape technically from here, the key question is whether its secular bull is over and ended in 2011 with silver’s parabolic rise and fall. So here is gold since the start of its secular bull in 2000, measured in all the major currencies. It should be clear that gold has tracked sideways since 2011 and has consolidated up high, whichever currency it is measured in. 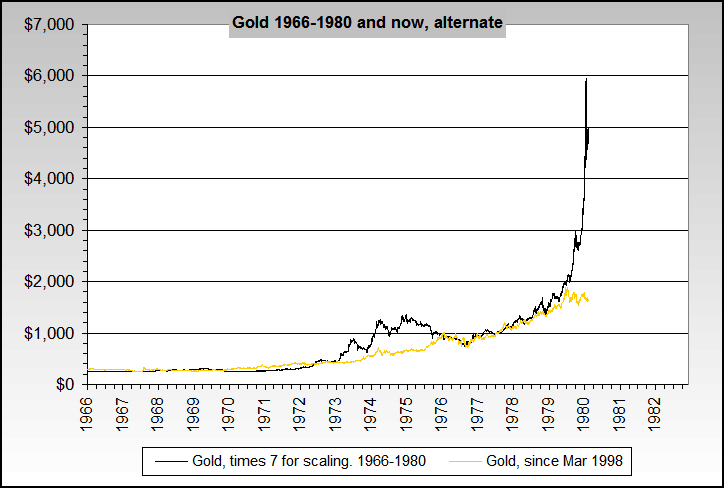 I am not suggesting that gold has to shoot as high as the comparison suggests – only rather that some kind of excessive exuberance would be a normal end. So, the lack of parabolic ending move in gold yet, together with the high sideways consolidation when the whole secular bull from 2000 is viewed, give me a couple of reasons why I believe we have been seeing a final washout of weak hands before gold breaks higher. However, I await supporting evidence such as from sunspots breaking higher (to confirm the solar peak is ahead), commodities starting to outperform equities, and inflation picking up. This is how sunspots look:

There is a mess, rather than a trend. If the solar peak is ahead this year, which remains the most common forecast, then we need to see daily sunspots register over 200 to make the uptrend clearer. So I am looking out for that.

Since my last post on the markets it has become clearer that pro-risk did begin a correction at the turn of January into February. The chart below combines proxies for stocks, commodities, risk-safehaven FX and treasury bond yields.

I suggest there are two paths forward, both of which eventually will see equities return to their highs, in order to deliver a negative divergence top (price advances but internals weaken). The first is the five-models-in-alignment path, which suggests pro-risk may pull back into March before advancing again. The second is that pro-risk is only making a normal lunar pullback, into yesterday’s full moon, and will continue upwards over the next few weeks, for a Spring swing top. This option is supported by cyclicals as a leading indicator, and my geomagnetism model shown:

The tail on the model stretches out into the end of March and remains in an uptrend due to unseasonally tame geomagnetism (actual and forecast). The oscillations within that are the lunar phase pressures.

There also remains a fairly benign macro-economic environment, which should support pro-risk, although we should always be alert for early warning signs of a change, and we could potentially have this in the latest PMIs.

China PMI, US PMI and Europe PMI in order below:

A droop in the latest data, but still positive in China and the US.

Meanwhile, economic surprises show unclear developments in both Europe and the US, but using oil prices as a leading indicator for the latter, a topping out in this measure may occur in Spring.

US earnings season is pretty much over, and the final results in both earnings and revenues were good, and supportive for equities.

The latest Conference Board leading indicator data table looks like this: 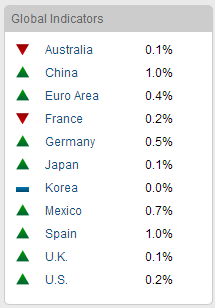 Since my last market post, readings for China, Germany, US and Mexico all came in positive. The table is healthy, for now.

In summary, the picture between leading indicators and economic/earnings data is fairly supportive for pro-risk for now, unless that droop in PMI readings becomes wider weakness ahead.

There is bearish sentiment towards sugar, coffee, wheat, corn and cattle currently, as well as the precious metals, and I would add to commodity positions if we saw improved evidence of a secular commodities peak ahead, namely those developments listed above. Until that becomes clearer however, I am playing it safe and sticking largely with what I have, as both the primary (secular commodities and solar peak ahead) and alternative (secular and solar peak passed) scenarios remain in play.