The breakout in equities is likely to become a fake-out or short final up leg, based on historical indicator patterns. Breadth and strength have negatively diverged:

Volatility relativity also suggests a correction or consolidation should now come to pass:

‘Smart money’ bearishness is off the scale: 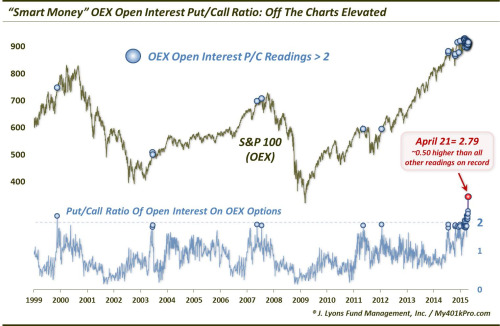 Blended earnings for Q1 are so far better than expected: -2.8% versus -4.6%, but of course still shrinking. Blended revenues are worst than expected -3.5% versus -2.6%. ECRI leading indicators have improved but are still negative.

On the bullish side, leverage has been on the increase again.

And real narrow money indicators point to economic improvement ahead.

There are two scenarios currently in my mind. My first and highest probability scenario is as per the first several charts above plus all the charts in my last post, namely that stocks are right at the end of a major topping process, and under the hood they already topped. That means last week’s apparent price breakout will quickly fail. I have smallish short Dow and long gold positions aligned to this, looking to build on reversal and momentum.

My secondary or outsider scenario is that US stocks have yet to join Chinese and German stock indices in a parabolic blow off ending pattern, fuelled by potential improvement in economic fortunes/prospects into summer-end. This would be similar to the lag of the Sep 1929 stocks max versus April 1928 solar max, a kind of maximum outsider in the historic range. Should this appear to be occurring I would step aside and continue to try to identify the top.

Ultimately, as things stand right now, I consider all the key supports for the bull have been removed. Earnings, economic data, smart money, allocations, sentiment, valuations, solar max, geomagnetism. We are left with dumb money on leverage, plus expectations that both the economy and earnings will recover in the remainder of 2015. We might consider the latter is key: whether data does improve again – and maybe it is. However, recall the evidence shows that the stock market leads the economy rather than the other way round. The wealth effect of the stock market. The question then is what will cause participants to pull the plug on equities? We are now in a phase of ultra-complacency where most traders can see nothing that would cause that to happen. Yet that ultra-complacency makes us at highest risk of the collapse.

A final chart: the collection of countries now paying negative returns on government bonds. Swiss 10-year bonds are amazingly now paying a guaranteed negative return. It should be clear that when money is being invested in a bond paying an assured loss for several years then it is because deflation, recession and relatively larger losses in other asset classes are expected. Either that, or investors are making a foolish mistake. So who has it right, stocks or bonds? Smart money flows, valuations, allocations and sentiment all continue to show the bubble is in stocks, not bonds. Bonds and commodities are accurately reflecting the harsh reality of current global demographics, trade, and economics, whilst equities have become a ponzi scheme divorced from fundamentals.

576 thoughts on “Short Term US Update”