Here is a chart from Barry Bannister showing the impact of previous sharp moves higher in oil prices:

He suggests it is not the real oil price level per se but a ‘shock’ i.e. a big, fast move up in price that brings about a collapse in GDP.

Here is the nominal view of crude: 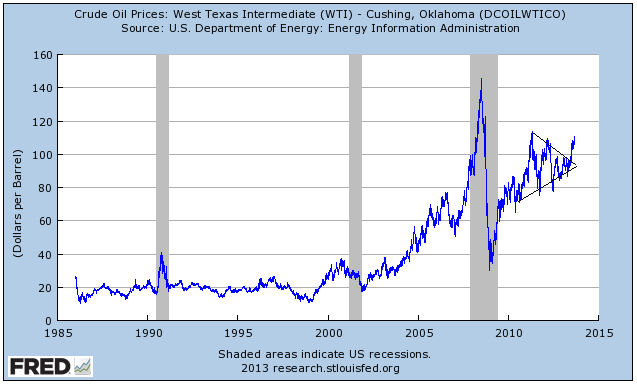 From a technical perspective, the potential for such a swift rise is there, as crude has broken out of its triangular consolidation to the upside. A break above the 2011 high of $115, which is within reach, could be enough to produce the speculative spiral that has been behind previous parabolic rises.

Zooming in on the nearer term, a fairly messy range has developed over the last six weeks, with the contract buffeted about over Syria. With inventories still above historical averages it could be interpreted that there is a lack of appetite to buy higher than this range, and clearly there is a risk that this stalling in momentum gives way to a breakdown. 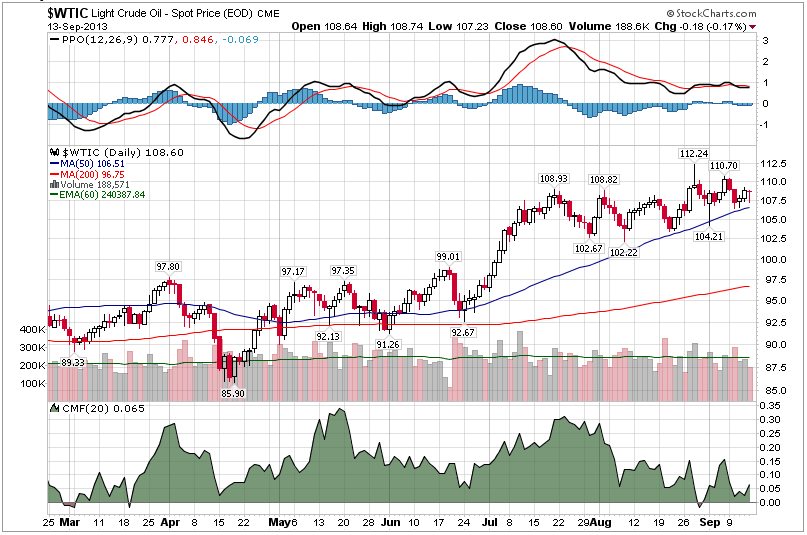 However, for now, the price continues to edge upwards and a bullish intraday reversal candle formed on Friday. So let’s see what happens this week.

What if exponential technological evolution more than offsets negative demographics? I.e. what if rising corporate profits thanks to technology-driven gains can spur the stock market higher, maybe exponentially higher?

Here are US corporate profits, which seem to suggest that could be happening:

Now take a look at wages as a percentage of US GDP: 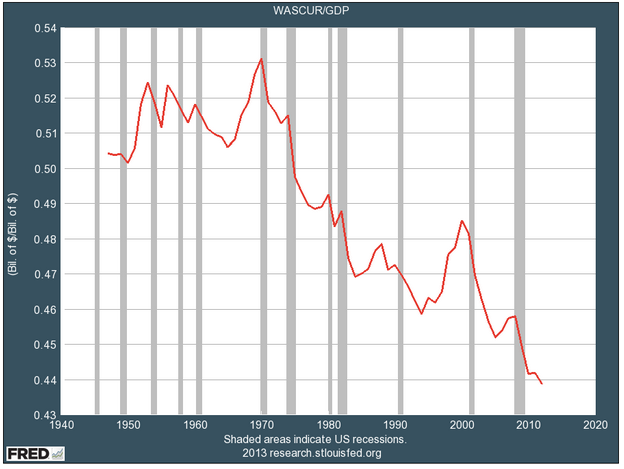 The employment to population ratio has also fallen sharply. Companies are making more profits but employing less people and paying them less. Technology is one key factor in this: it is cheaper and more efficient for companies to increasingly employ tech over people. As we are concerned with the stock market, are the corporate profits what matter? Well, more unemployment and lower incomes means lower demand in the economy. Hence we have seen a consistent theme in recent earnings seasons of revenues disappointing versus earnings: companies not making profits through demand but through cost savings.

But now take a look at what has been to a large part responsible for the recent rises in corporate profits to all-time highs:

It is the government defecit. Government ‘spending’ (stimulus programmes, cutting overnight lending rate to banks to zero, etc) has been the major factor since the 2008 crisis in pushing up corporate profits. Those corporate profits are real, but at the expense of increasing public debt. So the US government wants to cut back QE when it can, and facing the debt ceiling again – another ‘fiscal cliff’ – it needs to cut back spending and make savings. It also wants to keep rates low, ideally lower than inflation, to reduce debt servicing and shrink the debt, so current rising yields are a threat. Extracing from that Richard Koo PDF again, Japan only fell into deflation once it had fallen off the fiscal cliff, following an attempted fiscal consolidation.

Additionally, drawing together several pieces of research, it turns out corporate profit levels are only important in stock market returns over long timescales, e.g. a 10 year view. Sentiment is the main market driver in any one year, and p/es are the main driver if trading say on a 2-3 year timescale. By my work p/es are relative to demographics. A p/e of 20 is not expensive if the demographic trends are strong and positive, and vice versa.

So, I can now come back to the opening question of whether tech evolution can push up corporate profits and in turn the stock market, and offset weak demographics. Tech can enable cost-cutting but this can be at the expense of people, resulting in lower demand in the economy, so it’s not just a simple win, it cuts both ways. Furthermore, recent record high corporate profits are shown to be mainly due to a transfer of wealth (debt) from the Government, and the risk to future earnings is in Government action to cut back QE and savings to deal with the debt ceiling. But ultimately, corporate profits don’t matter so much for the stock market, only in long term investing. Sentiment can push the market one way or the other ‘irrationally’ before p/es and demographics come into play, before corporate profits.

In summary, I am still of the opinion that we do not have a new ‘secular’ bull market in stocks underway and that once ‘sentiment’ gives way, the collective demographic downdraft will help topple the economy and stock market. Action on QE and in response to the debt ceiling could be a catalyst for future corporate profit disappointment, which could help tip the sentiment. Crude oil, meanwhile, could do the job all on its own, if ‘some development’ provides the impetus for a speculation move into the commodity. Exponential technological evolution is a real phenomenon and I believe is ‘the great hope’ for humans to deal with the debt, resource scarcity, global wierding, demographics, overpopulation and other challenges. But I don’t see evidence that it can drive the stock market ever higher versus these phenomena in the shorter term.