The Dax broke above its recent range yesterday, and the FTSE is flirting with its all time highs. The US indices are further advanced, having already made and held overthrows earlier in the year, and whilst the SP500 and Dow could still feasibly be carving out a topping range, the Nasdaq 100 shows no signs:

Indeed, recent strength in tech has cast doubt on the transfer from early to late cyclicals, which is one topping process sign normally: 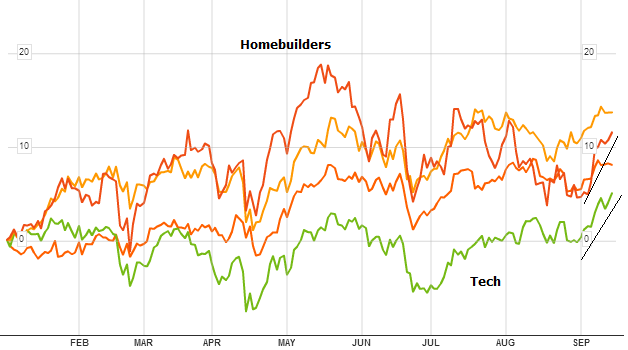 Homebuilders, another early cyclical, have also pulled up sharply. The other two shown are materials and energy sectors, late cyclicals, which over the last week have underperformed relatively. This casts some doubt on the topping process.

Recall we saw some topping signs present, and some absent. One topping signal was breadth not making a new high in August with the SP500, as shown: 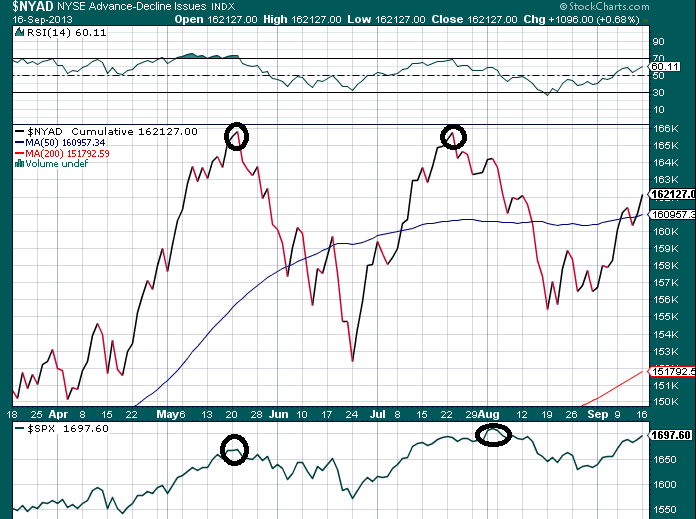 Now if breadth rebounds and takes out that double top it would negate this, and I’m wondering whether that’s what may now occur. Following the FOMC output tomorrow, we have 2 weeks of positive lunar pressure with a positive geomagnetism forecast to accompany. As per my speculation, I wonder whether taper-light with supportive wording will be the catalyst for a breakout in global indices and a 2 week rally, pushing any topping process further out in time.

It’s a difficult call because, to be clear, there are indeed some warning signs. If European and Asian stocks are turned down away from those major resistance levels, and the SP500 and Dow turn back down into their ranges, then technically a topping process will look more compelling. Margin debt is frothy, put/call ratios are frothy, certain indicators of Martin Pring are on the edge.

But, new highs – new lows do not signal a top at this stage. We don’t as yet see excessive rises in oil or bond yields. Leading indicators continue to point to broad sufficient strength into year end. Economic surprises for emerging markets have turned positive. In short, I am wondering whether a topping process in equities is going to be postponed for now, and we see another breakout rally first. If we see degradation in leading indicators, sharp rallies in oil or bond yields, or the US pulling back too sharply on QE and government spending (debt ceiling) then I would feel more confident predicting a top. For now things look too benign. Of course the Fed could surprise us tomorrow with an aggressive taper programme, but the continued relative historic weakness in the economy does not support it.

I side with the historic norm and predict rallies in oil (inflation) and bond yields will tip the economy and equity markets over in due course, but at the moment neither are threatening enough. If that scenario doesn’t occur then I predict demographics will tip the economy and asset markets into deflation, with the help of the Fed pulling back on QE/spending. So, the former would be an inflationary tipping into recession, the latter a deflationary turnover. For now though, whilst there are warning flags, we don’t appear to be sufficiently down either path to tip equity markets over. Your thoughts?