If the combined demographics of the major nations are exerting an overall deflationary pull on the global economy, then we ought to see clues in the data. Broadly-speaking, USA demographics began a downtrend around 2000, Europe around 2005 and China around 2010. Therefore, the biggest pull has been in place since 2010 or so.

G7 and E7 countries combined industrial output has been weakening over this period. The question is whether this measure is going to continue downwards and break beneath zero or pull upwards again from here:

Retail sales in some of the key advanced economies have also shown a declining trend over this period, and are also at the point whereby they either pull up or drop into the negative:

The global PMI composite for services and manufacturing shows something similar: a weakening trend over the last several years and the same predicament going forward:

Combined leading indicators for the OECD nations have also shown weakness the last couple of years but are trying to pull up again: 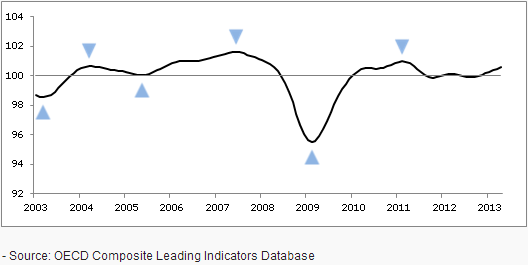 Furthermore, we have seen a renewed round of easing recently, with rate cuts across the globe in the last couple of months, as shown below, which should have a positive effect several months hence:

Lastly a look at specific USA data on its own does appear to show trends being pulled down over time:

Now let me outline two scenarios going forward. The first is that the world economy picks up in the second half of 2013. Positive effects from the round of further rate cuts, plus the drop in input prices through recent softer commodities push most of the above indicators upwards and away from danger. Demographics continue to exert their influence in keeping global growth weak and unimpressive, but growth is nonetheless maintained and improves, at least temporarily. Asset markets would be the primary beneficiary, with stocks most likely winners again, under low growth low rates. Commodities should also get a boost, in a mean reversion away from oversold and overbearish, and on improved global demand. If commodities then gained too much traction, the risk would be of oil and other key inputs tipping the world into recession given global growth is fragile due to demographics.

The second scenario is that the combined demographic trends of USA, China and Europe, that are now collectively at their most potent, drag those indicators above negative and the world economy tips into recession under deflationary momentum. So no spike in commodities, no excessive inflation or subsequent tightening, but rather like a global version of Japan in the 1990s, whereby no central bank action could prevent the demographic waves from cutting spending and investing. Such a deflationary shock is the scenario Russell Napier is predicting. QE has failed to produce either strong or self-sustaining growth, and growth in emerging market reserves has reversed, limiting their ability to deal with another deflationary shock. Inflation is the only real solution for the indebted developed country governments, to inflate the debt away, yet they cannot induce the necessary inflation, due to the combined demographic downtrends. If the world was to tip into a deflationary recession, then I expect a panic would ensue and stocks would sell off hard. The perception would be that despite the billions spent on propping up the economy, it had all failed and central banks were powerless. The massive debt that had been racked up in trying to stimulate and support was also now growing even bigger under deflation – a double failure. Of course, demographics would be the culprit, and eventually by around 2020 the trends would have improved in USA and China and others sufficiently to give the global economy traction again, but not before a massive sell-off in assets.

Stocks look to be rising again since the new lunar positive period, so I am hopeful my preferred scenario of a re-test of the highs will ensue. If this is a topping process in equities then we may then see the historically normal switch to outperformance in commodities. Certain indicators, such as Martin Pring’s, suggest commodities are about to gain traction again, and given they have been oversold and overbearish for some time now, a mean reversion would make sense. If commodities were to truly rally and then top out after stocks in the normal sequence, the whole momentum move for commodities would have to happen fairly quickly. This could happen through solar maximum inspired speculation, but until and unless commodities become the money target then this scenario remains theory for now.

If commodities do not take off, but rather leading indicators weaken and provide a negative divergence to the equities high retest, then the deflationary scenario could be unfolding. I would expect bonds and cash to be beneficiaries to some degree, whilst equities fall hard, and I believe gold would rally again, as the anti-demographic go-to. Once again I could see a solar maximum inspired speculative peak, this time in gold.

I have to end on the scenario not mentioned. Central banks continue to tease enough growth in the economy to keep stocks in favour. Not too much to inspire inflation and commodities momentum. Not too little to slip into deflation. Sustained weak growth in the economy and sustained easy money conditions, with the latter inspiring continued flows into equities, and perhaps a solar maximum inspired speculative peak happens in stocks. Under this scenario I would expect Japanese equities to outperform, under their belated demographic catch up, full-on central bank push, and as an energy importer benefiting from the subdued commodity prices. If this scenario were to be the theme of H2 2013 then I would expect renewed economic weakness in 2014 as the recent round of easing wears off again, and demographic forces continue to pull. Would we then slip into deflation at that point, or could yet another round of central bank interference once more have the required effects?

It comes down to whether central banks are really in control here. Are they successful in their ZIRP and QE efforts? The evidence suggests not, as they cannot induce inflation nor sustained growth. Japan’s central bank could do nothing to overcome their demographic downtrend in the 1990s. Central banks can only encourage or discourage through their tools, they cannot force. With US, Chinese and European demographics united down in this decade, I think that’s too potent a combination for central banks to overcome. It’s just whether they can keep it at bay for now. So let’s see how leading indicators develop, and whether commodities can attract a rally or not. Timing the solar peak remains troublesome as the experts cannot agree, but assuming it remains ahead, then I expect it still has a key role to play here. I expect a sunspot-associated speculative peak, and maintain the most likely asset to benefit is gold, as demographics are anti-equities, anti-t-bonds and deflationary. If it isn’t gold, then the combination of easy-bubble-making monetary conditions and solar inspired speculation should inspire a moon-shoot in another asset.