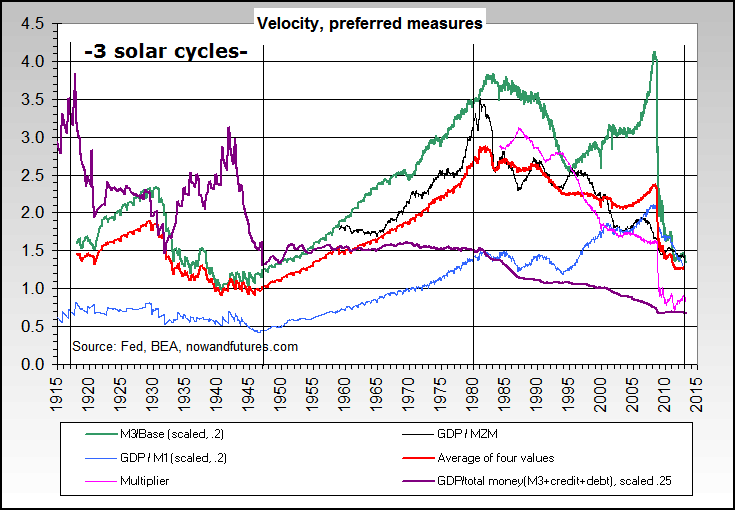 The Fed, BOE and BOJ have all been busy creating money out of thin air to make purchases in the bond market. The institutions selling the bonds then have new money in their accounts and so this produces an increase in the money supply. The intention is to stimulate the economy by increasing the money supply, once interest rate cuts have been exhausted. The ECB has this kind of direct action on standby. The BOJ has just doubled its purchases. The result of these policies is that we have seen a large and unprecedented increase in the world’s money supply over the last few years:

As more money chases the same amount of goods and services, this clearly has the potential for massive inflation. Yet, so far, the banks and institutions have largely sat on their increased reserves. The new money is parked, rather than circulating in the economy. This shows the lack of confidence in growth and a persistence of fear. So the increase in the money supply has been offset by a lack of money velocity. Here are money velocity charts for Japan, the Eurozone and the US, in order:

On the US chart, which is longer term, we see the same long term cycling in money velocity as in treasury yields:

This perhaps makes sense as money velocity would tend to be lower when money is being parked into treasury bonds in an enduring trend, and vice versa. So, are we going to see money velocity about to turn upwards, at the same time as treasuries starting a new long term bear market? Certainly, with treasury bonds up to 20 years in duration paying negative real returns (using official CPI), the potential is there. Purchasers of treasuries are buying something offering a guaranteed loss, and the main reason for that is capital preservation: they expect equities, real estate and commodities to do worse. If confidence is restored in growth and pro-risk assets then we could expect a significant reversal in money flows, out of bonds. Aggregating the US money velocity measures and zooming in on the last few years we see have seen a gradual flattening out, which raises the potential this could begin to rise in 2013:

By my solar cycles work, this is indeed what should occur. Growthflation, money bidding up the secular pro-risk asset into a peak, money reversing out of treasury bonds. But we need to see velocity start to pick up, rather than flatline. If we look back at our closest historical mirror, 1947, then in the US longer term velocity chart further up we can see that velocity just reversed out of its downtrend with about a year to go before the solar/secular commodities peak. Treasury bonds also topped around a year before the solar peak, which confirms the correlation between the bonds and velocity. So, with the solar peak expected around Fall / Autumn 2013, did treasury bonds top out and yields bottom some time last year? They potentially did, subject to where they go from here:

And using the money multiplier measure of velocity, we also see potential this bottomed too:

Now let’s say I’m wrong about the solar maximum correlation. Unless you believe the system is broken and/or not cleansed in the cleansing cycle since 2000, then a natural cycle of growth should still take hold at some point – only the timing would differ. Once the entrenched growth becomes clear then the wall of money will be rapidly tempted out of cash reserves and bonds as it remains that they are paying negative real returns. Unless central banks then very swiftly neutralise all the new money and the easy conditions – and with history as our guide this is unlikely – then there is a high risk of major inflation in the prices of goods and in pro-risk assets. If we get such an inflationary episode, we should see the feedback looping with commodities (as hard asset inflation hedges) to deliver the secular parabolic finale that I anticipate. The alternative scenarios would be these. One, we continue to only muster low and spotty growth, nothing entrenched or sustained, which keeps the wall of money largely parked, central banks on the accelerator, and stocks gently rising. Two, all the central bank interference has prevented the cleansing cycle from doing its work, and we need a big deflationary episode before any genuine growth can be mustered. I don’t rate either of these scenarios as likely. I believe we have seen a normal cleansing cycle, with equities and real estate valuation sufficiently washed out, and private sector balance sheets significantly repaired (public sector clearly not – but it is the private sector that is the engine of growth – and public debt should not reach crunch point in the major economies until later this century on current trends). Plus the cleansing cycle has been of normal duration and characteristics. The central bank action did not succeed in restoring natural growth in this period – the cycle was king – but rather their actions are likely to supercharge what happens next. With history as our guide, it is likely that central banks will be behind the curve as inflation and speculation rapidly escalate, and with little appetite to reverse or neutralise all the new money supply. Bring back in my solar cycling theory, and we are primed for that to occur 2013 into 2014, before excessive commodity prices and belated central bank tightening tip us into a global recession again. If leading economic indicators start to turn down again, then central banks are likely to respond again, with yet more stimulus. Perhaps the ECB would join the QEers. But another cycle of indicators and asset prices falling over the next few months would start to stretch the solar timing. So I’m keen to see if the current growth is the one that sticks, and that leading indicators stay in the positive. The next chart suggests that this may be so:

The leading indicator of leading indicator has just lately strengthened again instead of tumbling. If the growth can stick here, then I expect the rest to fall into place: money flows out of treasury bonds, money velocity to pick up, commodity price escalation and inflation, and all to the timing of the solar maximum. Here’s a final chart that may be predicting this: 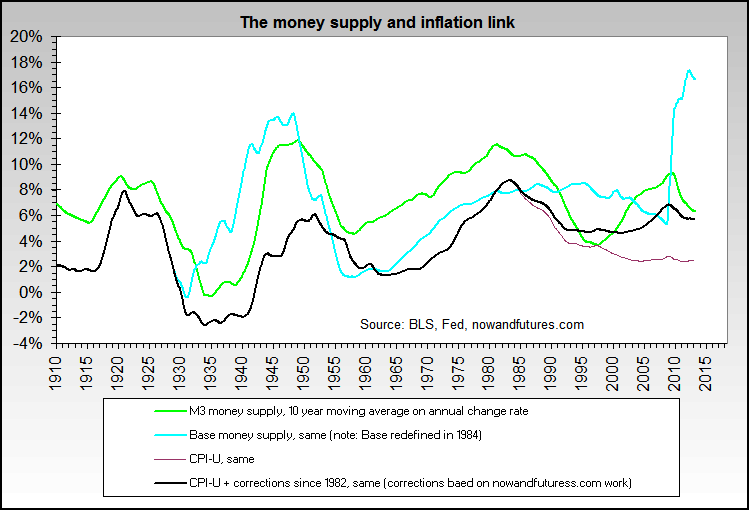