Mixed fortunes within asset classes heading into the weekend, but a summary chart below showing MSCI world equities and the CCI equally weighted commodities index reveals a general pullback began at the turn of February, which could mean the January swing top predicted by the 5 models in alignment could still be validated. 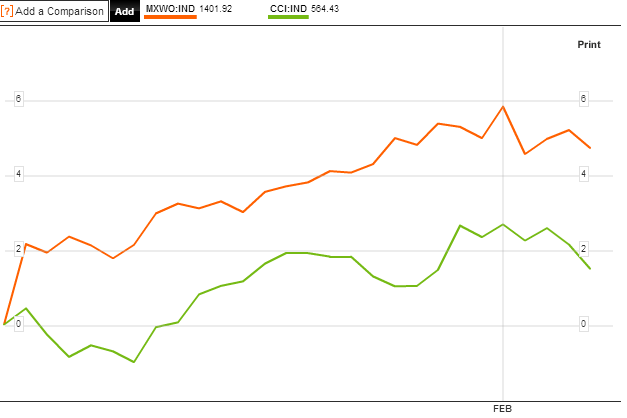 Treasury yields also peaked at the same time, the turn of February, adding to the case.

If we look solely at US stock indices, however, it would appear that they just broke upwards out of a range on Friday, which is normally technically bullish. However, the Dax made a similar range breakout in late January only to then reversed it, and there are some clues that the same could occur here, such as the Vix divergence below: 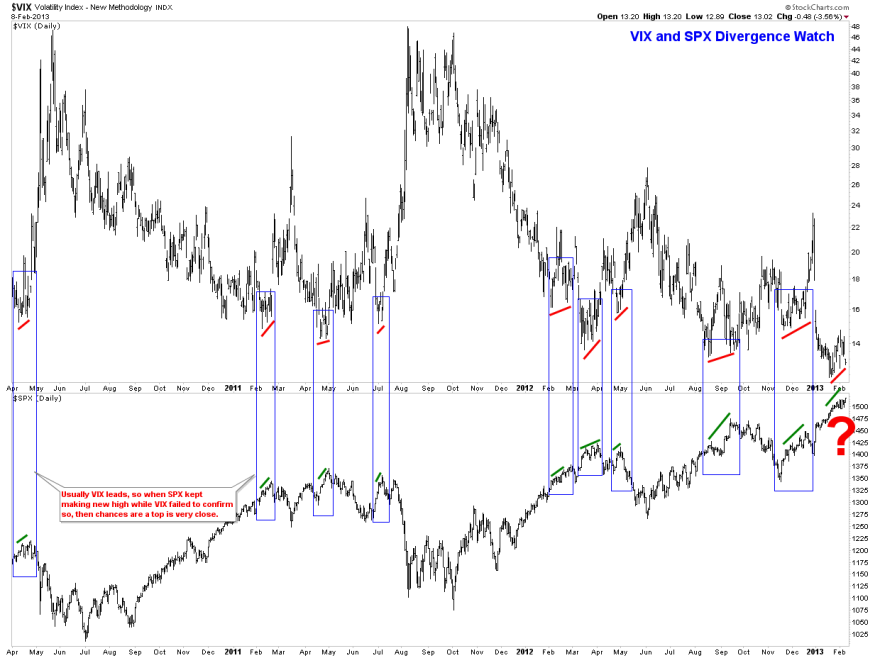 US earnings, so far coming in at a 64% beat rate coupled with a 63% revenue beat rate, have been providing a tailwind. However, economic surprises have been weakening, and also suggest a pullback should occur:

Note how surprises have turned negative, and that the last two times that occurred, equities made a swing top.

We also see some frothiness extremes in certain sentiment readings for US equities and also in equity fund flows. In short, I see more reasons for US equities to turn down here and pullback, rather than fulfill their breakout, and so join other pro-risk in consolidation or correction. I maintain that any pullback will be followed by a return to the highs and likely a higher high, which will mark a cyclical top if accompanied by negative divergences in breadth, leading indicators and so on, likely by mid-year 2013.

In terms of leading indicators, the global picture is still fairly healthy. Here is the latest combined global PMI (manufacturing and services) reading:

To add to that, ECRI’s leading indicators for the US also show strength:

Copper, which is generally a bellweather for the global economy, may have broken out: 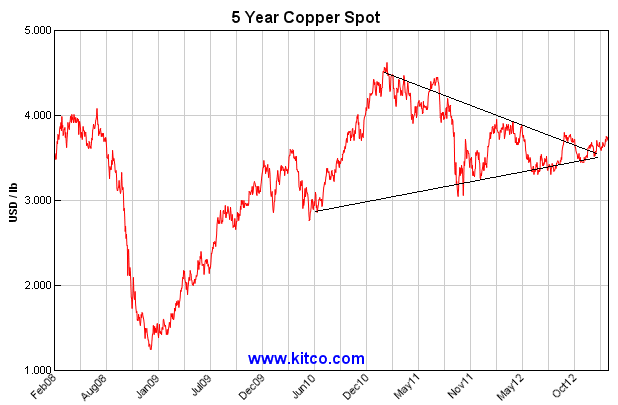 Which brings me to a chart provided by Rob Bowden showing many commodities may be poised for such upward thrust out of large triangles, with equities largely having broken out. 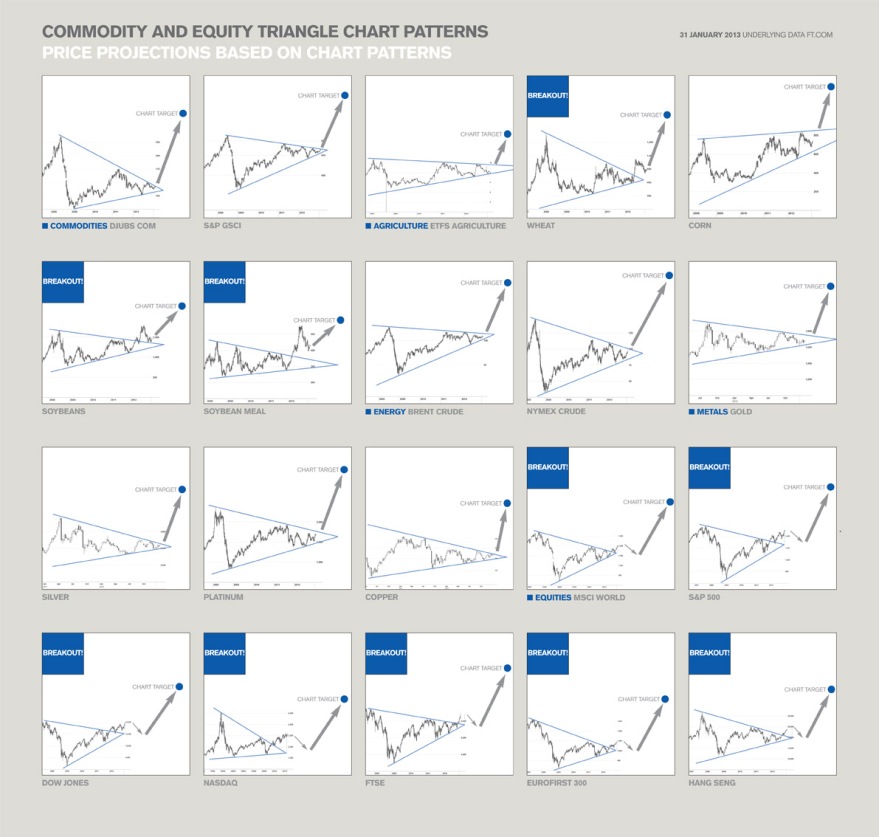 There are no guarantees commodities can break out here but the scenarios shown would largely reflect my own views – equities pull back to the nose in a final shallow cyclical bear, and commodities make a secular finale acceleration up and out.

The caveat would be if my primary scenario is incorrect (secular commodities peak and solar peak ahead), and the alternative scenario is correct (secular commodities peak and solar peak passed). NASA’s updated forecast this month continues to point to a solar peak circa September 2013, and I maintain that the probability lies with the primary scenario for now. One or the other is likely to be validated soon by action in gold, which remains tantalisingly undecided, shown here:

Into the nose of the triangle, it remains above the 200MA, which has largely supported the secular bull, but it remains perilously close to dropping out of the triangle and beneath that key MA. Sentiment is fairly depressed for both gold and gold miners which should be fuel for an up-move. But I do wonder whether we might see a lunge to the downside to flush out weak hands before an upwards break. We’ll see.

Lastly, here is a summary of global house prices. It’s a busy graphic but the overall theme is that in late 2011 and early 2012 we saw what appears to be a turning point for global real estate, with a pick up since then in markets such as Hong Kong, US, Switzerland, South Africa, New Zealand and Canada. Various European countries remain in downtrends but may turn out to be the laggards in a change in trend.

This would fit with an overall transition from K-winter to K-spring. A bottoming out in real estate and a new secular equities bull emerging in due course. One last push in commodities, before money begins a secular move out of treasury bonds and commodities and into equities and real estate.

Some glorious opportunities for those with patience.

First, European equities. There are potential opportunities here for the brave in the Polish stock index (only European nation to avoid recession in the last 5 years, p/e 7.7, dividend 4.9) or Russia (oil price dependent, but if oil holds up, p/e 5.3 cheapest on the continent), but if we play it safe, then Germany remains an economic powerhouse, but has been held back by PIIGS worries. Germany’s p/e is at 11 currently, back at the levels where the last secular bull market began.

German equity yields are currently 3.6, having reached even higher toward the end of 2011, giving us readings that have also marked great long term buying opportunities.

The UK FTSE has a p/e of 9.8, into the single digit p/es that have historically marked secular bottoms, and is paying dividend yield of 3.7 – another attractive combination. If we look back at the history of equity dividends versus gilts yields, then UK shares are relative to UK government bonds as attractive as they were at the start of the 1950s, which was when the 1950s secular stocks bull market really got going.

Plus, treasury yields are at all time record lows, paying negative real returns. Treasury yields have historically made long term waves lasting around 30 years alternating up and down. The current down wave in yields is due to come to an end, giving rise to a long bear market in treasury bonds. This should occur as money flows back into equities and real estate in new secular bull markets, and as China gradually withdraws from its excessive treasury purchase programme.

The global real estate bust since around 2007 has largely completed its course, with house prices historically tending to rise around 12 years and fall around 4 years. The table below reveals that US and Ireland, which both had major housing bulls, are now undervalued. 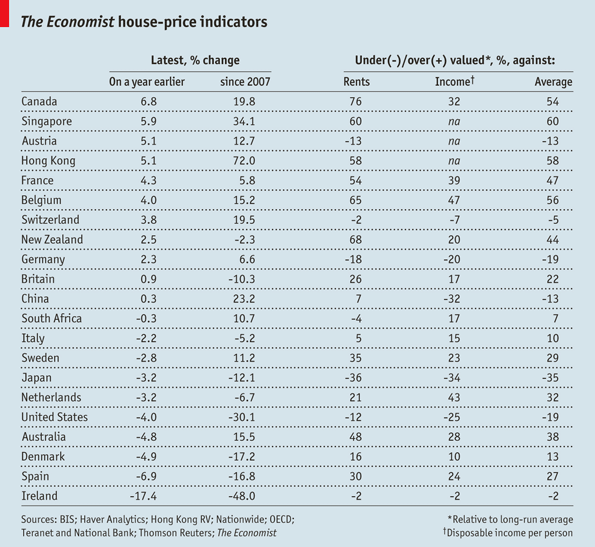 Affordibility for US housing has never been better. Coupled with the significant undervaluation shown above, US real estate looks a great longer term buy here. 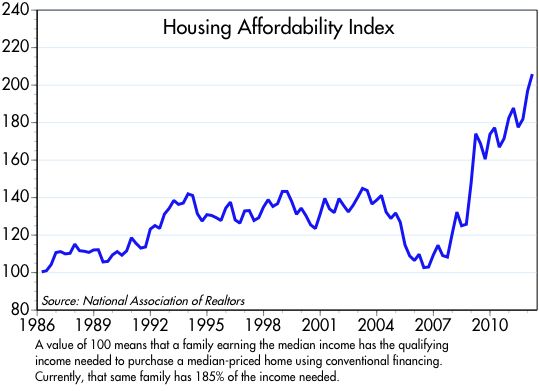 UK real estate is still somewhat overvalued, but topped out about a year after the US, so perhaps needs a little more time to bottom out. Japan stands out in the above table as the most undervalued, and in fact, Japanese real estate gradually lost around 70% of its value since deflation took hold 2 decades ago. An opportunity for the brave, but one that should again pay off handsomely in the longer term.

To sum up, there are some great buy and hold opportunities for the longer term – high reward, low labour trades. The Dax and FTSE valuations and dividends versus bonds echo what I suggested in my secular position analysis that we should be looking upwards not downwards for stocks. The record extremes in treasuries, bond yields versus stocks yields and real negative returns equally reflect that we should be looking short government bonds not long. And finally, real estate in some countries, particularly in the US, now looks historically a buy again. Drawing all together I believe the future it clear – that we will see money flowing out of government bonds and into equities and real estate. For now though, echoing Scott Grannis’s thoughts, the markets are pricing in a Lehman style event in Europe, and hence the extremes. Anything not as bad as that is likely to encourage money flows the other way. That’s in a similar vein to my secular positioning historical analysis, namely that around this point in previous secular stocks bears, things also looked a mess and fear reigned, and yet equities barely made new nominal lows after that. As Russell Napier says, there comes a point whereby equities are so historically cheap that just slightly less bad news will propel them higher. With the German Dax back at its last secular lows in valuation, that makes it, to me, a compelling buy.