Bulls still have the ball at the moment, but we remain neither confirmed in bear nor bull market so need to keep teasing out the clues.

One that got some coverage this week: two all time record high prints in the Skew (protection against an outsized move). The 8DMA of the Skew shows reasonable odds that turns out to be a top in stocks on a longer term view.

Next we see the long sagging breadth in the SP500 is similar to 2007-8. From the recent low in breadth a bear market rally is in keeping but ought to fail by the 200MA, shown circled in both instances, if this is indeed a bear.

Credit spreads are a negative divergence. Like breadth they have fallen some way and some time already. 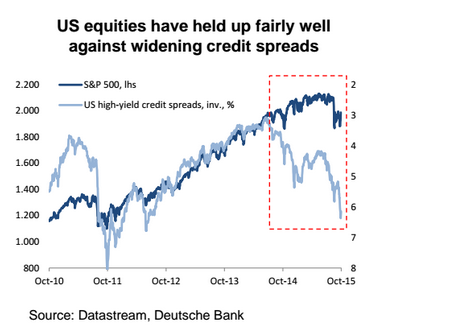 Ditto oil. So take your pick: either all these things have washed out and yet stocks have held up bullishly, or, like in 2007-8, markets have rolled over gradually (back then: real estate, developed stocks, emerging stocks, and lastly commodities) with developed equities now the last this time to complete the bear.

Support for that latter option comes from various other stock market indicators which diverged pre peak in both cases and remain in downtrends:

The big picture shows similarities to the 2000 peak also, in terms of IPOs, leverage, risk and M&A. If this isn’t a third major market peak, then we need to explain away these: 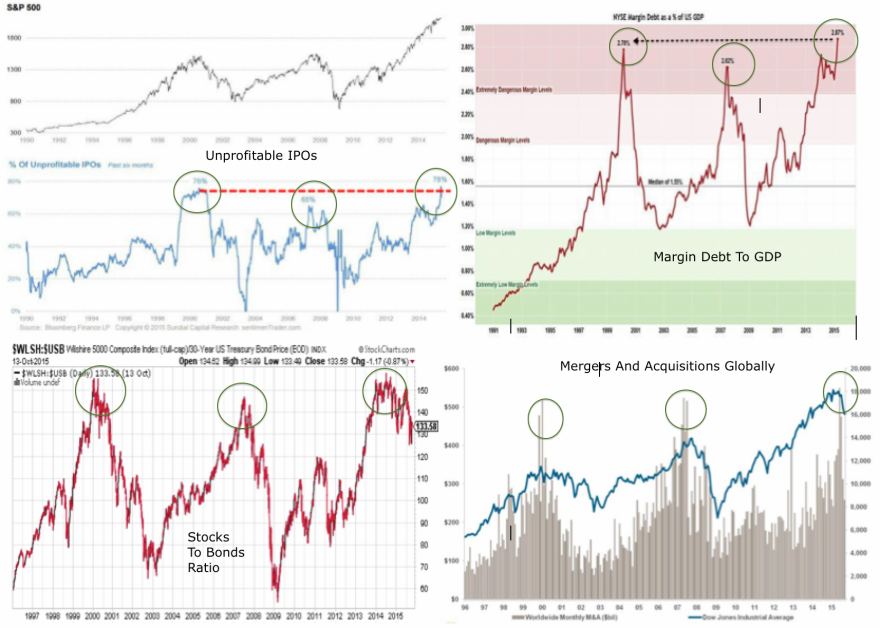 Turning to the US economy, services are generally doing fine, whilst manufacturing is at recession levels. Various overall indicators, net of oil and dollar, are doing fine, but again the question is whether oil and dollar are flagging creeping disease or whether they are more isolated troubles.

Here we see how overall US economic indicators are weaker than at previous tightening cycle commencements, perhaps providing the justification for staying at ZIRP, but either way telling the story of a very delicate economy.

World trade is negative and central banks have notably recently been having to draw on reserves, something we haven’t seen since the last recession.

Economic surprises are overall increasingly negative around the world.

Has the world entered an unstoppable cycle of negative feedback looping? That’s what I see is happening and it befits the period post solar maximum. But it comes back to the stock market: equities typically lead the economy and for much of 2014 and 2015 the levitating market prevented the weak economy from tipping over the edge, due to the wealth effect. The 10% drop in stocks in August was therefore a major blow, but, having partially retraced, what’s happens next is key.

Here we can see that other major stock markets are in a more bearish position than US stocks.

And here we see that US small caps and mania-leader Biotech are under-performing large caps, whilst gold has notably taken off (and rallied despite a pullback in oil this week).

This all adds weight to the likelihood of this being a bear market rally, with US large caps the last area of strength to break decisively.

My positions are the same. I am looking for stocks to arch over again this week or by 200MA / November at the highest / latest. However, even if this were to ultimately resume bullishly, this kind of technical price pattern historically has seen a pullback in prices from here to create a third but higher low. So if stocks do start to fall back again it still won’t be true bearish confirmation and both bullish and bearish alternatives will likely remain in play for a while longer yet. Thus, I will rather look to leading action from the likes of gold (ideally continued strength) and Biotech (ideally breaks downwards again to reveal recent stabilisation as a bear flag), plus some leading economic indicators and credit. And then there’s earnings. Earnings got properly underway last week but  plenty more big ones to come over the next couple of weeks. Thus far the earnings growth is a blended -4.6% and the revenue growth a blended -3.2% from a year ago. Given US equities are still highly overvalued historically it’s going to take some big beats for this not to weigh negative on the market.