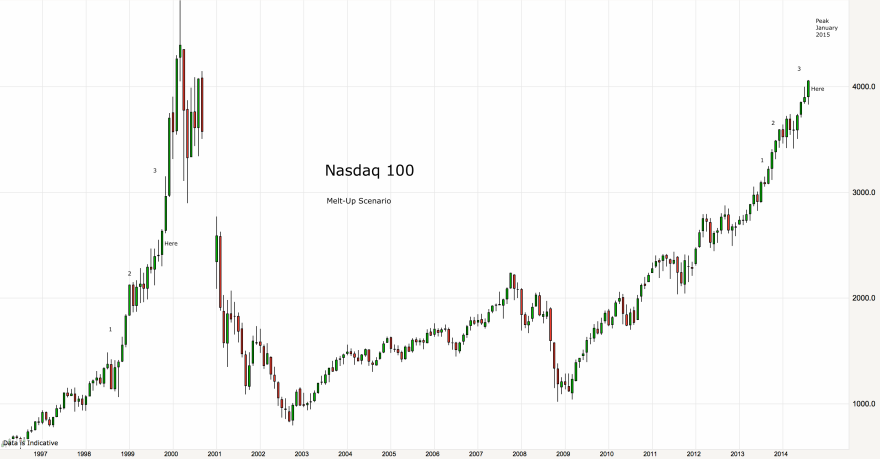 Alternative 1: The Bull Is Safe

Stocks are in a new secular bull market. This cyclical bull began from the low in 2011. The economy is recovering and we need a series of rate rises before the bull’s termination is likely. If so, the bull, right now, is faced with these:

3. Biggest ever cluster of extreme Skew readings over the last 10 months

4. Biggest ever cluster of extreme Investors Intelligence bull-bear spread over the last 10 months

5. Lowest ever net investor credit and highest ever margin debt to GDP ratio

8. Best performing sectors being those defensive sectors associated with a market peak

9. Averaging 4 valuation measures the market has reached a par with the peak of 1929 in terms of expensiveness

In other words, this market needs a reset to continue. The duration and magnitude of these indicator extremes mirrors 1987. The market is a mean-reverting mechanism and like an elastic band it will snap back. Therefore a significant reset is on the cards, and every day it has gone without a washout correction has stored up a major correction when it occurs. Therefore, even if the market were in a secular bull heading much higher, it is over-ripe for a cleansing. The maturity of the divergences and readings suggest the inverted geomagnetic seasonal downtrend from August to October is the most likely window for that to occur. The secular bull break outs post 1930s and 1970s also saw a reset shortly after breakout.

Stocks, although stretched, are heading for a blow-off top. The kind of unsustainable trajectory that everyone knows can’t last but no-one wants to miss out on. A crazy rate of ascent to crazy valuations, and then ultimately an even more devastating pop than stored up currently. Like the Nasdaq in 2000, the Nikkei in 1989, the Dow in 1929. Although neither a demographic peak nor an economic boom peak like those three events, the combination of QE, low rates and a goldilocks economy (neither too hot nor too cool) provides different ingredients for the same kind of mania result.

(Understand, I disagree with a lot of what I am writing in these first two alternatives, I am just presenting the opposition).

The most likely candidate for that currently is the Nasdaq 100, which is the most parabolic of the indices. I’ve labelled the chart to show a potential mirror with the action in 2000 and where we might be:

Label (1) in both periods shows a first burst to what participants expect to be the peak, only for a running correction (2) to give way to an even steeper final termination leg higher (3). 5 months of crazy gains from ‘Here’ would take us to a January 2015 peak, which fits well as the other inverted geomagnetic seasonal peak of the year. If the index did break into the kind of terminal velocity of phase (3) then, make no mistake, it would be the biggest stock market mania ever, because to accomplish it we would see the highest ever valuations, leverage, allocations, sentiment and more.

Apple is the dominant stock in the Nas100 and as shown it has just made a potential breakout on the monthly view above its 2012 high: 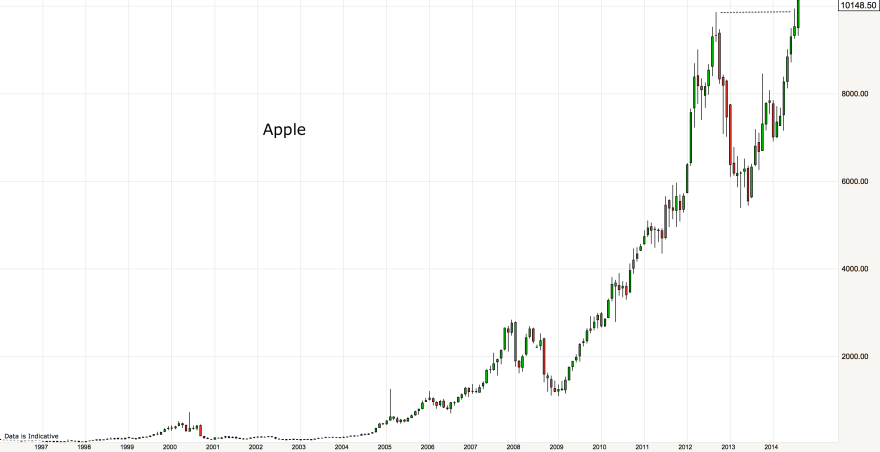 If Apple can finish August by consolidating this breakout, then it could be set for further gains in clear air above, leading the Nas100 higher. If Apple is repelled this week, it would keep the double top option in play.

As you know this is my favoured option and I have detailed my case for this many times over, so if you are new to my site, read back through a few recent posts.

This is the alternative to which all the evidence fits the best. Valuations and demographics show us to be at a cyclical bull peak within an ongoing secular bear, whilst the list of indicator extremes and divergences are features of a major peak, rather than anomalies in a bull market.

In the same way as for alternative 1, the stretched elastic band that those indicators depict means a period of heavy selling will feature in the erupting bear market, and the maturity of the indicator readings and divergences imply their satisfaction is likely very close at hand, in the period Aug-Oct 2014. Therefore, I would argue that alternatives 1&3 are similar in offering likely >20% bear gains imminently, whilst alternative 2 is the threat to my bearish stock-indices positioning.

If alternative 2 fulfils, then, because of the demographic headwind, it will require all-new levels of leverage, equity allocations and skewed-positioning. In thin volume, like in 1937, a smaller group of participants has been able to rally the market to the current level by taking Rydex and fund manager allocations, margin debt and net investor credit to beyond those previous major peaks. In all 4 of those measures we already exceed the biggest mania of all time, 2000. So, with less people available to buy the stock market, the only way to achieve the current market highs has been to stretch individual positioning and leverage to record extremes.

All the big blow-off top stock index manias of the past required leverage to rise into the peak. Therefore, with margin debt having so far peaked out in February, one important development would be that leverage peak being taken out. Tying in with that we would see various speculative targets break upwards. Expecting margin debt to be down in July, due to indices being down in that month, this last week in August becomes key, and we enter that with various investments showing obvious lines in the sand.

If IBB’s bubble has burst then it should tip over here under negative divergence. If not, it should break upwards and re-take the March high.

If JNK’s collapse in July was a true warning, then it should break down again here. New highs would invalidate.

The SP500 will either tip over here with a marginal higher high on multiple negative divergences, or it will ignore those indicators and cement an upward breakout. 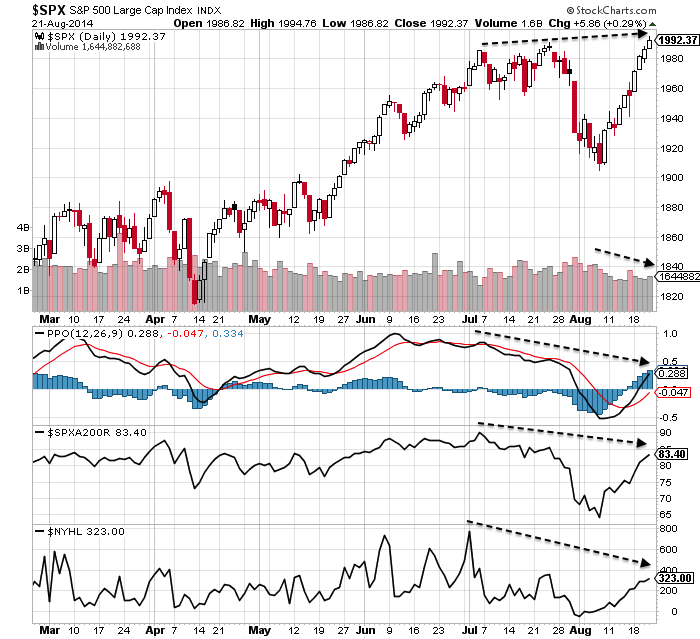 The Nasdaq indices are also operating on very clear divergences: 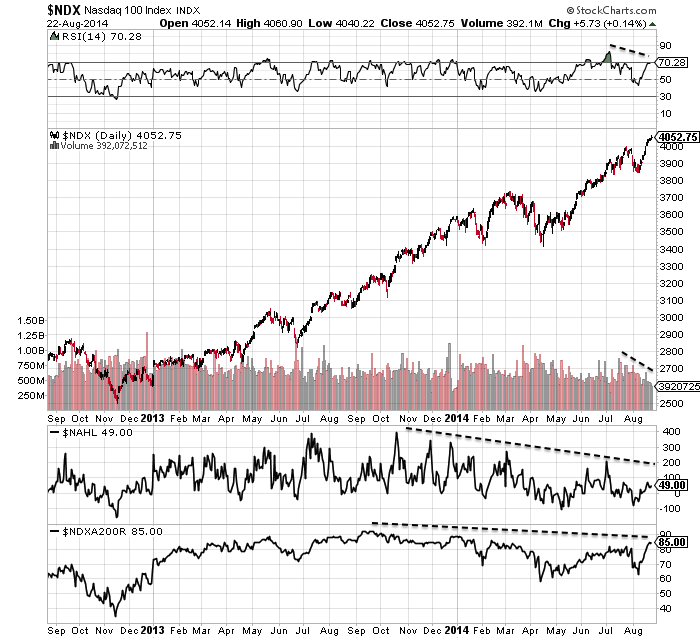 I believe the next 2 weeks will be highly revealing. It is the lunar negative fortnight and indicators argue for a retreat. DeMark sell signals were reached at the end of last week, whilst today is the new moon and the last likely seasonal peak of mid-year. If stocks retreat from here it will make the SP500 breakout a fakeout and Dow will put in a lower high than July. The February/March peak in speculative indices and sectors and margin debt will likely be maintained. All those indicators that have been screaming ‘correction’ will move further towards validation.

If, on the other hand, stocks rally this week and next and various speculative measures break or cement upwards, then the melt-up alternative will gain weight. At that point I would consider stopping my positions, moving aside and waiting, because it would put great doubt on the epicentre of the top as the speculation peak of Feb/Mar with margin debt, IBB, SOCL and RUT.

Some further charts to consider:

The Nasdaq chart above shows advance-declines have diverged. But NYSE advance declines continue to rise in line with the SP500. Does it need to diverge too before we see a proper correction? The chart below shows a divergence into 1929 but a simultaneous peak in 1937 and 1946. With other breadth divergences in play in 2014, I’m not convinced it does.

The Sornette bubble end flagged in July 2014, but the peak nominal level of DS LPPL reached so far is lower than for previous major events:

As the three historical charts show, the ultimate market peak was always accompanied by a spike in DS LPPL, just not necessarily the highest spike. That means either July was the ultimate peak, or stocks are heading higher and we will see another spike in DS LPPL ahead, probably to a higher intensity level.

Global leading indicators predict a growth peak at the end of Q3. Therefore, although the US has produced some recent good data, that may be about to roll over, and data from the other majors in turn worsen. Deflationary trends are strengthening again in 5 year break-evens and in commodities:

With Europe on the cusp of deflation, waning commodities prices may provide the tipping point.

I would argue that those who believe we need to see a series of rate rises before the bull ends are failing to see that we do not have the luxury this time. Rate rises help kill bulls because they help choke off the economy. The global economy is too weak for rate rises, the choking is occurring without them.

Lastly, there has been some debate about the validity of the high CAPE valuation for the market. So here is 5 year, rather than 10 year CAPE, produced by J Lyons as an alternative: 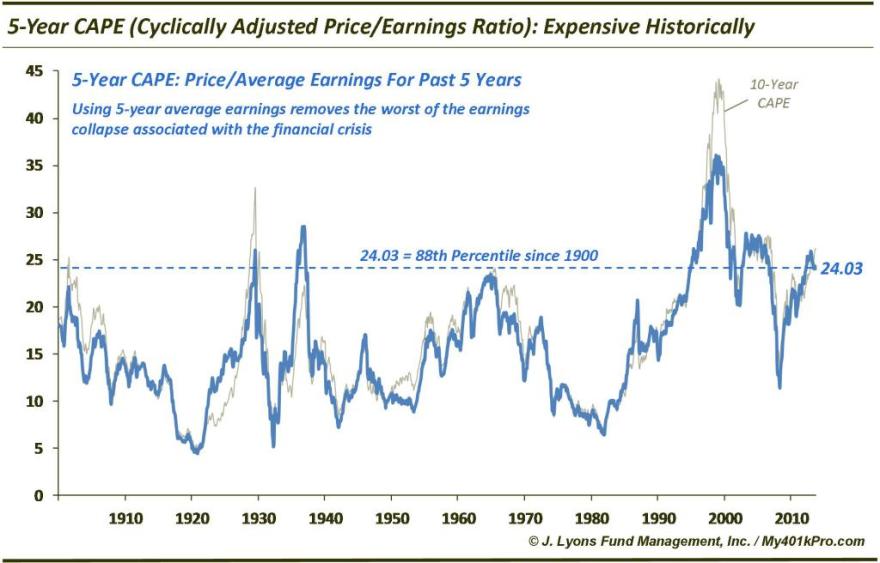 It still shows us having reached the same overvaluation as the 1929 peak, and this is echoed in Doug Short’s aggregate of 4 valuation measures:

Which brings me back to alternative 2, the melt-up. Can we really challenge the biggest mania of all time without a demographic tailwind nor a booming economy, and from already-record leverage, sentiment and allocations? I find that extremely unlikely, but if we really can, then we surely equally see the biggest crash of all time as that is unwound.

Instead, the evidence supports us being in a 1937 peak to the 1929 demographic/economic peak (1929 being 2000 in this case). 1937 did not see a parabolic blow-off, but rolled over with sufficient disconnect between valuations and the economy.

The evidence still supports us being here in the last gasps of a topping process that began Dec 31st with a peak in risk, then followed with a speculation peak in Feb/Mar, then a final peak in July. European indices appear to have decisively broken down, and US small caps are some way from their highs. The Dow broke down from its 2014 wedge in July, and volume has been very thin in US equities on this August rally back up. I have outlined my lines-in-the-sand above and see the next 2 weeks as the crucial confirmation or invalidation.

201 thoughts on “The Alternatives”