Yesterday’s action produced a doji in US large caps, or indecision, so we roll over to today. This is how the Dow and R2K look:

The Dow has been saved 3 times by the 200MA and the R2K 3 times at horizontal support. Looking for a technical trigger for the waterfall declines: both to break down and initiate the voluminous selling. The small red arrow shows that volume has ebbed away the last 3 sessions; volume remains more dominant on down days.

Biotech is in the nose of a triangle, ripe for resolution, adding to the case for the downside break to be close.

Crude oil also looks ripe for resolution. Weak growth and deflationary pressures suggest this will fall, along with equities. Meanwhile, gold and gold miners continue to make  a sturdy base and I believe they will rise as safe havens.

Demand for safe havens is high, with German 2-year bond yields turning negative. Investors are choosing a guaranteed small loss over the alternatives.

There has been a hurried exit from high yield bonds, an asset class that had become very lop-sided like equities. Investors went all-in on corporates in both shares and debt.

An updated look at sector performance year-to-date shows an alignment with the top of the stock market cycle and suggests we are beyond the peak: 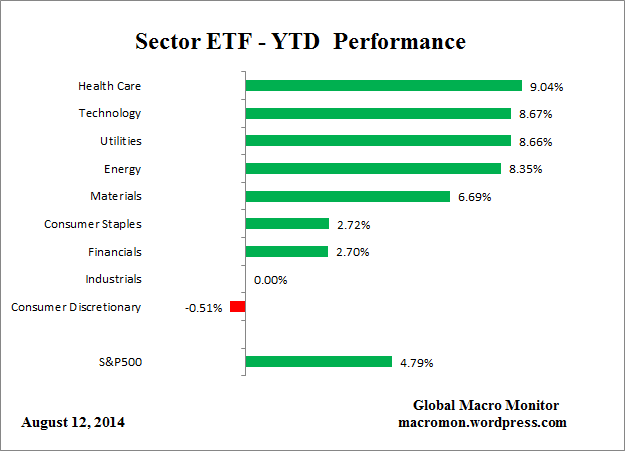 The SP500 levitation above the 200MA is second in duration to the the one that terminated in 1998. The subsequent 6 week 20% drop that occurred then is similar in speed and severity to the other analogs I recently drew together, and occurred in the typical window for drops: July to October.

Japanese Q2 GDP, net of the sales tax, came in negative. Like the US Q1 GDP print, which net of the cold weather was still negative, it reveals a world economy still in trouble.  More reliable on China data shows weakness too:

Fed officials’ vocalisations of ‘secular stagnation’ are being reported in the media, namely their belated realisation that maybe the economy is not going to normalise after all but remain weak and troubled. This was written in demographics all along and suggests they did not and do not understand that driver.