Forecasts for the smoothed solar peak still diverge as we await more a decisive sunspots trend, but the most common forecast remains for Fall/Autumn 2013 (NASA, SIBET, SIDC CM). If that proves accurate, then by history we should expect a peak in inflation and commodities within months of the solar peak. Here is the inflation guide:

I covered commodities in detail here, showing that we might expect commodities as a class (i.e. we should not need to be picky about which commodities – there should be broad participation) to rise into and around the solar peak, with a bias towards peaking after the solar peak, which could therefore be Q4 2013 or Q1 2014 even.

If commodities do fulfill the prediction, then inflation will fall into place, as those inflation peaks marked ‘C’ above were very much resultant from escalating commodities prices. The inflation ought to be ‘growthflation’, rather than a supply-side squeeze only, as this next chart shows:

We should see growth and inflation together, but with the emphasis on inflation, until commodity prices rise too far and help tip the world into recession.

If we draw together stock market history and exclude solar theory, using Russell Napier’s work, then the current cyclical stocks bull should end with rising treasury yields (6% the historic tipping point marker) and rising inflation (to 4% as a historical marker, using the official inflation rate). In other words, it is the same target: growthflation until excessive inflation and tightening. This is an important lesson, because many have prematurely called the end to this cyclical stocks bull when conditions have appeared to be worsening. We should be looking the other way: we need conditions to become growthflationary before the cyclical stocks bull can end, and since 2009 we have only seen short cycles of growth and/or inflation giving way to short cycles of weakness and deflation. The current strength in leading indicators and coincident data looks promising to stick long enough to get the required frothiness into markets and the economy.

As the Fed has explicitly manipulated the treasury market, I suggest we ignore the 6% marker this time, but just look for evidence of persistent upward trending yields to demonstrate that money is exiting that class and pouring into commodities. We have seen yields rise 25% since 2012’s low (and I believe that move is the process beginning), but they could still potentially be in a downtrend, so I want to see them break out of the downward channel and above the 200MA. 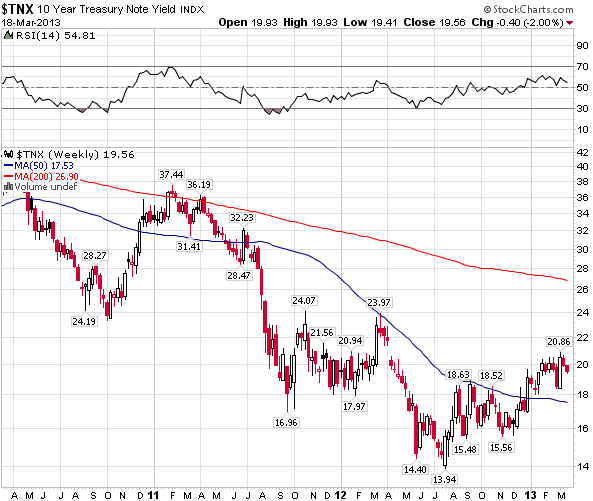 The historic 4% official inflation marker may also need to be dropped in favour of a ‘persistent upward trending in inflation’. This is because official inflation statistics have been doctored over the years so we no longer are comparing like for like. To this end we should see the main commodities in sharply rising trends, then inflation will fall into place. Here is the equally weighted commodities index, the CCI:

What do you see? A secular commodities bull market that ended with a second peak in 2011? Or a secular bull market still in tact that has been consolidating since 2011? Well, we don’t have to wait long to find out the answer because of the triangle shown. Either commodities will break upwards and out, which should then inspire momentum buying, or commodities will break downwards and out, confirming a bear market in place since 2011. Based on solar-secular history, and based on the solar peak likely being ahead, I predict the former: for commodities to break out and become the outperforming class.

An acceleration in commodities should coincide with a loss of momentum in equities. It is normal for a peak in commodities to follow a peak in stocks (sequence per Hurst). Equities should begin a topping process which is an overall sideways range consisting of a swing top, a retreat, and then a marginal new high but on negative divergences (breadth, leading indicators). Whilst this process is taking place, commodities should be rising. See here:

I have highlighted the last two cyclical stock bulls topping processes and the associated lagged peaks in commodities. This should make it clearer why I exited my stock indices longs, because although I predict a marginally higher high ahead for equities, and we do not as yet see divergences in breadth or leading indicators, I suggest we are at the start of this pattern, and the upside remaining for equities is fairly limited.

My forecasts for inflation, commodities and equities are all based on historic norms as I see it. That does not preclude an anomaly occurring. Therefore I continue to assess whether evidence supports my case. The current trends in coincident data, leading indicators and treasury yields are all supportive. However, the missing elements remain a decisive upward break in sunspots, momentum shifting to commodities, and ideally a run against the US dollar. Chris Puplava expects this latter development – that the fear and negativity that has been directed at Europe will shift to the US for a period. Here we see the US dollar index versus gold and the potential for that to occur: the USD retreats now from resistance whilst gold pushes upwards and out of its triangle.

The opposite scenario is also possible: that the USD breaks upwards and out and gold breaks down. So one relationship to watch. Personally, I am not sure whether a run against the USD will take place. However, as long as the USD range trades and does not find grounds for a bull run upwards, that should be sufficient as a backdrop for a commodities finale (as occurred for the 1980 commodities peak).

Lastly, there was a significant geomagnetic storm at the weekend. Geomagnetism has been unseasonally tame in the last few weeks so such a storm is in fact normal. The result is a shift in the geomagnetic model (all models have been updated this morning) and it is now displaying a potential top:

Based on this, equities may make a swing top here, or at best lose momentum looking out into April. Should this occur, then commodities should begin to outperform.

In summary, I see developments ahead likely mapped out by historic patterns. However, there are various indicators to watch to confirm or invalidate this, namely:

1. Sunspots should break upwards to add weight to a solar peak being ahead rather than behind

2. Commodities should break out – the CCI and gold from their triangles

3. Commodities should start to outperform equities, as equities make a range top

5. The USD should either range trade or break down