I hope you all made money in 2012 and I wish you a very profitable 2013. I made a 17% return in 2012, versus a personal target of 40%, and compared to the world’s 300 most important hedge funds, my return is likely to rank in the top 30 (source HSBC – final week’s report not yet in). For comparison, I made a 40% return in 2009 but made only the top 50 in hedge fund ranking that year due to the bumper returns on offer from a trend year. I made my lowest return of 15% in 2011, but conversely that made the top 15, as it was a more difficult year in the markets. So for me, it’s important to measure both ways, and in doing so, I can declare 2012 a satisfactory year but not amazing.

40% is a stretch goal each year, but I shall be gunning for it again in 2013. If commodities accelerate towards their secular peak, as per my forecast, then it is very much achievable, based on my existing positioning. Yet, it was commodities that provided the drag on 2012’s returns, as they ended the year essentially flat: 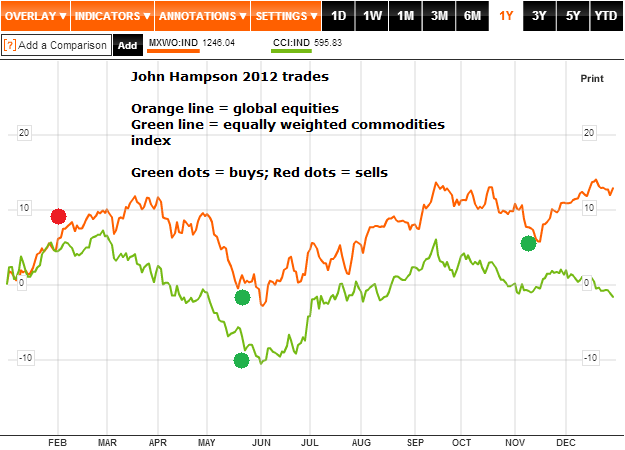 I carried forward commodities long positions from 2011 (maintaining secular positioning), added to them on the sell-off into May, and have since held. The net result is little return from this asset class this last year. It is equities that have provided the larger part of my profits. I entered 2012 with long stock indices positions, and sold out of the remainder by late Jan / early Feb of 2012, before I switched from Amalgamator to Solarcycles. Here is one of the final charts from Amalgamator showing this: 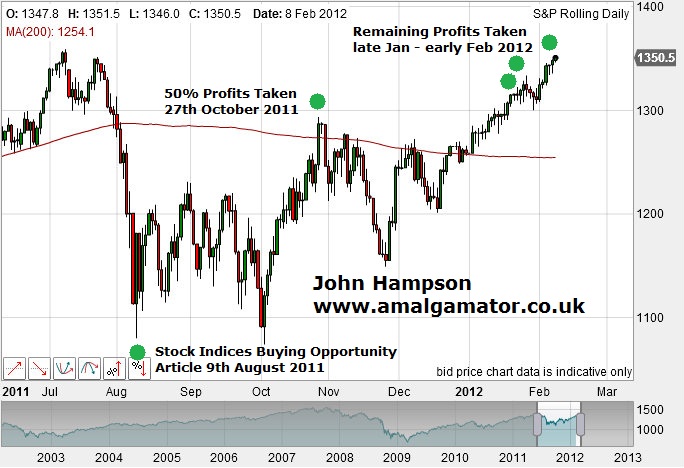 I then bought back into equities in May 2012 on the oversold/overbearish selling exhaustion, and have largely sat on those positions since. I made additional purchases at the start of November with a longer term view (e.g. China at its cheapest p/e to date, Japan at ultra low p/b (since up 18%), Russia at ultra low p/e). I advised of all my trades on my site at the time of their action, and this can all be verified using the search functionality should you be new to the site.

I also added short treasuries in that May sell-off window. This is a smaller position compared to commodity and equity exposure, and has ended the year effectively flat like commodities. I have participated little in the currency markets this last year, and overall there have been no positions in any class that I have had to abandon and take a loss on. The bulk of my trades are open positions that are in profit.

My trading style is to attempt to call the global macro position for assets correctly, namely are we in secular bull or bear markets and are we in cyclical bull or bear markets, and be positioned accordingly. Within that I attempt to call turns, and buy on oversold/overbearish indicators, sell on overbought/overbullish indicators. Throughout 2012 I have deemed us to be in a secular commodities bull market and a cyclical equities bull market, as well as suggesting that we reached a secular treasury bond turn mid-year (from secular bull to secular bear). As we turn into 2013, we cannot definitively state that all those are true, but none of them have been proven false. I think they look good, and my profit snapshot is supportive of this. I have been looking for evidence of a cyclical equities top in H2 2012, but that evidence has been lacking, and so I enter 2013 with my stocks longs still in tact and will again be looking for that evidence coming to light in H1 2013. In short, I believe I have mainly called the strategic asset positioning correctly, but the biggest surprise of this last year, in my opinion, was the flat performance of commodities, as I was expecting their secular finale acceleration to begin and be a theme of the year.

One key factor in that commodities under-performance was economic weakness in China, which is the biggest consumer of commodities. As we move into 2013, China is strengthening, which – if this can be maintained – should provide a trigger for the commodities acceleration. Here is the latest China PMI reading: 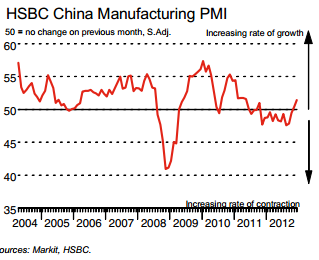 Otherwise, global leading indicators and economic data are mixed, so the overall picture remains tentative and to be watched, one development at a time. Nonetheless, my forecasts for 2013 remain largely as predicted in my series of Forecast 2013 posts in September. If you are new to the site or wish to be reminded, go here and then click ‘Next Post’ five times to view the whole series in five parts:

In a nutshell, I forecast an inflationary peak, a secular commodities peak (which could stretch into the beginning 2014), a new secular bonds bear market, and a winding out of a secular equities bear market. The shaping of this secular bear conclusion I suggested would look like this: 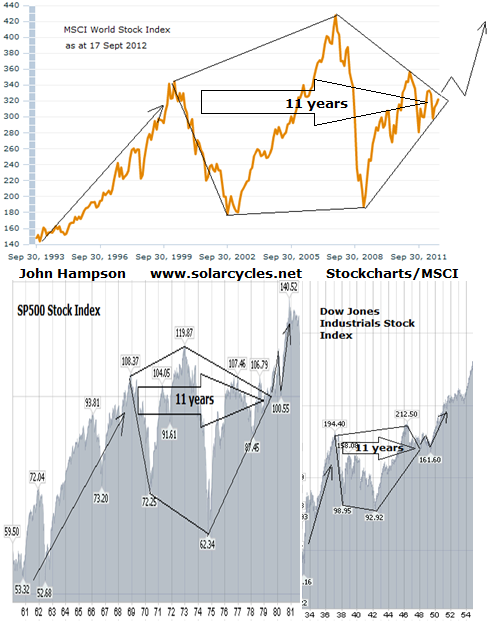 …And as we begin 2013 that MSCI World chart line is now peaking out of the top of the pentagon (we have seen such breakouts in the Hang Seng, FTSE, Nikkei and others). So I maintain that equities can rally further away from the secular bear pentagon before making a shallow and final cyclical bear in 2013/14 before new secular bull momentum erupts as of 2014/15. From the Forecast 2013 series, this was my combined forecast for stocks and commodities:

That is still the shaping that I expect, and therefore commodities ought to begin that out-performance soon. Equities should go on to make some kind of topping range whilst internals deteriorate and give clues to a cyclical top.

Returning for a moment to 2009, we stepped back from financial system meltdown and acknowledged ultra cheap assets, to deliver a very bullish year for pro-risk that a lot of participants ‘got’. In 2010, there was a mid-year retreat that had the hallmarks of a correction within an ongoing bull market, which most of those who I read ‘got’, for another year of bull returns. In 2011 however, action was more volatile and developments more confused, and I found the analysts that I read and respected at the time much more divided, with some getting it right and some getting it wrong. 2012 was similar to this. It was difficult to take the stance that ECRI were wrong in their recession call (but this now appears to be so), that H1 2012 concerns of a European sovereign default would not come true, and that, amongst others, Tiho’s detailed reasoning for a global recession and stocks bear since mid-year was not the accurate picture – at least not yet. It has been a year of fluctuating and short-lived developments and I maintain this more confusing action of the last 2 years is because we are in a gradual transition period from secular bear to secular bull in equities and from secular bull to secular bear in commodities and bonds. Wouldn’t we be glad of a trend year like 2008 (all down) or 2009 (all up), right? Well, I have some hope that this year will be a trend year for commodities: their final secular acceleration – so let’s see.

As I have previously detailed, my view is that March 2009 was the secular equities bear nominal low, and that since then we have been in a period of gradual repair. From financial system meltdown to sovereign default fears (that’s improvement), then from sovereign default fears to no natural growth (the European debt fear that was headline news in H1 2012 was very much wound down in H2 2012). I suggest that this year global growth will pick up and we will finally see the ‘growthflation’ that central banks have been keen to generate. Tightening (yields rising) and over- exuberance in commodity prices will then usher in the last equities cyclical bear before new secular bull market momentum. Of course problems and fears will still abound – the secular bull market will be built on a wall of worry – but they will gradually decrease with time.

And using lunar phasing continued to provide an edge in 2012, with the SP500 ‘hits’ shown here in green, as well as some lunar inversions in red:

I believe the most important model in 2013 will be the sunspots model, which should see solar activity reach a peak in H2 2013, biologically inspiring speculative behaviour and excitement in humans (potentially also through war and protest behaviours).

So here’s to an exciting year. Thanks for all your comments and mails and links in 2012, I value your input. And to the silent majority: don’t be shy in coming forward with a question or a view or a great find. Keep spreading the word guys – it’s the year of the Solar. Happy New Year to you all.