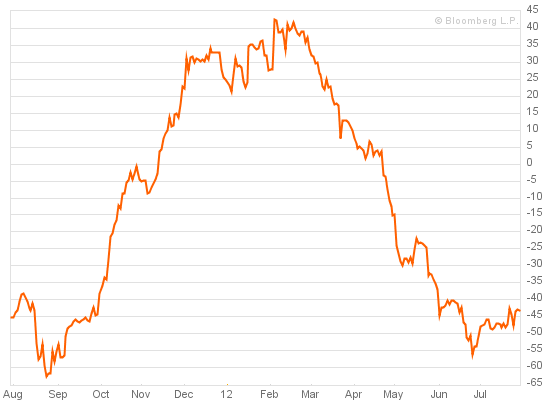 Let’s start with the big 3 macro: economic surprises, Euro debt and leading indicators. Economic Surprises for the G10 nations show increasing evidence of having bottomed and entered a new uptrend:

Economic Surprises for Emerging Markets even more so: 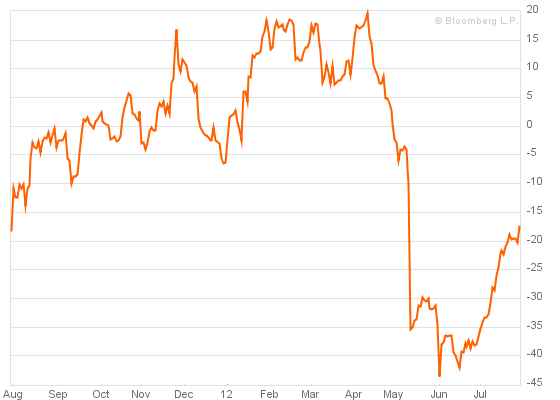 Turning to Euro debt, overall PIIGS risk continues to ebb from its 2011 highs: 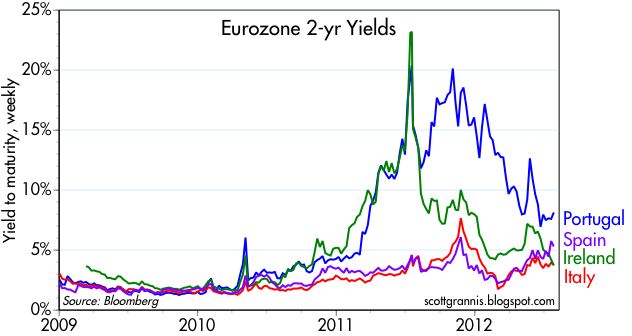 Homing in on the big two, Spain and Italy, we see 5 year CDSs having entered a consolidation the last few weeks. It is too early to say if a downtrend is emerging, or a pause in the uptrend: 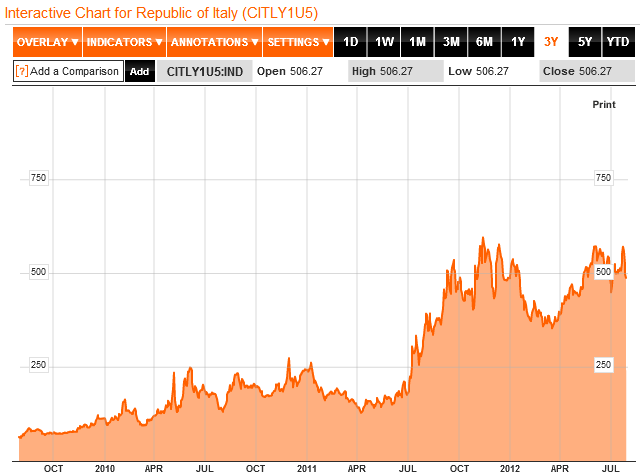 Moving on to global leading indicators, here is a summary of the latest readings from the Conference Board, showing that we do not yet see general positive signs ahead for the global economy: 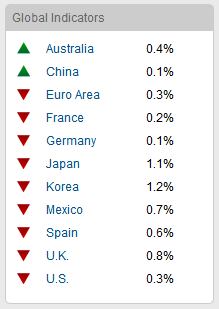 There have however been four consecutive weeks of rises in ECRI’s leading indicators for the US. Whilst still negative, they have been trending upwards again:

Drawing in US earnings, the earnings beat rate so far has been around 60%, fairly average historically, whilst the revenue beat rate has been around 48% which is some way lower than the average of around 60%. This continues to reveal that companies have maintained earnings rather by cutting costs rather than genuine growth, which in turn reflects the economic weakness that we have been experiencing.

So the key question remains whether we are now to see a turn up in growth. I maintain that we will, due to lower commodities prices in H1 2012, due to a natural upswing in growth, and due to a new round of global easing and stimulus currently occurring. That brings us to the Federal Reserve meeting outputs of tomorrow and the ECB meeting on Thursday. What should we expect in terms of further action? I suspect the Fed will reiterate its commitment to act without actually acting, but go with more dovish wording, whereas I suspect the ECB will deliver something tangible. Since Draghi propelled the markets last week with his ‘do whatever it takes’ wording, the markets are expecting something concrete. If we get nothing on Thursday, those gains may be retraced. Thursday is the full moon, and we would normally decline into a full moon. There is still the possibility of big declines the last 2 days into and on it, if the Fed and ECB disappoint, however it rather looks like we will make an inversion.

I have updated all the models this morning. We have a particularly tame 3 weeks ahead in terms of forecast geomagnetism. That provides a backdrop for pro-risk to rally. Presidential seasonality also supports this for equities: 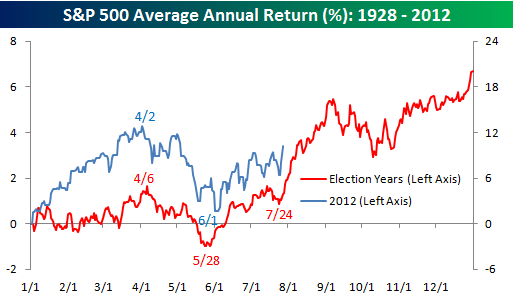 In addition, the oversold and overbearish readings for both the Euro and precious metals also provide fuel for a pro-risk rally and dollar retreat. Chris Puplava’s chart here shows that open interest and real interest rates both support an upward move for gold, with the US dollar apparently holding it back. A mean reversion in Euro-dollar therefore could sustain a rally in gold, which would be technically very important as it would mark an upside resolution out of its 9 month triangle.

Agri commodities have consolidated a little, having reached overbought levels. Fundamentals are still currently supportive with more normal weather conditions perhaps returning as of September, which keeps harvest fears at the forefront for now.

Treasuries made a large reversal on Friday from all-time highs. It is too early to judge whether that marked a significant top. On the one hand, the overbought and overbullish parabolic recent move is ripe for an enduring reversal, but on the other hand the Fed is still a supportive player in that market.

OK, bringing it all together, the question on my mind is whether I want to take some pro-risk profits off the table here into the FOMC and ECB. For anyone new to my site, my portolio of positions is currently 100% pro-risk, with the biggest weighting long commodities (precious metals, agri, energy) then long equities (various global stock indices), then short treasuries in a much smaller weighting. I currently have no currencies positions. Drawing together the secular and the solar I anticipate a pro-risk rally in H2 2012 through to the solar maximum of 2013, but with equities wilting before we reach the solar maximum whilst commodities make their final blow-off secular top. Equities could therefore top out before the end of 2012 but not before they’ve had a pop to new highs.

Right now the picture looks more supportive of that general scenario that I have been promoting for some time. Economic surprises now look supportive, Euro debt is showing signs of coming off the boil again and US earnings are good enough. Leading indicators remain the area of concern, but if I am right in my reasoning for why they should begin to improve then I believe that provides the final piece of support for a move to new highs in pro-risk. Chinese leading indicators in particular are important for commodities. However, soft commodities have had a thrust due to global wierding and precious metals have the support of reinforced negative interest rates from the latest central bank interventions. Precious metals enter their seasonally strong period of the year as of August, with Indian wedding demand one factor, and global wierding remains supportive for soft commodity prices for the near future.  By solar cycles, inflation should peak around the solar maximum, and the price rises in softs that began in June should feed through into in inflation 6 months later. If they can further their rises and oil was to also rise on H2 growth (or supply issues) then we could indeed see that acceleration in inflation into Spring 2013.

So right now I am going to maintain all my positions and not take any profits. However, if pro-risk pushes up significantly more today and tomorrow before the FOMC outputs then I may trim back. I will let you know in the comments if so.

6 thoughts on “State Of Play”