A very powerful bullish day on Friday looks to have sealed a period of (upward) mean reversion in pro-risk. Stocks, Euro and commodities all participated, with crude up almost 10%. Here is the Russell 2000 – a high volume, engulfing candle that broke out beyond resistance and is historically the kind of technical move that triggers more upside ahead.

How far can we mean revert? If we look at bullish percent over call/put ratio, we are still in the lower range reached at the bottoms in 2009, 10 and 11.

In other words, Friday’s bullish candle has not yet neutralised the overbearishness. Beyond mean reversion, it becomes a question of the 3 main fundamental indicators:

2. Euro debt issue diffusion – the outputs from the Euro conference that spurred the big bull day also dropped Spain CDSs out of their upward channel:

And 3. Economic Surprises – still languishing, but potentially bottoming, as we see a level in the G10 chart below that was reached at last year’s low, together with a current bounce – only tentative though: 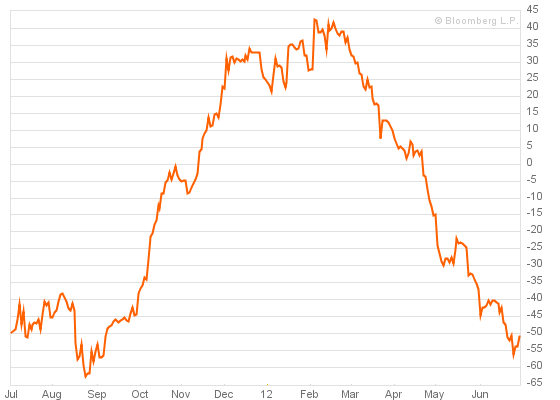 My expectation is that pro-risk rallies in H2 2012, in line with previous secular/solar history, before stocks give way and commodities make their final blow-off top around or following 2013’s solar maximum. I expect piecemeal policy action to diffuse Euro debt, as Euro leaders remain committed to no break up and no defaults. I expect leading indicators to turn up thanks to oil and commodity prices having come down, and governments easing and stimulating again on top of what is already extremely easy and supportive global monetary conditions. This week we have the potential for rate cut announcements in Euroland, Denmark and Sweden. And I expect Economic Surprises to begin to rise again, because this is a mean reverting indicator – i.e. as data disappoints, forecasts are cut down, until data starts to beat again with the bar lower. It matters less that the bar is lower, and more that expectations are beaten.

The geomagnetism which was forecast from 29 June through to 3 July is indeed in progress, at a level in line with expectations (not too major). 3 July is also the full moon. I therefore expect some pullback in the first half of this week but unles we retrace Friday’s bull candle in full (which I think is very unlikely), I believe it sets us up well for a bullish period into around the 20th July, supported by upward pressure into the new moon, less geomagnetism forecast (although check back tomorrow as Tuesdays are the forecast updates and my model updates), some more easing and stimulus from select governments, continued mean reversion away from oversold and overbearish pro-risk, and US earnings getting underway.

8 thoughts on “This Week”