I have updated all the models, on their respective pages.

Geomagnetism continues to be a good guide. Here I have highlighted the periods of higher geomagnetic disturbances corresponding to periods of correction for the stock market. The question is whether the most recent period if now over, or continues. Seasonality suggests we should experience fewer disturbances through to August, which if so, would be supportive of upside for pro-risk. That would fit with a period of mean reversion coming to pass away from recent extremes of oversold and overbearish in pro-risk.

The shorter term geomagnetic lunar models continue to perform. The last two lunar turns were on the nose and the cumulative geomagnetism trend has provided an overall route map for the markets. Here are the Dax and the CRB commodities index, with the tails showing the forecast for the next 3 weeks. As yet the model does not show a renewed upturn, but commodities, being below model, have room to pull up.

Which brings me to the title, as in the last week we’ve seen soft commodities wake up and put in daily gains of up to 7% in some foodstuffs, as the hot dry weather in key producer parts of the world comes into focus. Agri gains have been made despite other pro-risk assets pulling back. As I previously stated, whether the extreme weather continues into the end of July is likely to determine whether or not we see a run away rally in soft commodities to new highs in H2 2012.

I have previously shown charts displaying close relationships between the different commodity classes, so if softs do take off in a meaningful way, that should provide the impetus for precious metals to break out.

The all-commodities chart since 2000 doesn’t look too bullish:

Yet, take out energy and a secular bull appears very much in tact. Fluctuations and weakness in oil and natural gas have largely accounted for what some analysts have identified as technical weakness in the overall commodities picture. Commodities ex-energy:

As you know, I believe the secular commodities conclusion is ahead, following next year’s Spring solar maximum. Increasing sunspots inspire speculation and growthflation. The current window of economic weakness is providing the opportunity for another round of global central bank supportive and stimulative interventions. More needs to be done in this regard, but I expect the natural pick up in growth, speculation and inflation combined with the aid of the central banks to come to fruition.

Currently, we continue to see problematic levels for Spanish and Italian CDSs. Economic Surprises continue to languish. Chinese leading indicators came in better yesterday at +1.1% (Conference Board), but other leading indicators have been largely negative. I am not belittling these issues, but refer you again to the secular position and recent extremes in indicators, whereby we are more likely to see pro-risk rise on slight improvement in these areas, rather than fall again.

And here is a chart from Scott Grannis showing how US housholds have largely completed their secular deleveraging, allowing the private sector to releverage from here (despite the increase in public debt). This also fits with US housing increasingly showing it bottomed already. 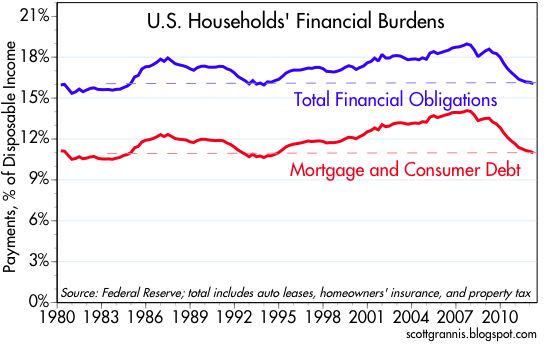 Evidence increases that we are into a secular inversion period. The timing is however critical – when to switch out of commodities and bonds and into stocks and real estate, in terms of longer term buy-and-hold. I maintain the blow-off top should still be ahead for commodities, which provides the best opportunity out of the 4 classes into 2013 – I believe. But that will be the final pop, as relative cheapness of stocks and real estate to bonds and commodities reach historic extremes.