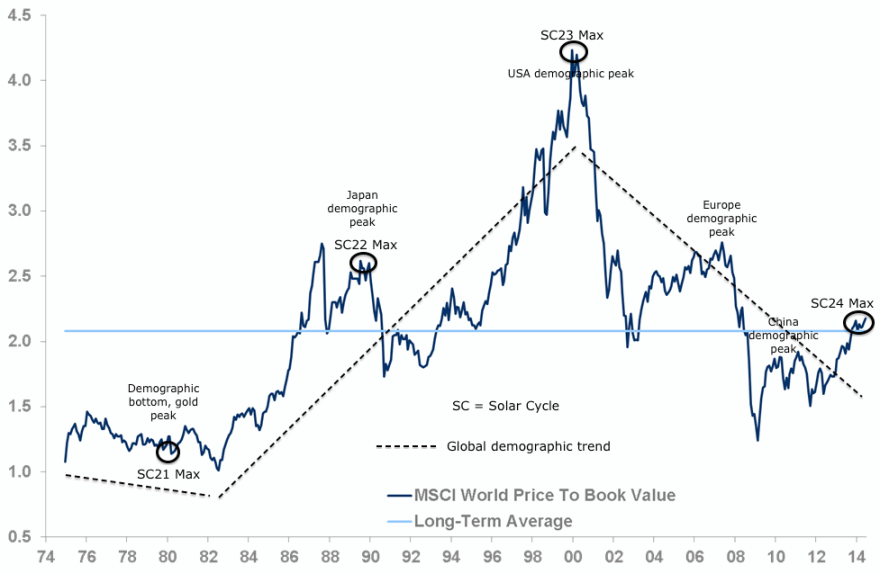 The overall dotted line trend matches the black global demographics composite in the next two charts:

Conventional analysis of equity valuations considers cheapness relative to history and averages as a predictor of returns. But valuation has to be considered relative to demographics, or rather, long term trends in valuation ARE demographics. Expensive will get more expensive if you have an increasing swell of people in the right age group to buy the market, and vice versa. By global demographics, we are destined for cheaper valuation yet, and the current bull rally is a counter-trend solar-maximum-inspired speculation peak.

The MSCI world index is weighted like my demographic composites. Therefore the US demographic peak was the most important peak and put in the main top. Since then Europe and China have joined the trend change, making post-2009 the most heavy collective demographic pressure yet. Accordingly, we have seen interest rates held at unprecedented low levels due to the resultant economic weakness. 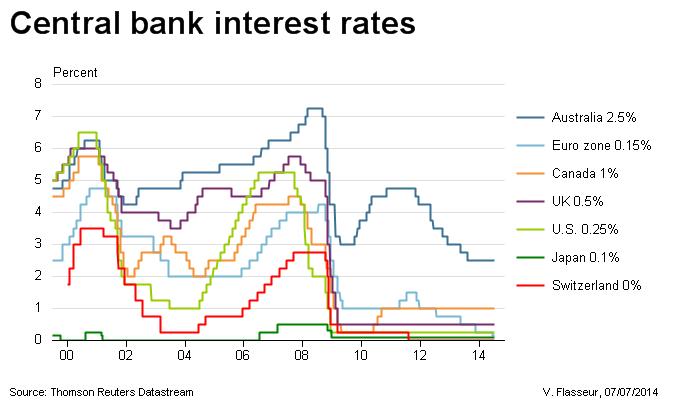 If demographics are so dominant then we should see evidence in the current counter-trend bull of major weakness under the hood, which we do.

Whilst the SP500 has grown 120% in real terms since 2008, real revenues have grown just 2%. Companies have engaged heavily first in cost cutting then in buybacks. Sales remain elusive.

Also, the last 2.5 years in US stocks have been over 80% multiple expansion versus less than 20% earnings expansion, and this price-based rather than earnings-based expansion in equities whilst the economy has remained weak has taken stocks cap to GDP to an all-time record:

With a dwindling pool of stock market buyers under demographics, the market has been bid up on lower volume and increasing use of debt, taking the latter also to a new all-time record:

This mix of unhealthy attributes has taken stock market risk to an appropriate record:

In summary, the stock market rally since 2009 has been built despite demographics, largely through QE money, stocks buybacks, private investor leverage and a speculative pull into the SC24 solar maximum. But accordingly it is a rally at high risk of total reversal, it is a tower of sand.

It is the unprecedented collective demographic downtrend now in place between USA, Europe, Japan and China that make it so potent. World trade is depressed and each of these areas is struggling individually. Europe is on the cusp of deflation and recession. Japan’s Abenomics is not working. The USA, although outperforming currently in certain measures, is still operating at a lower all-round level of economic performance versus previous decades. And China, the last to tip over the demographic cliff, is now facing a bursting housing market and shrinking growth. In the 2000s China was driving the world economy, offsetting the USA which had gone over the demographic cliff. Now the world economy has no driver, with India’s economy still too small to offset all the majors. It makes for a negative feedback looping that ZIRP and QE should be powerless to stop.

Turning to the near term. Froth has gone back up to the max.

Increased volume did return yesterday post Labour Day, to test the validity of last week’s rise. Indecision was the result, so we roll over to today. The market is up so far with a burst on Ukraine peace news. Recall the Bin Laden top? Bin Laden captured and killed 2 May 2011, the market burst up, closed down and it marked the top for the year. With the Dow, JNK and IBB all still at double tops, it could go either way here. So let’s see how today closes.