The evidence for a speculation peak delivered at the solar maximum is better than I could have hoped, yet I’m on the wrong side of it and feeling the pain. When I look back at this post that I wrote January 13, the multi-angled case that I had for a top is still very much applicable. So why have equities gone up not down since?

Firstly, the solar max extended beyond scientists’ predictions from late 2013 to what looks like a smoothed peak circa Feb/March 2014. Not much I could do about that. Since then we have seen solar activity retreat, along with margin debt. Drawing on the history of both combined, we can account for stock indices rising into Feb/March but not since. Some retrace in equities was historically normal, but not these persistent higher highs.

Secondly, it would appear we needed more mania. When looking back at gold 1980, Nikkei 1989 and Nasdaq 2000, it’s clear that the manias were fairly intense. Therefore, the record-breaking stretching of indicators that we are seeing seems appropriate with hindsight. I wasn’t trading in 2000 to experience it. The question is when is it all going to snap? There is evidence of both capitulation and ‘all-in’ which suggest the snap should be close, but more melt-up could yet occur before it finally rolls over.

Thirdly, leading indicators, as measured by narrow money, suggested a pick-up in the economy as of May. As equities were able to range-trade until we reached that point, strengthening data has since given them a tailwind to rally further. Those leading indicators now suggest growth could peak out at the end of Q3. So could equities rally and melt upwards for weeks and months yet? A more detailed look is required, so here goes.

This is how the Dow looks. Volume has been ebbing away. Stocks can rally on thin volume, but those rallies don’t tend to stick. Volume is likely to return once it tips over. The action in the Vix and put/call ratio have an air of capitulation. 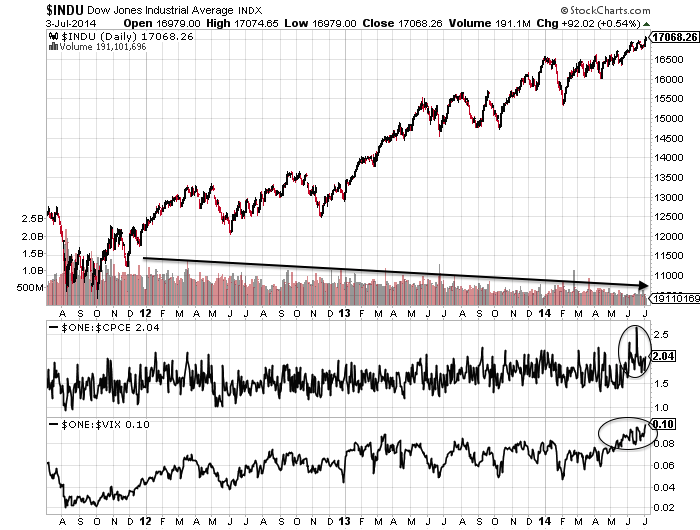 This is how RUT, COMPQ and IBB look:

If equities were to roll over here, it would be more in keeping with developments in the solar max and margin debt.  The Feb/Mar peaks in RUT and IBB, two of the key speculative mania targets, would be maintained and this would fit with the likely smoothed solar max. Speculative peaks have aligned closely with the smoothed solar max in the era of global instant access, whilst certain indices peaked the same month as margin debt both in 2000 and 2007.

If, on the other hand, RUT and IBB break upwards and out in July and COMPQ puts some distance above its Feb/Mar peak, then it would be more anomalous. How do we account for stocks rising whilst leverage declines? Buybacks still strong, CLO leveraged loans still strong in Q2, thin volume rises, short covering? All applicable to some degree, but it’s still anomalous.

The way things stand, the best fit is still that we are in the vicinity of the last peak in a trio that began at the start of the year. That this is a final melt-up in large caps before the roll over. A trading range (primary distribution) before a final leg up was seen in 1929, 1987 and on the 1989 Nikkei. At the reverse end of the spectrum, 2009 saw a trading range before a final leg to the downside.

In all instances, the final overthrow leg lasted around 4 to 8 weeks. The current break out up leg on the SP500 is just entering that range. Averaging the price increases/decrease, we might expect the SP500 to reach over 2000 before rolling over. Earnings season starts next week, others have mentioned 15 July as relevant, and the seasonality of geomagnetism turns down definitively as of July. So maybe stocks can rally a few days more, reach over 2000, and then roll over against an earnings season backdrop.

These six indicators are calling the market down with little scope for delay:

So I would be nervous about hedging with longs here, and won’t be doing that.

The next four charts show evidence of the mania.

Turning to fundamentals, equities have front-run a return to normal: 10% earnings growth and 3% economic growth.

Economic data in 2014 has been overall reflective of mediocre growth. Barclays estimate for Q2 growth is 2.7%, add to Q1’s -2.9% and H1 is overall negative. Not on track for 3% annual growth. Data items such as the employment report or financial stress conditions appear superficially bullish, but reflect conditions just before previous market peaks.

Economic surprises are still negative for the US, but as stocks have largely ignored the bad items, I think it’s fair to say the perception is they have been largely positive.

Earnings season begins again this week with 75% of companies having issued negative guidance pre-season. The theme of margin expansion not revenue growth continues to dominate into 2014:

Continued disappointment in both the economy and earnings is likely given demographics and debt. So, in short, at some point equities will turn down as their front-running is proven to be just overvaluation, and earnings season presents a chance for that to materialise. A glance back up at the ‘mania’ charts shows that when equities do turn down, they will likely enter a devastating bear market. There has never been a gentle normalisation from such lofty valuations, euphoria, leverage and compound growth extremes. 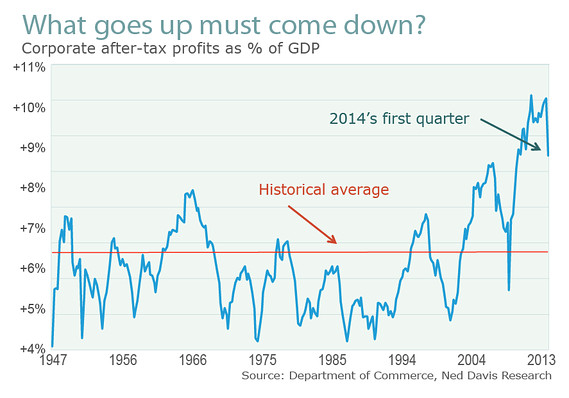 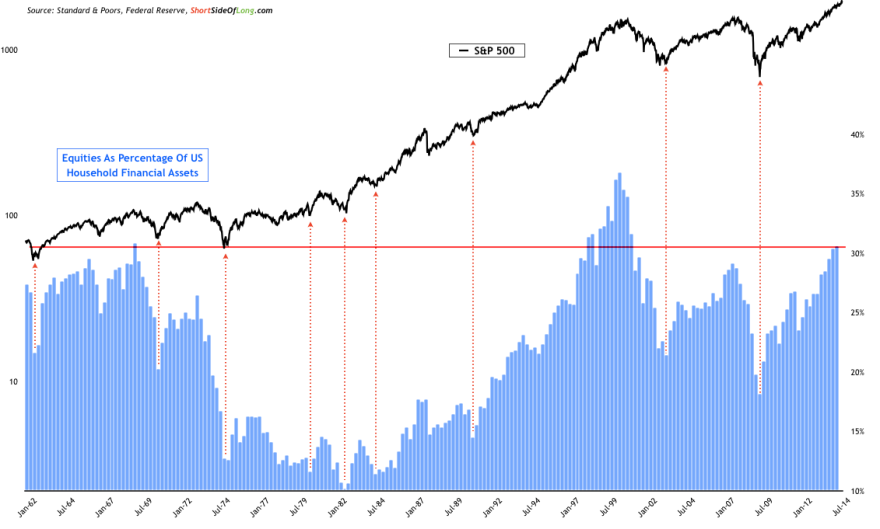 That last chart shows very skewed positioning in crude oil, the message being that it may well tumble going forward. That would be consistent with a deflationary shock rather than an escalation of inflation. I maintain my caution on commodities, aside from precious metals.

Time to sum up. I’m short equities and underwater, feeling the pain. I expect some of you are too, and maybe annoyed for having ‘bought into’ my analysis. Personally, I can’t regret too much, as I don’t think my analysis has been particularly lacking. Rather I have consistently presented a cross-referenced, multi-angled case and the large part of that analysis remains applicable today, despite 6 months having passed since I was first convinced. My distinguishing research thread is the solar cycle, and I believe we are seeing firm proof that the solar maximum does inspire speculative peaks, in a real-time test, but equities now have to turn down, and into a bear market, within a short time of the solar max, before that can be truly confirmed. Frustratingly I’m on the wrong side of it currently, having been too early with shorting, as certain reliable indicators have been overrun by the mania-drive of the sun. Lesson learned. Now it is a practical matter of managing the drawdown. As noted further up, there are several indicators that suggest the turn ought to be close at hand so I do not want to hedge with longs. I have refrained from adding any more short whilst we see if the melt-up steepens further. I will stop some trades if things go crazier yet, and re-open once the market has more definitively turned. But I am not keen to do that as I believe the turn has to be close at hand.

I have two scenarios in mind. One is that the RUT, COMPQ and IBB have to turn down here to honour the Feb/Mar solar/leverage peak. That makes a top fairly pressing and would fit with those indicators calling for little delay. Next week is the descent into the full moon and the start of earnings season, so they could fit into the scenario. The SP500 could reach over 2000 within a couple of sessions to fulfil.

The second scenario is that the melt-up steepens and all indices break out. Positive economic data expected through the summer assists, and maybe the solar maximum has another big burst coming. The issue I have with this continues to be the ‘fuel’ for the rally, given that margin debt is declining, households are already highly exposed, volume is waning, sentiment and euphoria suggest bear capitulation, and various divergences are mature. None of these have stopped the rally yet, so I have to respect that it may still be possible. If all indices do break out then I’d be looking for an eventual top followed by a ‘second chance’ retrace before ultimate steep falls.

69 thoughts on “Burned By The Sun”