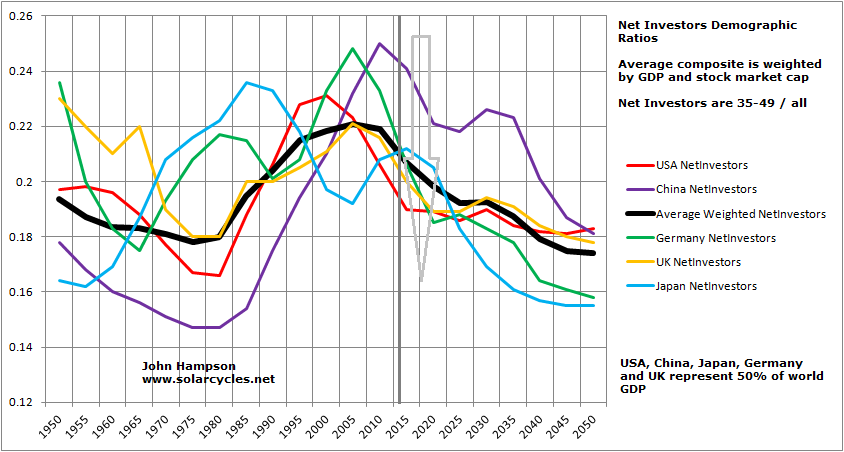 History in the making for the US stock market, updated:

5. Euphoria and sentiment composite readings only exceeded in 1997-2000

8. Margin debt to GDP and net investor credit at all time extremes

These various measures collectively suggest that the bull market is mature, that stocks are expensive, that investors are all-in and that we are looking at a major top. The only bigger mania in history was 2000, which, in contrast to now, had a demographic tailwind.

There are three ingredients for a super peak: a solar maximum inspired speculation peak, a demographic peak (new buyers buying), and a leverage peak (same buyers buying more). 2000 had all three, but 2014 lacks the demographic tailwind, and for that reason we should not expect to reprint 2000’s all-time extremes.

Over the last 18 months we have seen the requisite evidence of a speculation mania, inspired by the solar maximum. During that period we have seen the stock indices diverge from earnings, fundamentals (economic), and smart money flows, and we have seen sharp escalation in leverage (margin debt, Rydex leverage). We reached dizzy valuations in small caps, biotech and social media, and by various measures, major stock index valuations already exceeded 1929 and 1968 peaks.

On current evidence it would appear the solar maximum peaked out along with the main speculation targets around February 2014, which is also when margin debt and net investor credit balances reversed.

If stocks were to move materially higher from here, then we would need to see an extending solar maximum, a further reversal in leverage to print new extremes, and/or a stream of new buyers.

We see evidence for the demographic headwind in shrinking trading volumes, and if we couple that with the readings in household exposure to equities, fund manager allocations, and institutional versus private buying, which suggest saturation, I suggest it is unlikely that we have the fuel for another significant move higher in ‘new buyers’.

I then look at the extremes, spike and reversal in leverage and it is unlikely that increased ‘buying-on-credit’ can provide the fuel for another significant move higher from here. So even if the solar maximum were to extend beyond expectations then I suggest it is highly unlikely that equities would be bid up significantly higher from here, as if this were 1928, as both ‘more-buyers’ and ‘more-leverage’ look exhausted.

Since 2014 began, relative performance of utilities and treasuries, breadth loss in equities, and developments in sentiment have all echoed previous stock market peaks. These warning signals are now mature and add to the likelihood of stocks breaking lower from here, not higher. Not only that, but the combined settings of leverage, complacency, euphoria and levitation suggest that we are on a cliff-edge heading for a sharp crash.