The lunar positive period begins here for the next two weeks. Is there a buying opportunity in pro-risk? The geomagnetic trend is still up. Sentiment is at pessimistic levels in a variety of commodities which would be fuel for a mean reversion rally. Sentiment remains a little frothy in equities. Economic surprises for the G10 are in a downtrend and negative. US earnings and revenue beat rates are so far unimpressive. PMIs and leading indicators for key nations have overall weakened a little in the latest readings. Here is the combined picture for pro-risk: 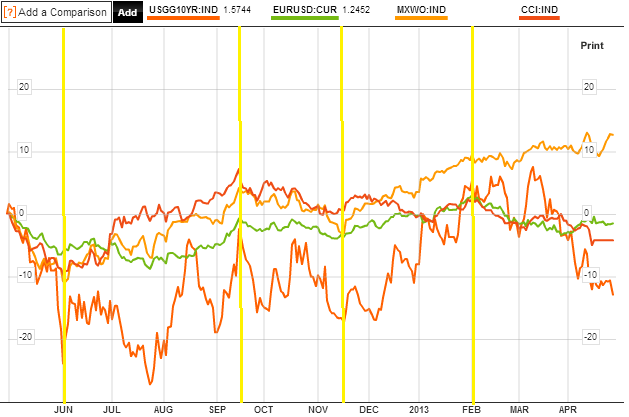 It still looks like a correction has been in place since the turn of February, but global equities as a whole have managed to carve out a sideways range rather than down. By 5-models-in-alignment the next move would be up from here into mid-year to make a cyclical top. PFS forecast that recent soft commodity prices will provide economic improvement ahead again, as cheaper input costs make for growth. If solar/secular history is to reoccur here, then commodities and treasury yields should start to make their move. I would like to see some evidence of change in trend in economic surprises and a renewed pick up in leading indicators to bolster this likelihood.

Back to demographics. Here is a reminder of real UK equities:

The biggest real gains came in the two solar cycles from 1980 to 2000. I have used the population pyramids to draw out the three demographic trends that have been shown to have a correlation with stock market performance, namely the middle/young ratio (m/r), middle/old ratio (m/o) and the proportion of net investors. We can see that the period of bumper gains in UK stocks was one in which all three measures were trending upwards – a kind of demographics ‘holy trinity’:

Looking forward there is no such golden period ahead for the UK. The caveats, as some of you pointed out, are that immigration policies can change (changing the demographic projection) and investor behaviour may change (disturbing the correlation with the local stock market). But barring any major changes, the UK stock market may struggle going forward.

So here are three countries that do have such a demographic positive unity ahead, i.e. all three measures trending up for a period.

The first is Japan. The black lines are the solar maxima. The outer green box is the overall positive period, and the inner green box when all three are trending upwards together. The window of opportunity is now.

The second is Poland. This next solar cycle, from circa 2013 to circa 2025, is one where all three measures are rising. That makes Poland a likely secular bull market in that period.

And the last for today is Russia. The positive alignment runs from around 2015 to 2025 for a decade. 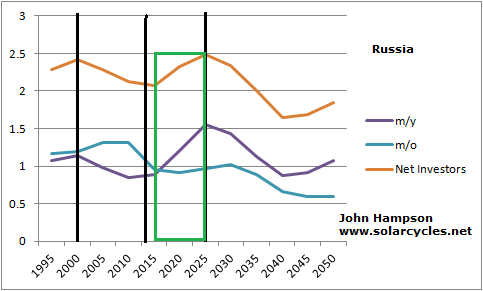 Russian stocks are still very cheap, at p/e 5.6 and paying a 4% dividend. If commodities can accelerate once more, as per my prediction, then I believe Russian stocks can mean revert to some degree. The positive demographics just ahead also suggest that if the trade does not come good quickly that it should with time.

So my trade for today has been to add to (and average down a little) JPM Russia. The lunar positive period, the expectation that commodities will outperform, plus the picture just outlined.