Russian stocks are currently very cheap. Firstly, they are the cheapest by p/e around the world in the table below (cheaper than when I last drew attention to them here), whilst paying a 4.5% yield:

Plus thirdly, they are on a price-to-book ratio of just 0.68 (data as at 1st March). Anything less than 1 means that a liquidation of the entire index would return more in net assets than the current valuation. Something to bear in mind when considering how much lower they could yet fall.

Generally speaking historically, stock indices have been a buy when p/es have reached sub 10 and p/bs sub 1.5, i.e. they have returned consistently well when purchasing at these levels. So what’s up with Russian stocks that sees them languishing at extreme cheap valuations? Why haven’t buyers stepped in?

There are some ongoing broad issues with investing in Russia, such as a lack of political transparency, a corruption problem, and demographic issues. These collectively give Russia a risk premium, that can lead to cheaper ‘normal’ valuations. We can see this in the next chart, showing p/e trends over recent years for certain emerging markets – Russia has largely traded at cheaper levels to the others. It broke sub p/e 5 at the bottom of both of the last two cyclical bears, but the current valuation has not been beaten aside of these.

Compared to the other three members of the BRIC emerging group (of which China also has political and demographic challenges), the economic position in Russia stands up fairly well, with low debt to GDP and unemployment, yet it trades at a 50% discount or more:

Russia experienced a recession around the financial crisis of 2008 but has since maintained positive growth. That growth however is at a lower level to pre-2008, as shown: 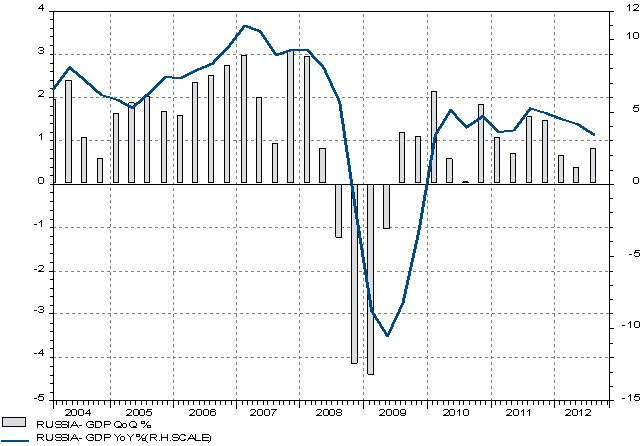 One reason for this lower growth has been energy prices. Energy contributes up to 25% of GDP and 65% of exports. It is the largest producer and exporter of oil in the world, and has the largest reserves and is the largest exporter of natural gas. Up to and into 2008, energy was ‘hot’ and Russia benefited accordingly. Whereas since 2008, natural gas prices have tumbled, and in the last two years oil prices have largely tracked sideways.

In the next chart it can be seen that the Russian stock index has a close correlation with the oil price, up to a 0.9 correlation. 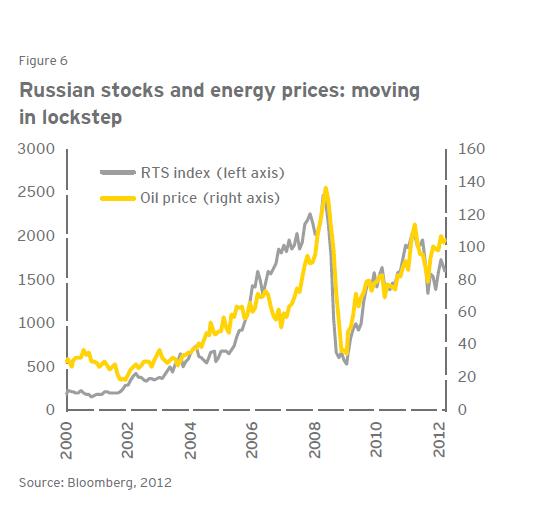 Three companies dominate the RTS and MICEX stock indices: Gazprom, Lukoil and Sberbank, of which the first two relate to energy. Therefore, both by economic weighting and stock index weighting, Russia is an energy play, and a key question is, therefore, where are energy prices headed? To partially answer that, let me also show the association in oil demand and oil price to GDP in both USA and China: 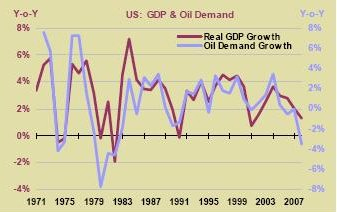 Global economic growth is a key driver of energy prices, and therefore expectations in growth become important to the performance of the Russian stock indices. In fact, Russia is regarded as a high beta bet on global growth. As growth spurts have been weak and short-lived over the last 3 years, Russian stocks have been sensitive to that growth ‘not sticking’.

Since mid-2012, however, we have seen a fairly sustained pick up in growth and this picture still persists in leading indicators today. Has the secular cycle rinsing process combined with sustained central bank supportive actions finally produced a new cycle in growth? It is normal for there to be a growthflationary finale to the current cyclical stocks bull and secular/solar cycling, bringing about a tightening in yields and potentially rates, so I see this as very much possible at this stage.

The action in crude oil over the last two weeks also suggests belief in some sustained global growth here, as it has accelerated on good momentum to a point of potential breakout. It outperformed stocks in this period and in the chart below we can see that the Russian Micex index got left behind:

This is evidence that they do not move lock-step, and another glance at the RTS and Crude Oil longer term price correlation chart reveals that there are occasional periods where one can outperform the other. After all, both the Russian economy and the Russian stock index are not just about energy. So with that in mind, let’s take a look at leading indicators for the Russian economy as they stand currently:

A pick up in the Russian economy, seen here, is in line with the general global picture, and confirms that Russia is not an outlier to be avoided.

Additionally, natural gas prices have been making a potential bottom, with a reclaim of $4 last week adding to that positive technical picture.

A technical advance in gas and oil prices, together with maintained positive leading indicators of growth, ought to drag up the Russian stock index. This is also a seasonally positive time for both oil and gas, with prices typically historically on the rise over the next couple of months.

If we are unsure about the prospects for global growth or momentum in energy prices, then there may still be a mean reversion opportunity here: Russian stocks could play catch up with the oil price rises of the last two weeks, and/or pull a little away from extreme cheap valuation as investors look for value. As an additional consideration, what would happen to Russian stocks under the competing scenarios of a secular commodities finale ahead versus a secular commodities bull over and a new secular stocks bull underway? I suggest that under the former they would be a late outperforming index due to the energy correlation, and under the latter they would suffer from any sharp falls in energy prices but ultimately their cheapness and momentum in global stocks would drag them higher (a rising tide lifts all boats) eventually. Under both scenarios such developments could take time, as patience is often needed for value plays.

Finally, this is a higher risk opportunity – Russia is not the most investment-friendly country, and is more at risk from an ‘event’. That said, it is the 9th largest economy in the world and as such a key player in the global scene.

OK, I have opened a long trade in Russian stocks today. The timing of this is also not far from the start of the lunar positive period, which provides an additional potential support for the trade. I am open on the timescale involved in this trade, as it could be a swift gainer or a longer term play of patience.