Today’s exercise is a 3-way cross reference between price-book valuation (p/b), price-earnings valuation (p/e) and cyclically-adjusted price-earnings (CAPE) valuation of stock indices around the globe. I believe we are in a gradual process of transition from a secular stocks bear to a secular stocks bull globally, with the nominal low already achieved in 2009 and the momentum ‘go’ point likely 18 months hence or so. I am on the look out for timely points to invest in stock indices that reach p/es/CAPEs sub 10 and p/bs of around 1 or lower, as these mark secular extreme low valuations.

The first table is a list of some of the main country p/b ratios, as at the end of October 2012. Green – cheap, red – expensive.

The second table contains a more comprehensive list of countries, this time valued by CAPE as at the end of October 2012. They are in order of valuation from green/cheap to red/expensive.

And the last table is right up to date as of the end of yesterday, showing countries valued by regular p/e and also by the yield of the country’s index. Peer at this to spot green markers against cheap countries and red against more expensive. It should be noted that because we are reaching towards the end of a global stocks bear market, there are very few countries that are truly expensive, as the historic average p/e is around 15-16. 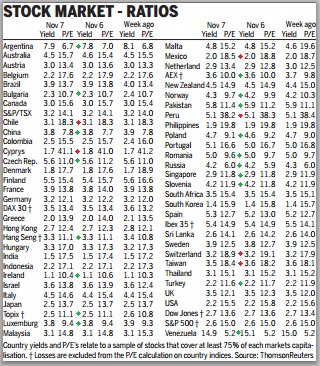 What are the main takeaways, when cross referencing?

Pawel mentioned Turkey. It is cheap by p/e and cheap by p/b (though less so by CAPE), and this is after rising 40% over the last 12 months. Japan, particularly the Topix, is also cheap by both (though slightly less so by CAPE). Ireland looks to be the pick of the PIIGS, with a cheap p/e and ultra cheap CAPE (although it is yielding little). But there is one winner, extremely cheap by p/b, CAPE and p/e and yielding 4.2% to boot, and that’s Russia. The Russian stock index is most weighted towards energy, so aside the political risks, the key question is whether you believe energy prices can hold up ‘well enough’ looking into the future. I’ve opened a long position in JPM Russian Securities today.

On the flip side, Cyrpus and Peru are the notable ultra expensive countries, but two other countries stand out because of being relatively expensive to the others by all 3 measures above, and that is India and the USA. I continue to await the forthcoming rally in equities – which should occur whether this is a topping process or a bullish continuation, and if evidence grows for a cyclical bull top, I would look to exit my SP500 stock indices positions.