The Bali experience has left me with a bit of a conundrum: where is going to be as good as that?! Travel is a personal thing, but you can perhaps relate at least in part to my take on an idyll: safe, friendly, rich in culture, beautiful nature, beautiful man-made, great climate, and a cheap cost of living for a bonus. Bali delivered on all fronts.

Bali is peculiar to Indonesia because it is Hindu, rather than Muslim, and the Bali form of Hinduism permeates everything here (95% of residents follow). Tiny offerings and statues of gods everywhere, at least three temples per village and in every building a shrine. 500 new shrines and temples are built every month – the religion is as current as it ever was, with the youth fully involved. A tremendous amount of rituals and ceremonies means the Balinese are often seen in traditional dress, with flowers a key part of the look and the offerings. The extension of Hindusim into Balinese behaviour is ‘ritualised self-control’, which in practice means modesty and restraint. In short, the religion is all-involving.

The religion merges into the culture as their religious devotion is echoed in their devotion to arts and crafts (on a large scale) and to architecture. The architectural themes of gated entrances, pavillions, water features, and of course shrines and statues have been studiously reflected in the hotels and villas on the island, giving the whole island a consistent feel, and beauty. The man-made beauty across the island is all the more impressive given that existence here is tough for many. Tourism now accounts for 80% of the island’s income, but 80% of Balinese still work in agriculture. Working in tourism pays little, working in agriculture less. Hence, it is not uncommon for parents to sell a rice field and send their kids to tourism school. Labour is cheap here – you could live here and have a maid, cook and driver all for $200 a month.

Despite the meagre earnings, the Balinese are a happy people and could not be more friendly. It’s not possible to be a faceless person on the island – all are involved, and this extends to tourists. Tourism has clearly had an impact on the island, but not in the kind of ruinous way whereby the original reasons for coming are slowly devoured. There is no problematic friction between locals and tourists (on which note, the Bali bombings were carried out by a Muslim terrorist group), and the Bali culture remains strong and dominant, rather than diluted and then packaged up for visitors in a less authentic way. To complete the picture, the nature is lush green, with tiers of paddy fields amongst the palms, and there are beautiful beaches, wild chickens and lizards galore.

Negatives? There are quite a lot of ill looking dogs around. The Balinese largely consider them scavengers in league with evil spirits, and as a result they have a difficult existence. There is a caste system, in line with Hinduism elsewhere, meaning not all are equal. You will see swastika symbols – but this is nothing sinister, in fact it means in harmony with the universe and precedes Nazism. And of course, as with anywhere that might be considered idyllic, greed naturally steps in, and some long-time visitors to Bali bemoan this. There are a few opportunists in the most touristy south (often coming over from neighbouring Java), big luxury hotel resorts have edged out old backpacker Bali, and Jakarta has taken its slice through shortening visas and applying a departure tax. As a first time visitor, I would say this: the mature Bali remains very attractive: crime remains very low, trust and friendliness reign, and the beauty and culture of the island rival anywhere I have been.

The majority of visitors to Indonesia go to Bali and Bali alone. On my current trip, that is also the limit of my dip into the 4th most populous nation on Earth too. So I will leave this post as a little Bali travel summary and not attempt a wider analysis of Indonesia and its markets. Some pics to finish then:

There is no limit to what a motorcycle can carry here.

My wife gets a head massage. 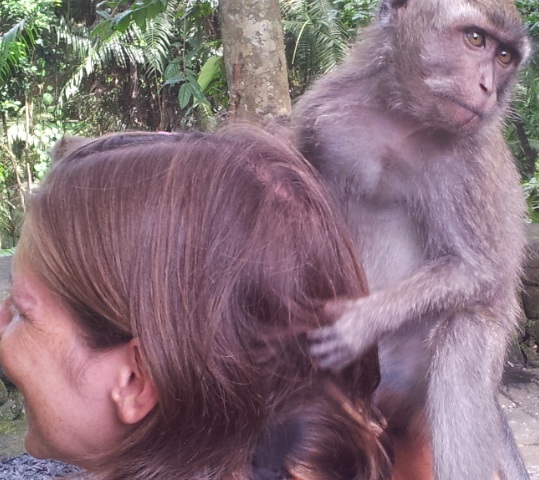 My son relaxes at the beach.