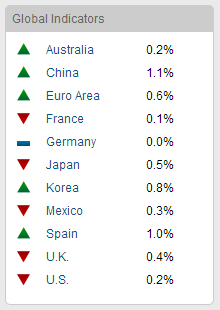 I’ve suffered poor internet access this week, but have it now, so let me catch up on developments since last Friday. I will respond to comments and emails in due course, but first, analysis.

Conference Board leading indicator updates have been mixed. USA, France and Mexico slipped negative. Germany improved to flat and the general Euro area jumped into the positive. Australia also moved into the positive and China put in another good month. The summary table currently looks like this.

So a continued picture of mixed fortunes, but with a rotation in leaders, and overall a picture of weak growth ahead, rather than recession. ECRI leading indicators for the US advanced from 3.5 to 4.4 last week and US economic surprises have picked up again the last couple of weeks:

Euro debt, which bothered the markets from mid-2011 to mid-2012, has deflated as an issue, to much more benign levels.

The Dow theory divergence of mid-year, which was a potentially bearish signal, has been resolved, with Transports since resuming strength: 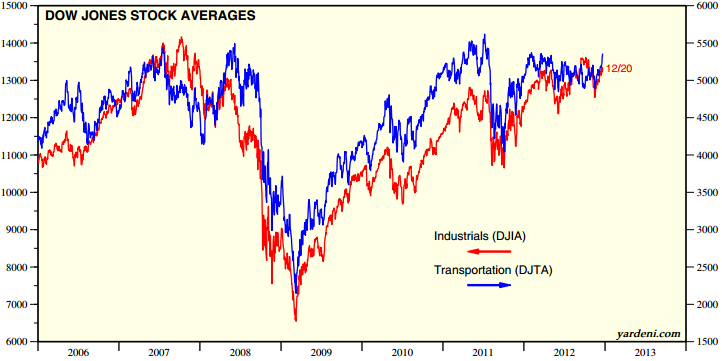 And cyclical stocks in the US continue to perform strongly, with breadth also healthy.

However, sentiment for US stocks has reached into frothy bullish territory in both NAIIM and AAII surveys:

Meanwhile, the Shanghai Composite has pulled up in a more compelling bottoming fashion, as the drop beneath shown support now looks like a fake out.

Treasuries have declined and yields have added credibility to a W-bottom: 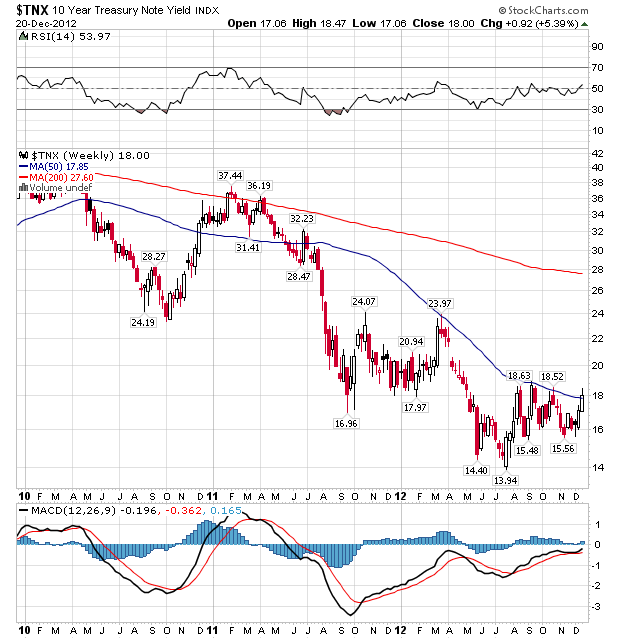 Copper remains in a triangle, unprepared to give a diagnosis on the global economy at this point: 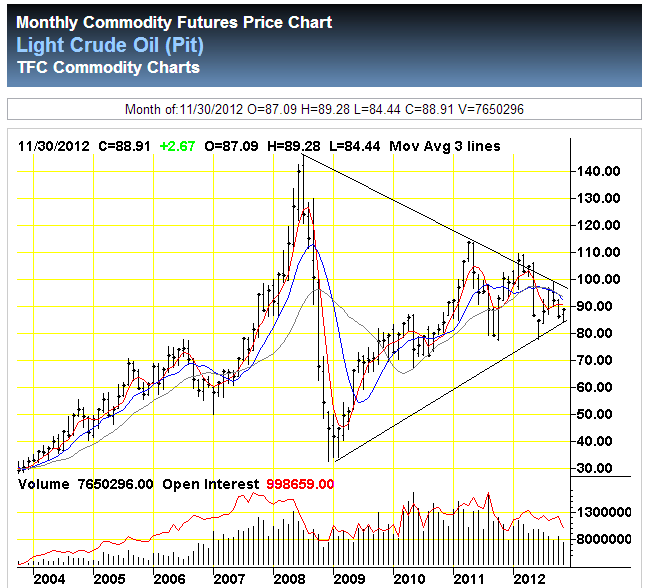 November’s global climate stats from NOAA came in at the 6th hottest on record, making the year to date (minus December) the 5th hottest on land since records began. That’s a continued support for agri longs, as extreme conditions persist. Yet, soft commodities are, as measured by a broad agri commodities ETF, just range trading of late. Despite China’s improving fundamentals, and the Euro strengthening against the US dollar (USD technically weak formation shown below), commodities as a whole are failing to ignite currently.

The most surprising underperformer is gold, which currently looks like this:

It just dipped beneath the 200 MA, which has largely supported the secular bull since 2000. Is that a worrying development? It’s not great, but it is doing so on oversold RSI and a daily sentiment index reading of sub 10. Furthermore, gold miners have reached a bearish extreme in public sentiment. I still suggest that gold broke upwards out of its 11 month consolidation in August this year and has resumed its uptrend, albeit tentatively at this point. Gold seasonals, solar/secular history and negative real interest rates all support gold bouncing here and making that tentative renewed uptrend more concrete, but once again it is finely poised. I am happy with my exposure both to precious metals and to miners, but if i were underexposed I would choose now to buy both, based on the reasons I have aggregated here. In other words, I believe gold will bounce here and reclaim its 200MA (with the weak hands shaken out).

Today is the Mayan apocalypse, the Mayan hinge point, a miscalculation, or a falsehood. Tomorrow is a Bradley turn, which would mean today (due to market opening days). I do not buy in to the Mayan blogosphere phenomenon, and have found Bradley turns more miss than hit, but that said we do have some drama today, with fiscal cliff nerves helping bring about a big sell off this morning which at the time of writing has been semi-reversed. I place more weight on lunar cycles, and next week’s full moon typically spells downward pressure into it. However, this is balanced by positive seasonality which goes hand in hand with favourable geomagnetism at this time of year – the updated model shows an uptrend into early January:

It’s the morning session in Europe at the time of writing, and I don’t pretend to know how today is going to turn out, given the dramatic market action in the early hours. However, my stance is to stay put on my pro-risk portfolio currently. 1. Weakness in precious metals, 2. indecision in copper and oil, 3. frothy sentiment in US stocks, and 4. complacency in risk aversion, are all current flags. But I would contrast with: 1. oversold and overbearish readings in precious metals and miners, 2. improvement in China, leading indicators and renewed dollar breakdown, 3. good breadth and cyclicals performance, better technicals in European and Asian stock indices, and 4. money pulling out of treasuries which should seek out pro-risk assets (by solar/secular/cyclical history). Broken down into my 3 areas on involvement: I don’t want to exit stock indices longs yet because we do not yet see sufficient congregation of cyclical bull market top indicators; I do not want to exit commodity longs yet because I maintain by solar/secular history the parabolic peak is to come 2013/2014; and I do not want to exit treasury shorts yet because I believe a new secular bear market in treasuries is getting underway and a rise in yields (of some note) should be one feature of the end of the cyclical stocks bull.

Next week is usually a quiet week in the markets globally, due to Xmas, but there is the fiscal cliff deadline at the turn of the year, and so this period could be more volatile. My expectation is that agreement will be reached to prevent the fiscal cliff, and that markets will enjoy a relief rally when that occurs. However, there are no guarantees, so let’s see how things unfold. Next week I will be in Bangkok.