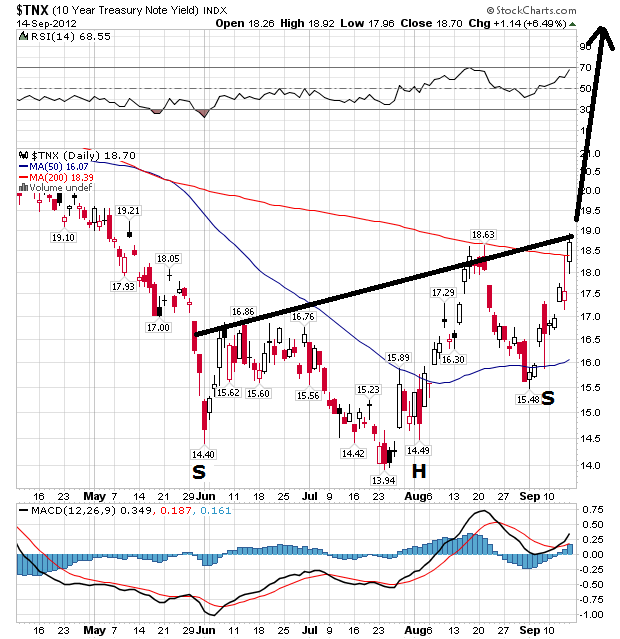 2. Both the Euro and the Dollar are at S/R that could make for a near term reversal:

3. New highs / new lows for the US stock market hit a record high. This could signal a near term reversal, but the implied rally breadth has historically meant continued bullishness subsequent to that, more often than not. 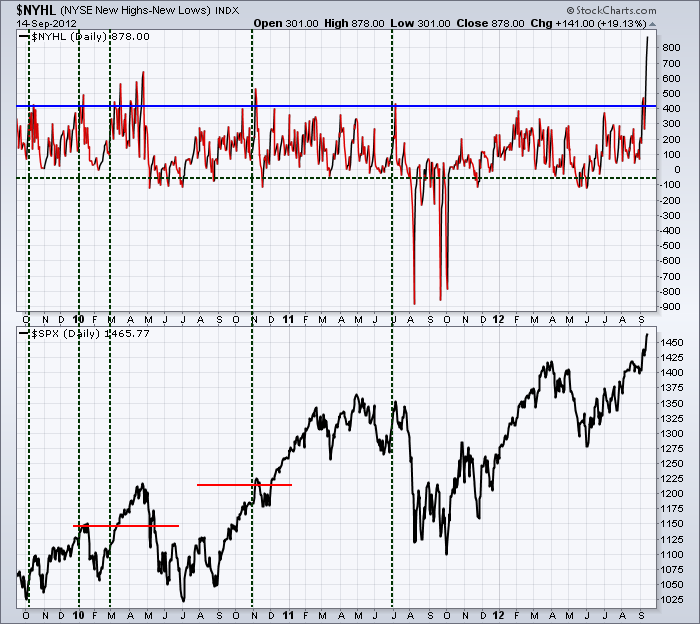 4. SP500 stocks above the 50MA have reached +1 standard deviation, but historically this indicator has usually oscillated in that range for a period before stocks topped.

5. SP500 bullish percent over put/call ratio has reached the 110+ extreme zone. Again, this indicator has usually gone on to oscillate in this zone for a period before stocks topped.

Sentimentrader’s indicators now show 40% in the extreme (bearish for stocks) – the highest percentage since January 2011. However, in their own words, with price at new highs this would be a concern if price action became toppy. It is a sign of a strong uptrend, but with near term reversal potential if price signals.

I don’t see price at this point looking toppy. Friday’s session was mixed for stocks, making a gain that finished in the middle of the day’s range. That’s fairly normal after a big up day on Thursday. The Nasdaq and SP500 have spent a week above their breakout, having successfully backtested it, which is bullish. The Hang Seng and Russell 2000 just broke out on Thursday/Friday. Unless price is reversed Monday/Tuesday then this is also bullish. Dow Transports have held above their triangle breakout, having a reversed a fakeout out of the bottom. Stocks breadth has led price, which is bullish. Chinese stocks are attempting a bottoming formation after reaching a Demark selling exhaustion count.

Demark’s last quoted price target for the SP500 is 1478. We didn’t get there yet. I believe stocks can push up a little higher early this coming week, giving a bit more room for the latest breaking out indices to subsequently consolidate above their breakout S/Rs. I respect the overbought/overbullish indicators that we are seeing and am alert to a correction soon, particularly when drawing in the Euro and dollar S/R positions and precious metals overbought/overbullish readings, but currently the evidence is for a consolidation in a continued bullish uptrend. So my approach is to maintain long positions through any correction, until evidence changes.

6. Coffee has a speculator net short position at a 7 year high. Here is the monthly price chart, and the weekly chart which shows a dynamic W bottom is being made. I am going to consider adding to my coffee position on Monday: