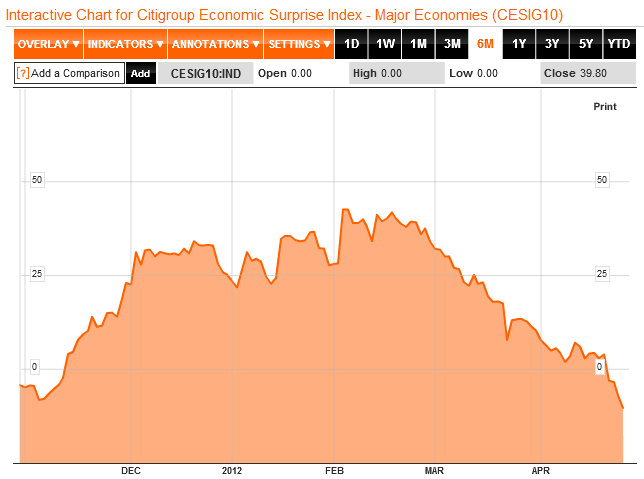 The US dollar appears to be on the verge of breaking down, but it isn’t a done deal yet. 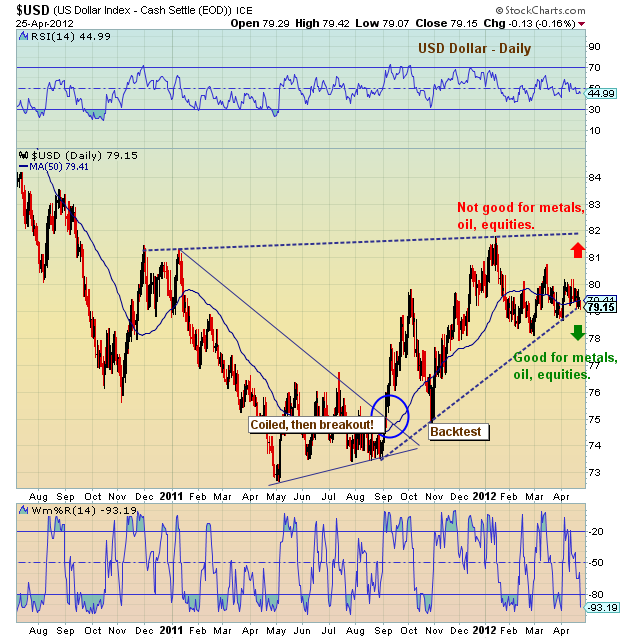 The Chinese stock index is on the cusp of a breakout. A Shangai breakout and a dollar breakdown would really give commodities some acceleration. However, no China break out either as yet, and a reversal into the triangle is possible.

AAII bullish sentiment has really washed out, which is supportive for US stocks. 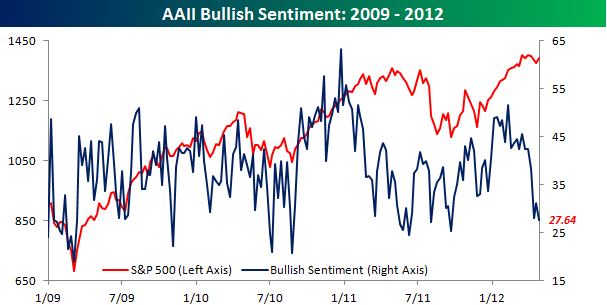 European stocks are underperforming, and Euro debt continues to weigh. Spanish CDSs have eased a little, but only to just below record highs. I expect them to come again.

Geomagnetism appears to have ebbed today, but 4 days of disturbance has tipped the model projection over to a slightly downwards bias, with particular downward pressure into next weekend’s full moon.

We have US earnings exceeding, a washout in bullish sentiment, and a double bottom on the S&P500 at the backtest of the 2011 old highs, together with a lack of major topping indicators at the 2012 highs, all supportive of further upside for stocks. Then we have collapsing economic surprises, Euro debt, and geomagnetism all exerting downward pressure. And we have the US dollar index and Chinese stock index both at crunch points.

The combination of excessive pessimism in multiple commodities, higher sunspots which should encourage commodity speculation, and lagging in both Euro and Shanghai correlations as shown below, makes it likely commodities are about to perform.

If commodities are about to perform, then a breakdown in the US dollar and a breakup in China stocks would make sense, and those developments should in turn pull up equities too. But as yet we remain in the balance, and if we get movement the other way in the dollar/China, due to Economic Surprises, Euro debt, and/or geomagnetism/full moon then it may mean a little more time is needed. But to reiterate my expectations drawing together previous solar maximum / secular commodity conclusions, commodities should start to outfperform whilst stocks track overall sideways with volatility. I remain lightly long stocks and heavily long commodities.

On a personal note, Spring is here in the UK, and the outdoor pursuits are calling. I have a list of research threads to look into related to trading and the markets, some provided by readers, some of my own sourcing, but I expect to address them in the next off-season, towards the end of 2012. I fully intend to maintain posting and analysis several times a week, but additional deeper, original pieces of research are on hold for now, so if you put a suggestion my way, it’s on my off-season to-do list. The UK good weather season isn’t as long as some others, so time to make the most of it.

24 thoughts on “In The Balance”