We can now see that the arching over in price in 2015 set against negative divergences in breadth and strength were indeed a prelude to a collapse in stocks like in 2011: 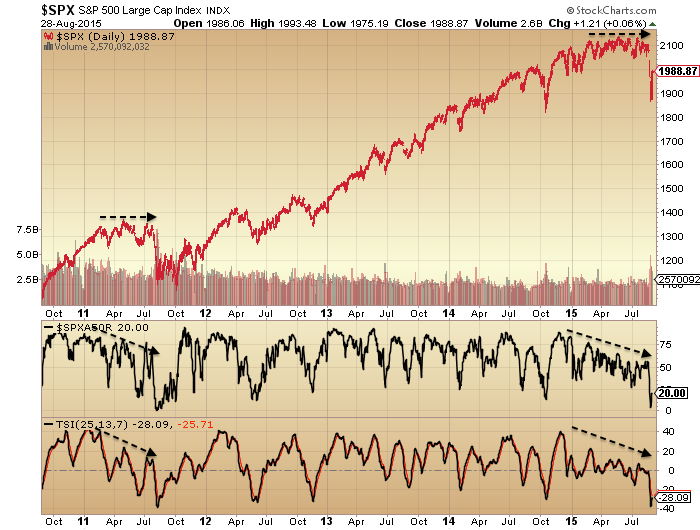 After such a steep collapse and catapult readings in fear indicators, the market historically needs some time to consolidate and recover. The pattern should be that the rally of the last 3 days gives way imminently and we retest the lows.

That point would then be the next key test.

Bulls should be looking to see a double bottom or lower low on positive divergences from which price then resumes a bull trend to new highs. The best fit timeline by geomagnetism/seasonals would be a bottoming out in October and Xmas new highs. Supporting this scenario is liquidity trends. 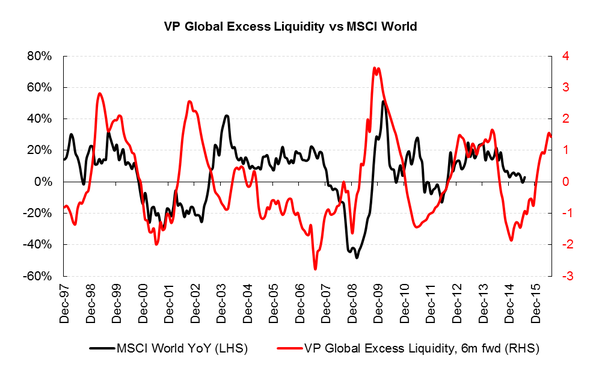 However, I rather see the overall evidence as supportive of stocks now being in a bear market. Drawing together all the indicators and disciplines that I trust, the data suggests stocks entered a topping process Jan 2014, made a first major peak in June/July 2014 with the solar max, made a first major low in October 2014 and a final second peak in May 2015. Several indicators reflect this progression, so here is one: stocks to bonds.

Multiple indictors have registered bear-market-bottoms readings over recent months. Here’s another one from Dana Lyons:

Capilulative breadth too, which hit its highest ever reading last week.

If we take the bull angle again, then we could argue that such readings are a springboard to much higher prices, but we need to explain why they have anomalously occurred at <10% from the highs. If buybacks were to blame for the shallower washout in nominal prices then we should have seen small caps and non-buyback large caps collapse whilst buyback large caps held up, but this has not been the case.

If, on the other hand, they are signals that we are in a bear market then prices should now fall again Sept-Oct and make significantly lower lows. The shaping in Biotech is supportive of this:

All in all, I think the extreme bearish readings we are printing this year in various indicators are a fair match for the all time record bullish readings we saw last year, namely that the markets have become excessively unbalanced.

But, what can we can say for sure is that multiple indicators that were screaming for a reset in equity prices have now been satisfied (such as breadth, sentiment divergences), which makes the next move particularly telling. Again, bulls see this as a refuel for eventual higher prices, but certain big picture indicators make any such notion that we have now reset rather foundation-less.

Valuations ought to end up negative, and leverage ought to be wound down from their extreme high readings:

Which brings us to our particular environment not seen in over 50 years: ultra low rates, low inflation and overall deflationary trends. Are such valuations and leverage fair in the context of ZIRP? It’s a really useful test. If stocks are in a bear now and break down, then it will be without high rates or oil prices ‘choking the economy’ and despite QE ongoing in several major nations. It will be clearer that valuations do not need recalculating in the context of low rates and low inflation. In short, it will be much more supportive of my dumb model of the markets: demographics and solar cycles.

On that note, what I see as most important here is what has been offsetting demographic trends, namely increasing leverage. Buybacks through borrowing continue, but did so at record levels in 2007 despite stocks breaking down into a bear. Buybacks didn’t stop the collapse occurring last week. Margin debt dropped in July, and likely dropped harder in August. If stocks are to rally to new highs then leverage has to recover and make new highs too. However, what I see as likely is that a section of high leverage participants were wiped out last week and all-round appetite for high borrowing levels has been dealt a decisive blow. I very much doubt from here that leverage will make new highs.

Using Rydex as a proxy for retail, I would argue the craziness has been broken and we will now see a gradual reversion to mean.

Looking cross-asset, I believe gold will now make a higher low than the July low and in so doing cement its new bull trend, completing the gold and equities flip at the cyclical level.

To finish, here is the SP500 big picture again. If we are in a bear then we should make lower highs and lower lows. But note that in a bear we still get some ripping rallies that test the overall downtrend.

For now then, what’s important is that the rally of the last 3 days topples over in due course and eventually prints a lower low than October 2014 in all indices.

We have had significant geomagnetism in progress the last couple of days. It adds to the recent cluster which acts as a negative pressure on market participants.