Earnings season continues. So far from those who have reported, EPS growth in Q3 is 5%. I remind you that the projection for this quarter was 12% at the start of the year, down to 9% by mid-year and most recently cut to around 5%. To justify equity valuations, earnings growth needs to come in at over 10% each quarter. Q1 came in at 2.2% and Q2 at 7.7%. If we stay at around 5% this quarter, then average earnings growth this year is less than half that required. In fact, this has been the theme for 2.5 years: price front-running a return to solid earnings that has not materialised. Consequently, valuations are at the historic extreme, and the pending repair in price I believe is now underway. When this occurred in 1937, the repair took 8 weeks post-solar-maximum and dropped equities by 38%. Up the stairs, down the elevator, both ways assisted by the sun’s influence.

The sentiment drags continue. 1. We are (very likely) in the post-solar-maximum hangover, 2. October is the geomagnetic seasonal low, and 3. There is a period of actual geomagnetic disturbance predicted right ahead: 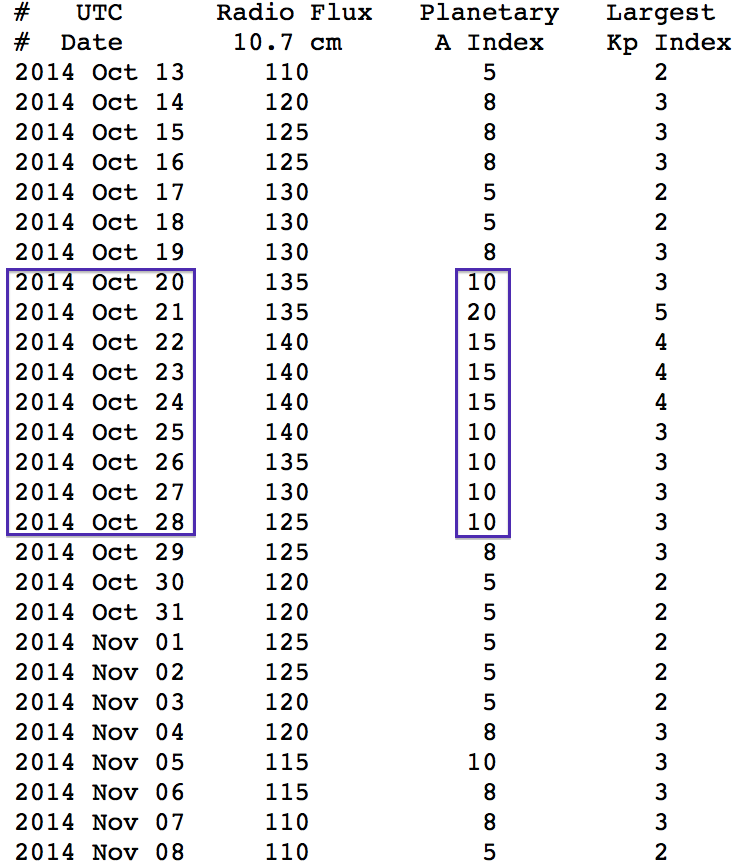 It is the new moon on Thursday 23rd. After that we add the 4th pull on sentiment into the mix: the lunar negative fortnight into the full moon.  I remind you that 6 of the 10 biggest Dow down days in history occurred in the window now and right ahead:

In addition to our positioning in that worst window for sentiment, the other conditions for such a repeat crash are in place:

2. A long period of price mania: levitation with no meaningful correction

3. Extreme leverage that historically unwinds in a disorderly manner

In the last couple of weeks we saw the technical price breaks: the Russell 2000 breaking down from its 2014 range and the SP500 making a lower low beneath its 200MA. However, by mid-last-week we saw some washout in indicators from which a relief rally in price erupted into Friday’s close. However, I believe this will be short-lived.

Rob Hannah’s capitulative breadth hit a dizzy 19 but dropped to 4 by the end of the week. Sub 3 is neutralised, so we have a potential set-up for this to occur at the beginning of this coming week. I refer you back to last week’s posts as to why the correction into last Wednesday is unlikely to be a v-bounce and we should at least re-test the lows on positive divergences in the most bullish scenario. Further supporting this idea, we see selling climaxes spiked last week, but as per 2011, this ought to be just the first spike as the market builds out a bottom:

New highs-new lows turned negative, other historic instances shown below. Another price low ahead is the most likely.

The 1929 analog not only won’t die but looks at its most potent here, as not only the topping pattern but the dates match up very well (the crash coming at the seasonal sentiment weak spot):

If we zoom in on the second chance we can see it amounted to just several days of relief rally.

This is just a guide as to how the waves could play out, given the similar conditions of valuations, leverage, seasonal and technical breaks, but it’s not unreasonable for it to play out that way forward too:

What I suggest could occur is a little more upside at the start of this coming week (CBI neutralisation), followed by a move back down towards the lows of last Wednesday (which can be slightly higher or lower), aided by the forecast geomagnetism and in line with typical stabilisation basing patterns (10% corrections are typically not v-bounces, and typically involve Trin spikes and positive divergences before rallying – both missing so far). If a true low is to form there, then we should see positive divergences in indicators and more evidence of washout or capitulation. That would then provide a firm base for a rally. However, if we see no positive divergences or capitulation evidence then we should break lower, and that removal-of-doubt in buy-the-dip potential ought to be the catalyst for the panic selling.

The period at the end of October into the full moon of November 6th would be the most appropriate window for this to occur: negative lunar fortnight, geomagnetic seasonal low, post-actual-geomagnetism, and of course post-solar-maximum. After that we have a window into year-end in which seasonal geomagnetism provides tailwinds for the market.

I remind you that certain indicators have a long way to go before we could argue for capitulation and washout. Indicators such as Investors Intelligence, asset allocations, valuation measures and leverage measures. A large magnitude drop would be necessary to correct these imbalances. I also remind you that we are now (very probably) in the period post-solar-maximum whereby the preceding mania turns into the resulting crash (Nasdaq in 2000, Nikkei in 1990, gold in 1980). A crash was the norm in the last 3 solar cycles, not the exception. It may be index-specific, but so far no index has crashed.

The most likely candidate for the heaviest falls remains the Russell 2000, I believe. A 14 year outperformance versus large caps, climbing to a mania into the 2014 solar maximum to its most expensive ever valuation and a p/e of over 100.

It has broken down from a likely topping formation and is now attempting a backtest of the breakdown. A repel here should cement the new bear market, and generate the major sell-off. Invalidation of my case would be a break back up into the 2014 price range.