No panic selling follow-through from Friday in the Asia and Europe sessions yesterday but weakness hit late in the US, producing the third consecutive >1% down day, taking the SP500 7% down from its peak, and strengthening the steepening down trend. It keeps us on track for tipping into the panic selling, per the analogs, unless the bulls can stop the rot and generate a relief rally, so let’s see how the indicators stand.

It has been a long time since three consecutive >1% down days, last seen in 2010, and mainly associated with bear market action:

The SP500 sliced through the 200MA with little resistance. The positive divergence on the RSI has been negated with yesterday’s move. 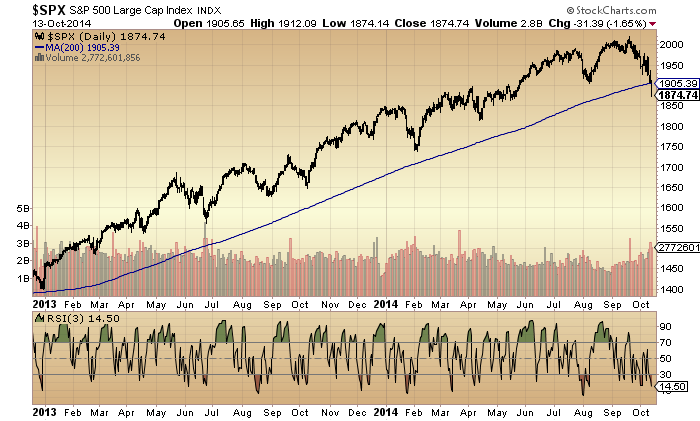 CPC put call ratio hit the 4th highest in its history. Other such instances shown below and they weren’t great markers of lows:

In fact they were generally associated with negative returns on all timescales:

However, capitulative breadth hit 12, which is a washout level. Historical returns shown below:

Trin, Nymo and Tick did not make extremes yesterday:

Year to date sector performance looks like this after yesterday:

All year the top two sectors that are associated with post-market-peak outperformance have been signalling a top, but now their relative performance is much clearer to see.

In summary, the arching-over formation and the increasing bear pressure on the stock indices looks very similar to the waterfall decline analogs (see last post) pre-collapse. With all the major indices now having broken through their key support levels, the bulls need to step in fast to prevent a crash. The CBI washout is on their side, but there may well be further selling (drawdown) before the bounce, if it works again. Other indicators are not at this point showing obvious exhaustion. Therefore, some more selling, to align indicators at contrarian bullish readings, seems the most likely, and a voluminous major distribution day, perhaps that ends as a hammer candle (intraday reversal), would further increase the odds of a bottom, if it is to come.

The question is whether some further selling here can be fairly measured and contained, or whether it would quickly spiral out of control to become a major crash day (or days), given the large imbalances in the market (leverage, bullishness, complacency, etc). Either way, I think the situation is looking fairly black and white now. Either we are cascading into panic-selling, per the historical analogs, and, having broken the key supports, that should now happen very quickly (this week if a collapse, or more sustained selling over several weeks if more like 1937). Or, the bulls can yet generate a relief rally to a second-chance peak (springboarding off that CBI) which should last a couple of weeks or so (drawing on the analogs again), before the market tips over in earnest. Right now the first option has the upper hand (closed at lows, sliced through supports, steepening down trend, a lack of alignment in indicators for exhaustion), so the onus is on the bulls to deliver something today or tomorrow.