Ask 100 analysts and traders what that is, and chances are that not one of them will point to this:

Yet I maintain that this is it. The last 5 solar cycles all produced speculative peaks within 5 months of the smoothed solar maximum, and in this era of global, instant access, it seemed reasonable to expect something similarly tight at this peak, which, in this real time test, appears to be the case. We see evidence that small caps were the main speculative target of this solar max, with the R2K p/e reaching over 100 at the top, like the Nikkei did in 1989 and the Nasdaq in 2000. We won’t know all this for sure for several more months, but with each month that passes the likelihood grows.

So am I delusional, or are other analysts failing? I am open to both possibilities and I mean that sincerely: I am just one self-taught guy, so how come all the veterans in the business aren’t aware of this phenomenon or don’t rate it?

I have doubters amongst you readers too. However, for the chart to be invalidated, we would need to see small caps and leverage make new highs whilst the solar maximum wanes. That would imply the 2014 formation in the R2K is not a topping process but a consolidation or coiling for a move higher. Chances of that are slim: 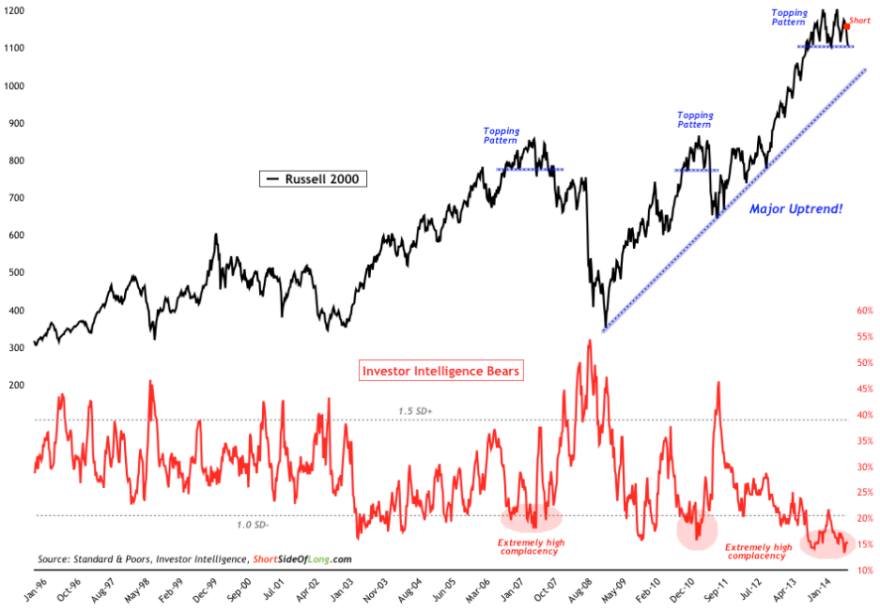 The topping option gains further weight when we look at relative performance to large caps:

Plus, many topping indicators for equities have congregated since the end of 2013, which I have covered exhaustively on this site. And to be clear, if small caps break down then large caps will follow, in line with history.

Going back to the title of this post, I believe the most popular answer amongst analysts for ‘the only chart that matters’ would be the QE versus stocks chart, but in a recent post (here) I instead showed that ‘Fed policy trumps all’ has been the mantra rather than the driver, just as into the year 2000 internet stocks were ‘revalued’ on expectations rather than earnings. In other words, the speculative mania is driven by the influence of the sun but people unwittingly assign some other justification for buying high: a ‘new normal’ which ultimately fails to be.

As stock indices were down for September, we can expect that margin debt retreated in that month, which keeps the leverage peak close to the smoothed solar max. If the R2K can break down decisively here in October – and it is currently at the critical last support – then it would likely seal the joint solar/speculation peak around March time. Should that occur, then the implications are major, namely that much of what is written about the markets is not true, and that humans, including central bank members, are more dumb subjects and less intelligent creatures of free will. But more on these implications once we have the validation seal.

It wasn’t easy trading this in real time, trying to gauge where both the speculation peak and the smoothed solar maximum fell. With both variables unknowable in advance it has been a process of cross-referencing and leaning on prediction probabilities, only made more certain with hindsight. Nonetheless, in trying to gauge the peak in the markets, there appears to have been no more critical factor to consider. However, we now need the decisive breakdown in equities to confirm it.

In the very short term, indicators still point to the bounce Thursday-Monday being short-lived and giving way to a lower low than last week. So, per my last post, this would likely entail the Russell 2000 making a decisive break beneath the last line of support. If this transpires then the selling should gain momentum and that would be the validation seal that I am looking for.

274 thoughts on “The Only Chart That Matters”