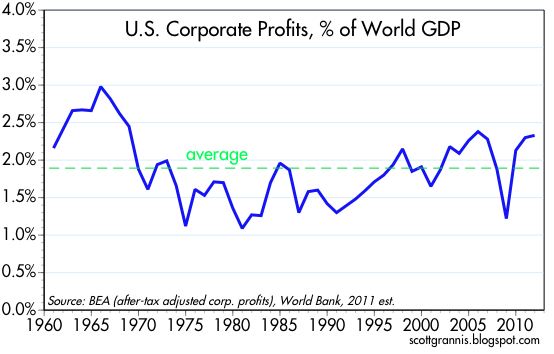 The R/J CRB commodities index now looks very close to the geomagnetism and lunar model in 2012:

It is a closer match than equities so far, which is in contrast to my expectation, as I predicted that commodities would pull away from the model into the solar/secular peak of 2013, whilst stocks would stay with the model. Well, that may still happen, and I believe there is a greater likelihood once sunspots pick up in a sustained way.

Above, we can see that sunspots are starting to trend up again, but we should see them push up higher and longer as we wave our way into the solar peak. That should in turn inspire speculation and inflation.

Scott Grannis has some useful insight into the apparently extreme US corporate profits. This first chart you may recognise, as its the one that suggests mean reversion should be imminent. However, the second shows corporate profits as a percentage of global GDP rather than US GDP, which shows US company profits closer to average. Because companies have globalised and emerging markets have grown faster than the US, the result has been a distortion of the first chart, with the second a more true picture.

Lastly, Tom McClellan uses a model of Euro-dollar net commercial positions advanced by 12 months to predict the stock market (hat tip Gary), in other words, how the big commercials position themselves in this contract is reflected in the stock index a year later. If that sounds unlikely, here is his explanation: ” It may help to understand that the commercial traders of eurodollar futures are typically the big banks, who are using these futures contracts to manage their assets and fund flows.  So what we are seeing in their futures trading are responses to immediate banking liquidity conditions, and those actions give us a glimpse of future liquidity conditions for the stock market.  These liquidity conditions are revealed first in the banking system, and then the liquidity waves travel through the stock market a year later.”

Here it is this week, predicting consolidation in stocks from now into June, and then a rally into US elections in November: 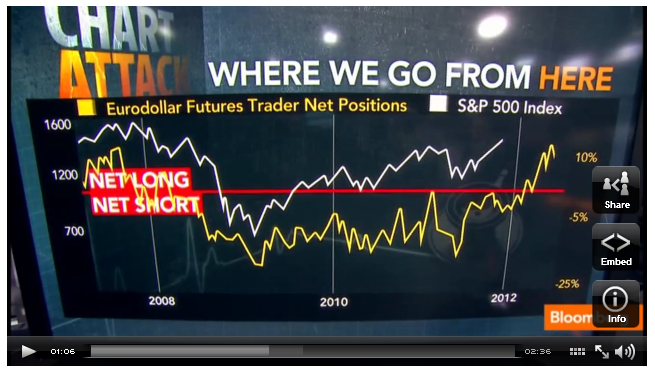