The only exception in the last 20 years was 2011. The 200MA turned downwards, the market was repelled but shortly afterwards bounced again and burst back through.

The SP500 didn’t break out of what could be a large rounded arc top.

Breadth and volatility continue to show long negative divergences like into the 2007 peak.

We can see 2011 wasn’t the same: full breadth into the peak and not the same complacency.

Risk and other major indices are still flagging.

So I still think we are at the equivalent yellow circle, until all these indicators start to behave otherwise. 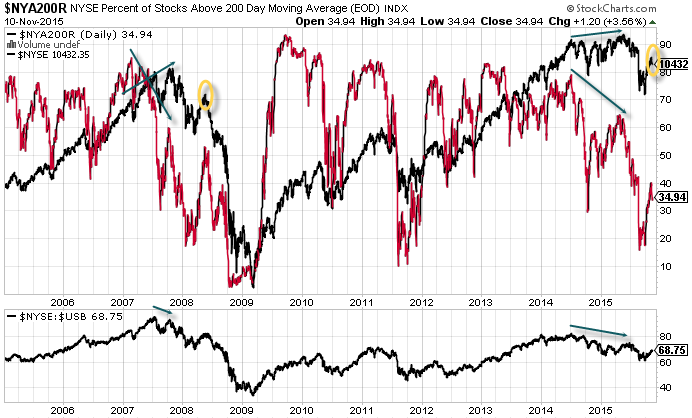 There is still the possibility we just made ‘second chance’ which historically led to a very rapid sell off:

Failing that, then the yellow circle above back in 2008 or a similar point in 2000 saw more back and forth in an overall downtrend. Either way, the key would be that we don’t revisit the early November high again.

The solunar model shows a decline into late November before a bounce.

Of the near term indicators, $CPCE has reached a level that could suggest a bounce here. 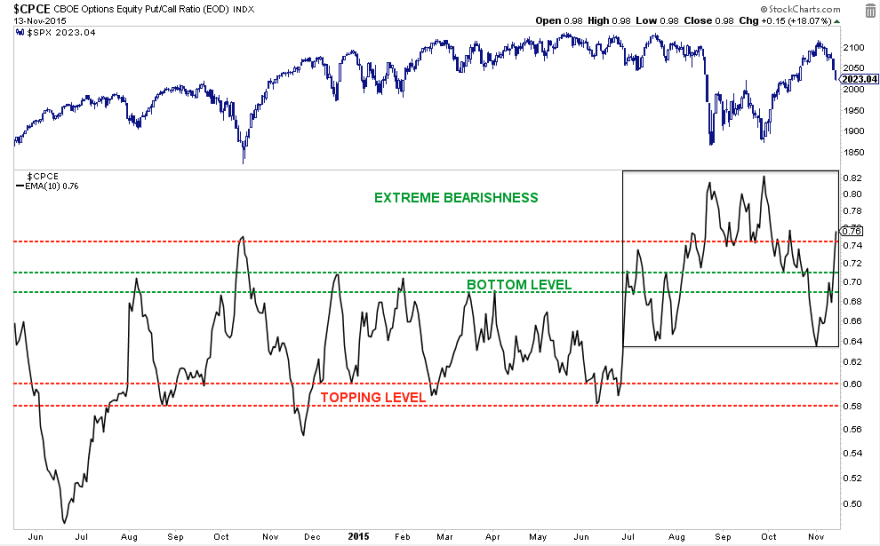 But note how the boxed range shifted higher since July which could mean $CPCE goes higher yet.

Insider action has reverted to the buy zone.

$SKEW remains particularly elevated. It doesn’t have a great track record of calling the outsized move that it is supposed to predict, but again, it may be a clue.

Economic data remains weak but mixed. The overall global situation is fragile, and I maintain just the stock market, with its wealth effect, is keeping disaster at bay – for now.

Then we have a series of anomalies occurring in the financial markets which may collectively spell liquidity troubles. Corporate bond inventories have gone negative, repo rates are fractured, swap spreads have gone negative. These are fairly unprecedented so no-one seems to quite know what they mean, but given the distortions that have built up under ZIRP and QE we shouldn’t be surprised if another systemic crisis was to start to take hold in some area.

Lastly, gold still looks like it may need a final washout low, due to open positioning and put call ratios. My guess is we see the US dollar break out and take off again here, as a bearish development for the overall markets, and gold gets its final sell off in response, before breaking into its new cyclical bull, as equities move decisively into full bear market.