The biggest stock market mania of all time peaked out in March 2000, which was the exact month the smoothed solar max of SC23 peaked. Solar cycle 24 appears to have made its smoothed peak in April 2014, into which we experienced another mania in equities.

Below we see put/call (smart to dumb money variants), allocations (Rydex, as a proxy for the wider market), valuation x2 (real SP500, and relative to bonds) and strength (TSI) all displaying similar behaviour to 2000. What’s interesting is the extremes reached in these indicators have hit levels very close to those reached in 2000, as designated by the horizontal arrows.

And we can add margin debt to GDP for one more: 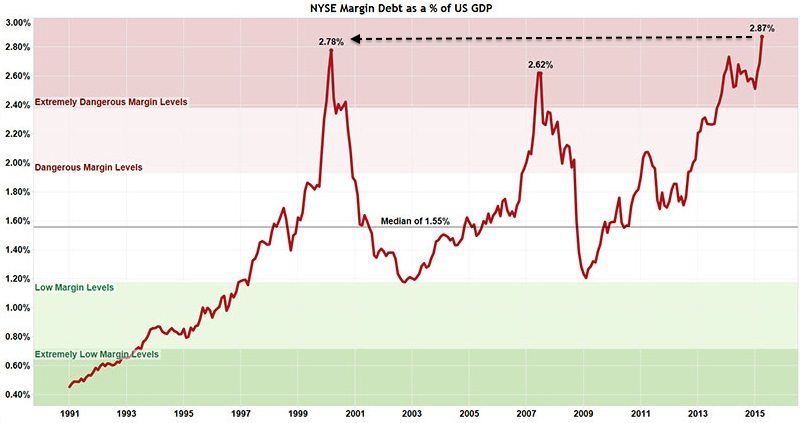 In all the indicators, we see the intermittent 2007 stock market peak printed lower or milder. The difference? No solar max to drive speculation.

In short, various measures and indicators reveal a close mirror of 2000, both in behaviour and level. The question is whether those levels represent ceilings or whether we go on to see all new extremes. So back to the opening comment: 2000 was the biggest stock market mania of all time, and in various ways we are matching it. Wow, no? This is despite a demographic headwind (rather than tailwind into 2000) and despite a weak world economy (versus strong growth into 2000). Can we really go higher?

Timewise, equities are on borrowed time since the solar max of mid-2014. Although nominally they have not topped out, various measures under the hood (see previous posts) reveal a peak back then, and the divergences remain. The TSI divergence back at the SC23 peak lasted from mid-1998 to the top in 2000; the current TSI divergence began in mid-2013, making for a similar duration. Drawing it all together, I maintain the likelihood of a mid-2015 switch into an equities bear and I am staying on the attack.