ECRI leading indicators for the US negative. A combination of oil price drops and US dollar gains adding to sharp earnings projections revisions. On Sept 30th, earnings growth for Q4 was projected to be 8.3% and revenue growth 3.8%, but now these are more than halved to 3.8% and 1.5% respectively.

Currently an island/overthrow top. But now we need follow through. 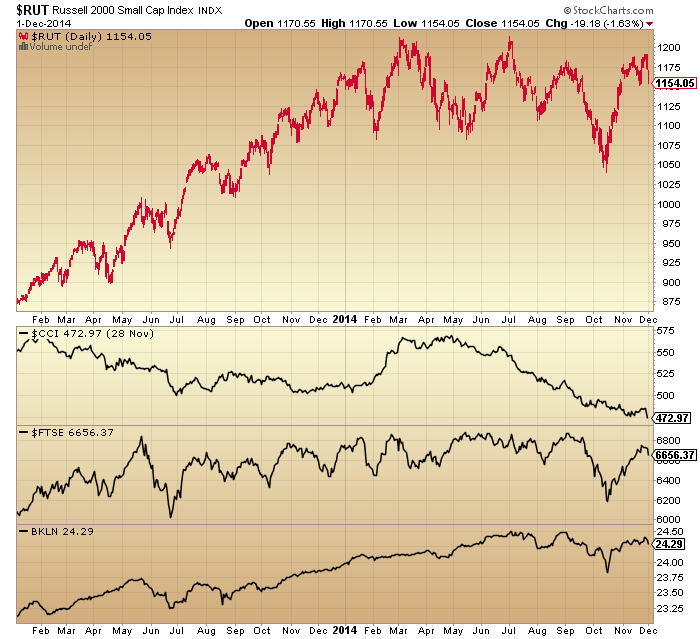 Repelled at a critical point. Same for the FTSE shown underneath. If these indices were to maintain their 2014 topping processes then they couldn’t stretch much further upwards. 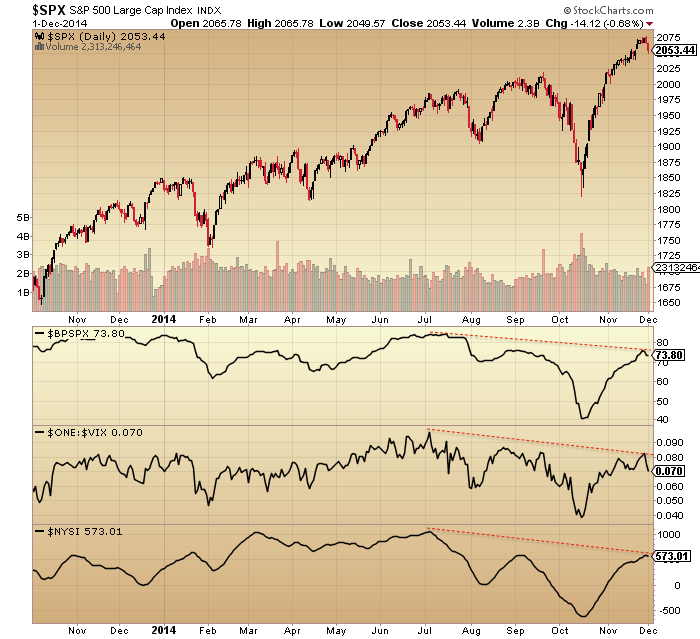 So it seems like indicators and cross-asset developments are turning the tide on equities just at the critical point.

I believe it comes down to how the price process now plays out. As previously noted, we might see a price range play out from here on divergent momentum which could hold equities up into late December, or we might see a more straight forward reversal from that island top / megaphone overthrow and print a significant down month for December.

We don’t yet see a significant reversal in the US Dollar, and the Indian, Japanese, Chinese and German stock markets are still motoring. Plus, Apple and the Nasdaq 100 reversal candles yesterday need follow through. So these are the threats, but it may be the point at which US equities start to lead to the downside.

Commodities started plunging in May 1929 and forewarned of the stock market woes (hat tip Edward Dowd). They began to tumble in May of this year too. Some are quoting oil’s fall as a stimulus, but it should be clear from associated developments in government bonds and the USD that this is a deflationary wave more in tune with 1929. But this doesn’t pin down when equities might tumble, only that they should be on borrowed time. The latest sunspot update suggests the same:

With the story of the topping process in stocks (which I have laid out in detail on the site) revealing a kick off Jan 1st 2014 and an intensification from the start of July, I maintain the probability that stocks are completing their topping out now, and keep a lesser likelihood as the end of December. Given the recent cross-asset developments in gold, high yield, government bonds and oil, I don’t see a stocks bull market extending into 2015. The Rydex allocations spike looks fairly terminal too.

The situation is fairly delicate at the moment, as a little more craziness can’t be ruled out. So we need to see a follow-though day to the downside. But I believe we are into the final price manoeuvrings before the heavy falls finally come to pass.