US equities unresolved still at the time of writing, but unlikely for long.

US small caps and European stock indices made a definitive trend change around the start of July, making what looks like second chance lower high peaks. The RUT was just unable to to take out its 4 March closing high, and as things stand the main speculation-excess targets of the R2K, biotech and social media all peaked end Feb / start March along with margin debt and the likely smoothed solar maximum. That’s a very close mirror of March 2000.

There has been a sharp deceleration in sunspots over the last few days as can be seen on the chart above, which further enhances the likelihood of the smoothed maximum being behind us, putting equities on borrowed time.

Based on the analogs of 1929, 1937, 1987, 2000 US indices and 1989 Nikkei, the second chance peak in these speculative indices and sectors should give way to a fairly relentless bear trend. Since July 3rd, they have indeed been suitably persistently weak, despite large cap strength.

For the large caps, the danger, to the bears, can be seen on the monthly charts. The NDX and SPX are still in accelerating trends:

The price action is consistent with the Nasdaq into 2000 or the Nikkei into the end of 1989. On a zoomed-out monthly view the shaping looks to some degree parabolic, but on a daily basis the action was not always up and nor is it now.

Despite the Dow printing a new high again yesterday, there have been some subtle changes recently. Gaps up have not run but petered out, some gaps down could not be recaptured intraday. NDX, INDU and SPX are all in the realm of potential double tops with 3 July, and volume has picked up the last couple of days. Divergence with small caps and European indices is unlikely to be maintained for long, meaning either they pull up and recover or US large caps roll over. I refer you to my last post and many previous charts as to the compelling case for it being the latter, and here a couple more: 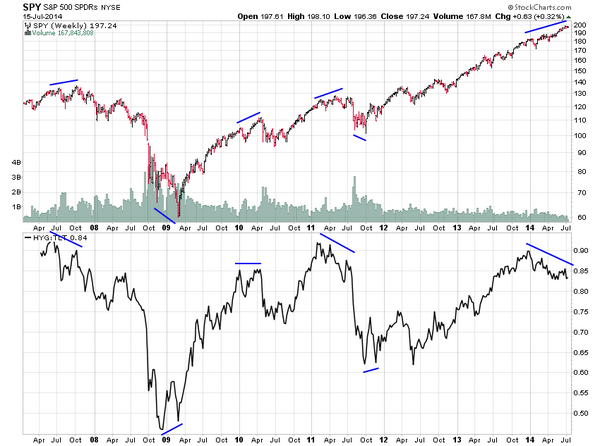 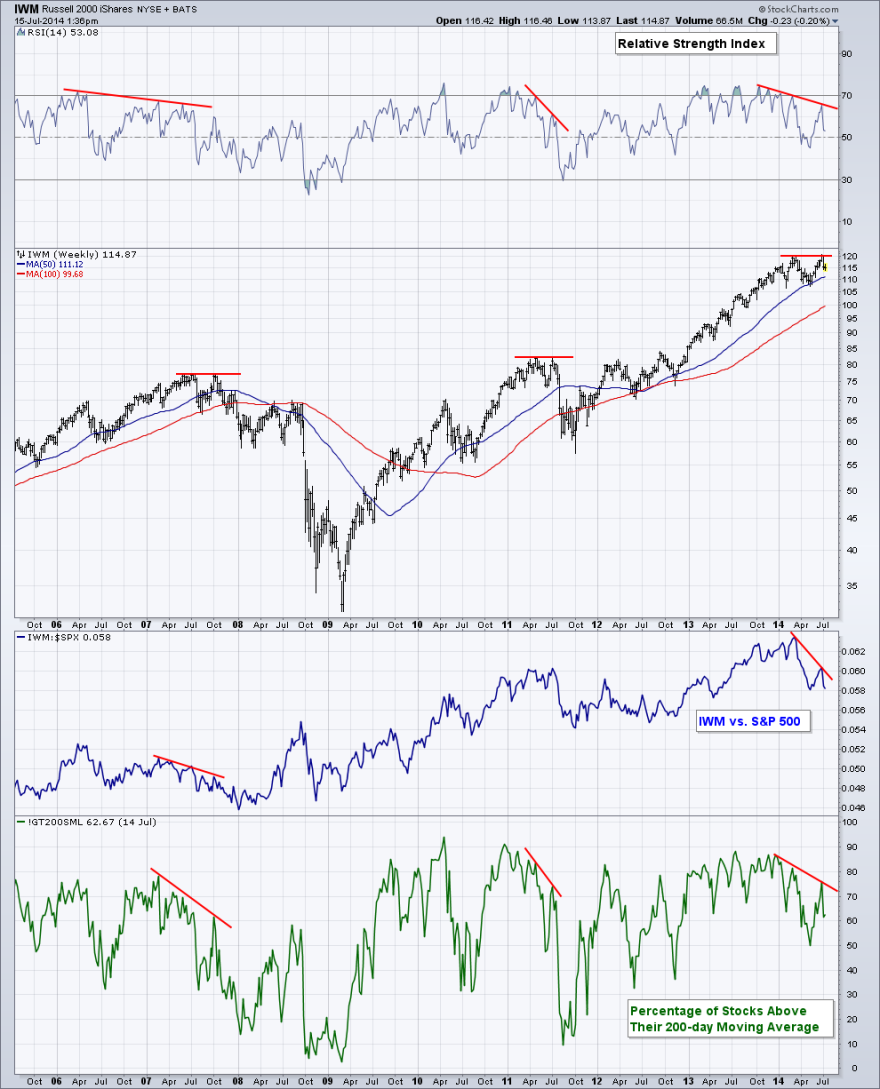 The record stretching of indicators, both in values and by time, means the correction, when it comes, is likely to be nasty. The leverage and lop-sidedness that has been built up suggests there will be a period of waterfall selling. I don’t share the view that the stock market will correct, say, 10% and make a new high into 2015. When US large caps roll over, too many indicators suggest that will be it. As noted above, I believe this is the second chance peak leading to the eventual sharp falls. Unlike 2000 and 2007, large caps have made higher high second peaks, rather than lower peaks, perhaps in keeping with the solar cycle and its unusual higher second peak. But behind these large caps higher highs second peaks, the divergences and indicators have been telling, such as margin debt declining.

What I’m looking for. Those subtle changes, yesterday’s Bradley turn, and the potential double top here: large caps can roll over here and fulfil the last post’s charts warning of immediate decline, resolving the divergence with small caps and Europe to the downside. This is my focus. If large caps do tip over here, I will be back on the attack on the short side. If they do not, I will be looking towards 26 July, the new moon, and the rolling over of the geomagnetic seasonal calendar, as the next potential peak. I still can’t rule out the possibility of large caps continuing to accelerate upwards, but the developments in small caps and Europe and the subtle behind-the-scene changes mean the odds have shifted yet further towards large caps finally giving up. Regarding gold: it could not build up on the recent breakout so was sold-off again. I believe it will take off when large cap equities finally roll over.