The solar cycle matters for this reason:

Peaks in the activity of the sun produce speculative peaks by variation in human excitement, so it is a trading timing tool.

It has been a thrill to watch in real time this solar maximum unfolding and the associated congregation of indicators suggesting a historic top in equities occurring close the solar maximum again. Each of those indicators that I have aggregated has a reliable history on its own, so the question is why the stock market has not tipped over to the downside more decisively by this point. It looks like the answer may be that the sun is still increasing in activity:

4 consecutive daily sunspot prints over 240 over Easter weekend keeps the visual in trend in ascendance.

Previous speculative peaks occurred close to the smoothed solar maximum and on a monthly spike in sunspots, so the question is whether this solar strength can be maintained for the rest of April and for the weeks and months ahead to drag the smoothed maximum from end-2013 to mid-2014. Either way, this continued solar strengthening was a bad miss by most solar scientists, with only SIDC in my congregation running such an alternative, and kudos to Mark for suggesting the maximum would extend.

Note also how at this solar maximum we are seeing a higher later peak in a fairly typical double peak, whereas previous cycles tended to produce the higher peak first: 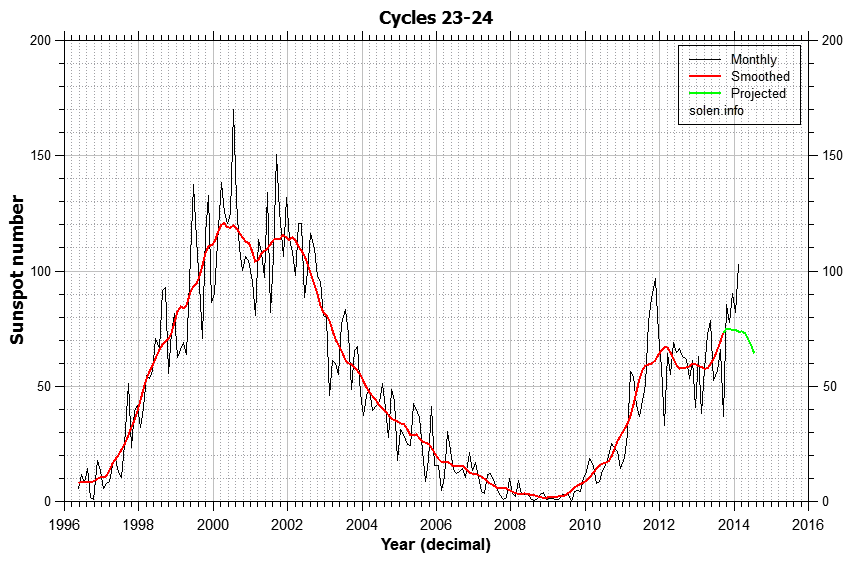 This adds to the peculiarity of this solar cycle maximum.

The implications for trading depend on how the solar maximum continues to unfold. If the smoothed solar maximum is dragged out to mid-2014 then we may then be looking at the Autumn/Fall for a true stock markets sell-off. If on the other hand sunspots quieten down in the weeks ahead then the smoothed solar max may be retained as ~Dec 2013 and the stock markets may be about to decline in a more major fashion. But either way, the persistent strength in the sun’s activity beyond the end of 2013 through to now has been a key and unexpected factor in maintaining speculation and keeping the markets elevated despite indicators at historic readings.

I now look to the end of April to see how the monthly sunspot count shapes up, to see how solar scientists adjust their forecasts, and to see whether other measures of speculation, such as margin debt, show a peak or continue to rise.