Here is the CCI commodity index and the CRY (Thomson Reuters) commodity index. All I can say is the combined picture for the two still remains unresolved.

The possible breakout and end to the 2011-2013 bear market should be clear to see, but at this point it hasn’t done enough, and a breakdown beneath the horizotnal support could still come to pass. Looking at individual commodities within that things aren’t much clearer. Gold and silver could be basing currently, or it could be weak action before further falls. Crude oil dropped sharply on Wednesday, looking bearish for the commodity indices, and then rose sharply on Thursday, looking bullish: confusing action. Certain agri commodities have broken out of their downtrends, others not. Simply put, we’re just going to just have to wait longer to see which way the complex is heading.

Turning to stocks, US equities have underperformed since the government shutdown, correcting more than other country stock indices. A sharp and broad reversal upwards yesterday made for what looks like a fake-out (failed breakdown) on the SP500 that is normally bullish, and puts the German Dax, Aussie ASX and Hong Kong Hang Seng (as examples) all back flirting with major breakouts:

The 90% up-day in the US yesterday, together with the break back into the wedge is typically bullish, whilst acknowledging that nothing has been resolved on US shutdown or debt ceiling, and developments or non-developments in that arena can still buffet the market around. Nonetheless, the broader market action is still showing signs of a cyclical topping process: the volatile moves up and down since May, the divergence in breadth, the overthrow moves in nominal price and margin debt this year which echo 2000 and 2007. Here is the SP500 on a monthly view with a momentum indicator:

It is typical at the end of a cyclical bull for the market to lose momentum as buying is exhausted, with alternating and short up and down legs in a range at the top, before selling in earnest begins. The momentum indicator has made three lower highs since May. If this is a cyclical topping process then any further leg up should be weak, with more loss of momentum, more new percentage new lows, narrower market participation. If this is not a cyclical topping process then we should see the opposite: strong rallying with renewed momentum and broad participation, breaking away from the range in play since May. From a technical perspective, looking round major indices such as the Dax, ASX and Hang Seng, it should be clear how such strong rallying could erupt from collective major breakouts. However, I believe the weight of evidence instead supports a topping process unfolding, pending further developments, and as such believe the danger lies in long positions rather than short.

Below, gold and silver secular bull market charts (from Robert Williams, hat tip Roger Reynolds). Both have primary uptrend still in tact. Gold has corrected to the 38 fib, silver to the 61 fib (silver acting as a leveraged gold, both up and down). Gold could yet correct further to the 50 fib and meet the rising primary support, circa $1100. However, gold corrected around 33% in 2008 and then resumed the bull, and has corrected a similar percentage this time round. Drawing these factors together, we would appear to be at a key make-or-break point for precious metals, similar to (and playing into) the picture on the commodities indices. 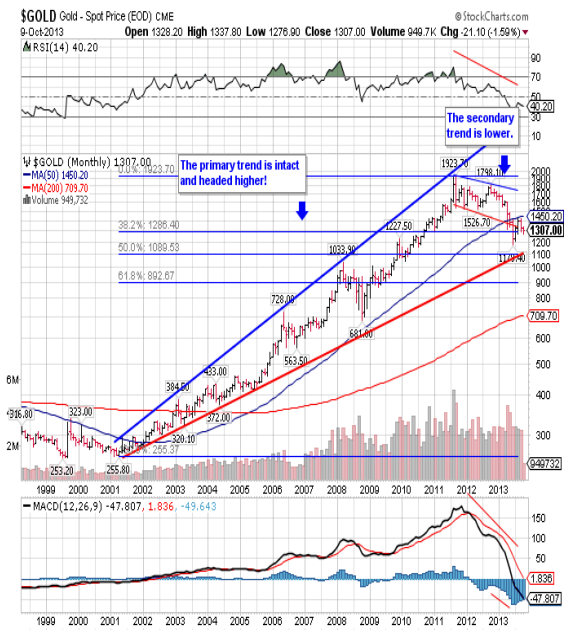