The rally in equities persists. The momentum continues but the warning flags are increasing, in a fine balance. When we eventually pull back, I maintain this should then be followed by a further higher high, but with divergences and weaker internals, to make a topping process. UBS have echoed this in their chart here:

I have predicted a scenario ahead this year similar to 2007-8, marked by the box below. When stocks made a topping process in late 2007, similar to the distribution patterns shown above, commodities only made their parabolic acceleration once the equities topping process was underway.

Both energy and basic materials are late stage cyclicals, which mean they are typically amongst the last sectors to rise and top out, and are reflective of commodities gaining momentum usually later than equities.

I am suggesting that there is a possibility therefore that we need first to see equities entering their multi-month topping pattern before commodities truly accelerate. Once stocks pull back, after this current rise, I believe that process will have begun. The question is how far and how long equities can rise in the mean time, and it’s a difficult one to call. If the pullback were to begin today I could point to a handful of indicators supporting that. Yet, as noted in the last post, both overbought and overbullish readings can persist for a little while before a pullback. So I watch and wait.

But back to commodities. Oil is the outstanding performer of the moment, most other commodities are lacking momentum. I previously studied commodities peaks and solar peaks in detail (here), which revealed that commodities should typically begin an acceleration around 12 months before the solar peak, which is currently forecast for around September of this year, but that commodities typically make their parabolic peak after the solar peak. Drawing that analysis together with the above, I would suggest that commodities, as a class, are overdue a momentum move, but could need equities to lose momentum and begin their topping pattern before commodities take over.

There is historically a close correlation between commodities. Below are shown food and oil. If oil can maintain its recent strength, food should follow (oil is a key input in the agri process).

Food and gold prices also have a close historic relationship, as shown in this previously posted chart:

Yet there has been a disconnect in the last 18 months between gold and general commodities, shown here:

This helps to explain why gold in particular is struggling to advance, as other commodities need to catch up (or gold pull back). So let’s see if oil is taking a role as the leader here, and that foodstuffs will join in the rally, and then precious metals.

Gold miners made what looked like a high volume capitulation at the end of last week, which together with very negative sentiment puts them in a good position to reverse trend here. But a reversal in gold itself is of more importance, and aside relations with other commodities, we can also look to the US Dollar and central bank balance sheets as a driver. Here is Euro-USD and Fed balance sheet modelled together versus gold:

In 2013 the Fed balance sheet is forecasted to expand significantly, based on its QE plan, and currently the Euro is technically bullish versus the dollar. So here is a potential catalyst for gold.

Real interest rates are also important for gold. With treasury yields rising currently but inflation fairly tame, the real interest rate trend is going the wrong way (even though real interest rates remain negative). However, a rising oil price has the potential to push on inflation and turn that trend back. Rising agricultural commodity prices would also push on inflation, and this brings us back to the feedback looping between commodities. Essentially, we need oil to maintain momentum, or, say, agri commodities to join in the momentum, for the whole complex to begin the feedback looping which should result in a parabolic finale.

A reminder of other factors. The solar maximum later this year should inspire more speculation into commodities, but also protest and war. Rising food prices typically play into the latter. The NOAA climate chart that I displayed last week showed a trend that, if still in tact, could produce a record hot year this year. If so, that would be a big push on agri commodities. And by history, the secular commodities bull should end in a parabolic mania of some degree. Below is the equally weighted commodities index – did we see that mania into the start of 2011, or is it still ahead? 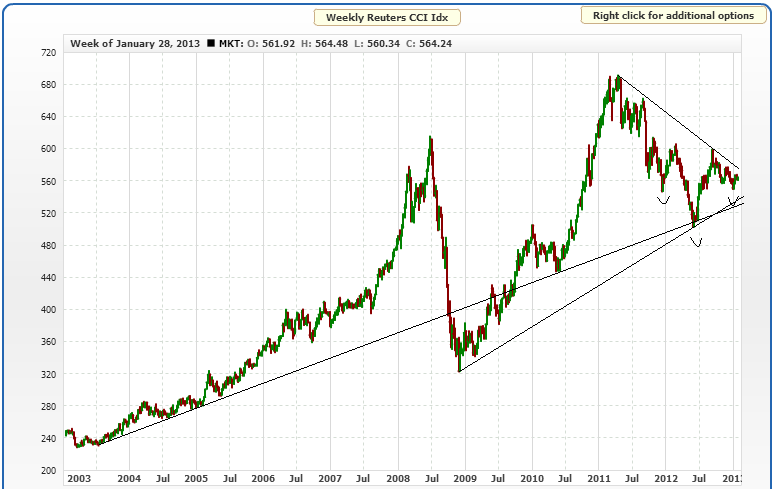 I have marked on the chart an inverse head and shoulders pattern, formed throughout 2012, that could potentially catapult commodities upwards and out of the triangle to give much greater weight to the ‘peak ahead’ camp. Alternatively, a break beneath the secular support line would make the ‘peak was 2011’  view the convincing one.

I believe the conditions are still right for the secular commodities finale to occur in 2013, potentially making a final top by as late as H1 2014. Economic data, leading indicators and US dollar fortunes all need monitoring in order to nurse those conditions forward, but it really comes down to whether commodities can now gain momentum  in that relatively supportive environment and then build to a speculative climax. I am itching for that collective momentum, but as outlined above, we may need to be patient a little longer whilst equities ease out of their momentum and into a topping process, handing the batton over to commodities and the late cyclicals.