The latest leading indicator readings from the Conference Board came in for Spain and Japan, both in the negative. The table below has turned from almost all green to at least half red. 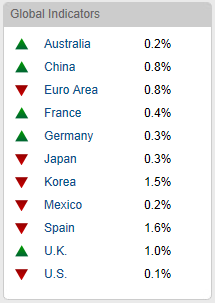 The OECD leading indicators for June are in, and the picture is mixed. USA, Japan and Russia are both positive and upward trending. UK, Germany, Canada and Brazil are negative but trending upwards. China and India are both negative and trending downwards. 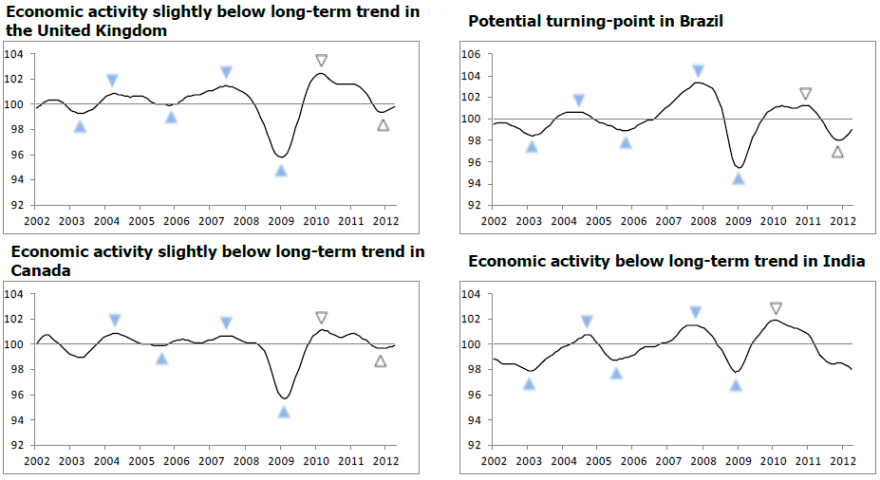 ECRI leading indicators for the US have dipped into the negative and the trend is down. Note that their indicators have been very volatile since 2008 and two dips to -10 in 2010 and 2011 did not bring on either a recession or a bear market.

Drawing all together, the picture is one of mixed to negative, globally. There is the potential that we are seeing a new turn up, looking at the likes of the UK, Brazil and Canada, that may be followed by the weak turning up also, such as India. However, there is also the potential that the weak could drag down the others, and that the current outperformers, such as USA and Japan, are starting to turn down. Based on solar cycles we are due a natural upswing. That aside, we have evidence of a new round of global government invervention, in rate cutes and various stimulus/aid measures. The question is how far they go and how quickly, to help leading indicators improve. With Spanish and Italian CDSs still pressuring record levels, the ECB is going to need to act again. The FOMC on 20th June is also going to be important.