The first day of decent selling…. but exhaustion signals appear.

Yesterday was the highest downside volume day since March 2012. It ended the longest streak of no >2% up or down day on the SP500 since May 2012. It was the 8th largest daily percentage move in the Vix of all time, at >30%.

Equity put/call hit an extreme in fear. Here is the indicator’s history:

Now here is a zoom on those previous instances of prints >0.90:

Typically they marked lows or were a precursor to a low within a few sessions.

Next is bullish percent as a ratio to total put/call. I’ve previously highlighted the divergence in this indicator with the market since January 2014. However, because it has been in decline, yesterday’s selling took it to the kind of deep level associated with previous bottoms.

I also previously highlighted the divergent breadth in stocks above the 50MA. Again, because it has been in decline, yesterday’s selling has now put it in a zone that could spell a bottom, particularly if we combine it with the reading on Tick. The most similar such pairing from recent times would have been last August’s low.

The picture from stocks above the 200MA isn’t dissimilar. 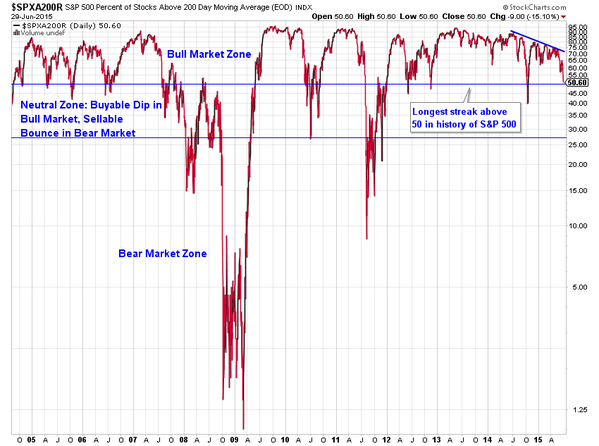 Lastly, here is Vix to Vxv. It too has spiked to the kind of level associated with previous lows, with the exception of the 2011 falls. 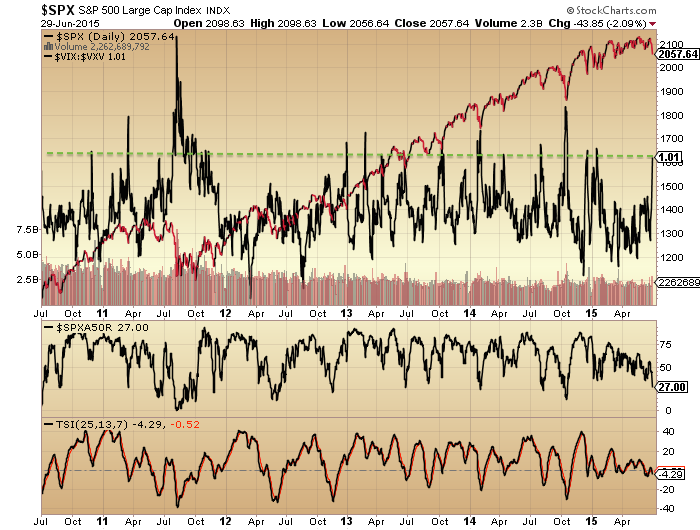 Here is a zoom on recent incidences of this indicator spiking over 1:

We can see that a bottom occurred within several sessions of Vix:Vxv coming off its spike high.

Drawing all these indicators together, odds are that we see a rally from a low within a few sessions. Thursday’s full moon would fit with this too. As per my note yesterday I entered short RUT and IBB early and took a chance. They and the Dow positions are all in profit but in light of the above indicator readings I will be looking to cut back again later this week, anticipating a lower low from here within the next several of days but then a rally back up in July, perhaps to the mid-July new moon.