This is the technical picture for the Nasdaq, the leading index. In a very tidy channel since the bull market began in 2009, it has made a series of advances and consolidations. I have marked the horizontal supports for the consolidations – in each instance the market retreated to the previous bull market high and successfully backtested it without dropping below it. This has happened again in 2012, with the market holding above the 2011 highs. In short, the bull market is very much in tact from a technical perspective. The Nasdaq is currently at the bottom of its bollinger bands, suggestive of an up-move ahead, however there is scope for the overall consolidation to be extended deeper into 2012 without compromising either channel or horizontal support.

Barry Bannister send me his latest macro deck and I pick out this one chart below which shows his expectations for where stocks are headed. He forecasts reflation for H2 2012, like myself, to push up stocks. He quotes four phases to a cyclical stocks bull in a secular bear, and accordingly anticipates a kind of overthrow move to complete this cyclical bull (similar analysis and forecast to Laslo Birinyi). 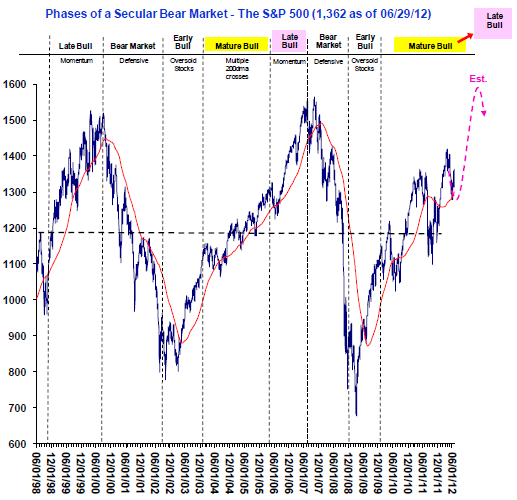 Now I’m going to contrast the above with Jan’s charts that show the key cycles on the Norwegian index. What both show is a decline into 2013. He expects the decline in equities to begin now or at the very latest October.

Eurodollar COT one year advanced suggests a rally in equities into the US elections. Presidential cycles also predict a rally from here into November. The next major Bradley turn is 28th July, and after that 22nd December. I concur with those commenters that Bradley turns can be highs or lows and the siderograph is just a ‘best guess’ for which are likely to be which. Geomagnetism, by seasonality, becomes more intense in September and October, before lessening into year end, whilst sunspots should continue their waving up towards the solar peak, still forecast to be Spring 2013.

So the question is, can we unite all the above?

The best fit is that stocks bottom out as we turn into August, and then rally into year end (Eurodollar, presidential, Bradley turns, sunspots, Bannister, Birinyi).

The alternative is that stocks top out as we turn into August and fall into the US elections (Jan’s cycles, geomagnetism, Bradley siderograph). By Jan’s cycles we would in fact keep falling into mid 2013.

As previously noted, I believe that we will see a pick up in leading indicators in the weeks ahead, which will inspire the best fit to come good. As I expect stocks to top out before the solar peak (and associated secular commodities peak) it is still possible that they then fall into mid-2013 in line with Jan’s cycles. Let’s see if equities rally or fall out of this next week’s Bradley and FOMC. By my shorter term models, we should fall into the FOMC, and then bottom out to rally.